“Eureka” is a strange, perverse film about passion and greed, and it leads us through a labyrinthine story to a simple message: Money can't buy you love. It stars Gene Hackman as an obsessed gold prospector in the Yukon, who screams into the wind that he will "never make a nickel off another man's sweat." He stalks out into a blizzard, almost freezes to death, and then is saved through the supernatural intervention of a fortune-teller (Helena Kalianiotes). She arranges for him to find the mother lode and become the richest man in the world.

We then flash forward to the 1930s, when he lives on his own Caribbean island. He should be a man without worries, but he is desperately unhappy because his beloved daughter (Theresa Russell) has married a scheming playboy (Rutger Hauer). While monsoons blow and parrots squawk, he bans Hauer from his table and vows to see him dead. "At first I thought you wanted my daughter. Then I thought you wanted my gold," Hackman screams at him. "Now I think you want my soul." He is right, but there is a battle over that soul, and the other contestant is the daughter herself. The film's director, Nicolas Roeg, says he has friends who seem to be the soul-clones of their parents, and apparently the closing passages of “Eureka” are meant to be seen with that notion in mind. Meanwhile, there are so many other notions to keep in mind that the film all but sinks under the weight of its inspiration.

Roeg is a fascinating director. Remember some of his films: “Walkabout,” “Don’t Look Now,” “Performance,” “The Man Who Fell to Earth,” “Bad Timing.” They almost all seem to deal with supernatural intervention in the affairs of man, and with the way those mysteries get tangled up with the bedsheets. His films are also a visual feast; Roeg, a former editor, loves to construct complicated fantasies out of images and memories, shocks and beautiful meditations,

Straightforward storytelling is not his strong point. But so what? The basic facts of “Eureka” (man strikes gold, becomes rich, grows old and jealous, suffers for greed) are familiar from Jack London, Edgar Allan Poe, and von Stroheim's “Greed.” What Roeg brings to the party is a flair for the sensational, for characters who are larger than their weaknesses, who are connected to great archetypal forces. Hackman is wonderful here, with the intensity of his obsessions, and once again Russell (still only in her mid-twenties) is brilliant; in some ways this is her movie, and she steals scenes from everybody except, sometimes, Hackman. If “Eureka” is not completely successful if, indeed, it is sometimes merely silly and often confusing, maybe that's the price we pay for Roeg's intensity. At least it is never boring. 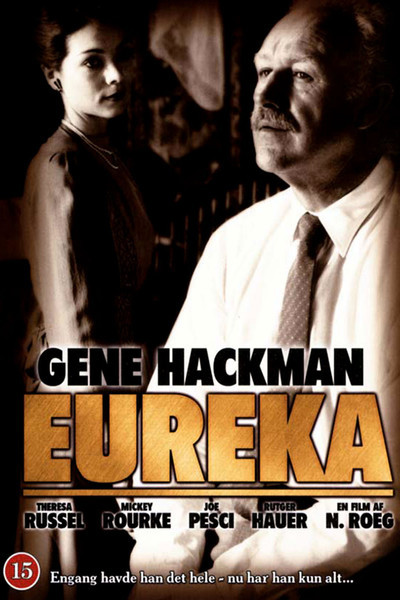