Most great documentaries are triumphs of people-watching. "The Dog" is a triumph. This account of the true story behind "Dog Day Afternoon" is filled with individuals so fascinating that my first thought after watching it via screener was, "I wish I'd seen this with an audience." A hypothetical theater showing "The Dog" would, I'd imagine, be periodically seized by the best kind of laughter: the laughter of affirmation; laughter that says, "Yes, that's it, that's how people are."

Co-directors Allison Berg and Frank Keraudren seem to be operating from a place of nonjudgmental curiosity, so pure and sustained that it becomes indistinguishable from love. They can't get enough of John Wojtowicz, the Brooklyn wisenheimer who called himself Little John due to his admitted lack of endowment and yet still had the cojones to join up with a pre-Stonewall political activist group, rob a bank at Avenue P and East Third Street in August of 1972 to pay for his lover's sex change, and talk smack to a cop who dared call him a homophobic slur while reporters and TV cameras and locals watched. The filmmakers love Little John's mother Terry, too. They love his ex-wife Carmen, and his prison lover George Heath, and his great love Liz Eden, aka Ernest Aron. And why wouldn't they? Every one is a marvelous real-life character.

Little John, here a fiftysomething snaggle-toothed showboater whose every utterance sounds like dialogue from an unproduced one-man show, is a magnificent ruin of a man. When the filmmakers started interviewing him in 2002 he was more old Joe Pesci than young Al Pacino, but still riveting, thanks to his signature mix of honesty and hucksterism. When he puffs himself during in an anecdote there's often a twinkle in his eye, as if he assumes the folks on the other side of the lens are friends who'll see through him no matter how much he self-aggrandizes and exaggerates.

He says was a closeted Catholic who had his first homosexual experience in the Army; that he was a decorated Vietnam veteran loved his wife and kids but was bisexual and couldn't keep half of his sexual identity under wraps; that he joined the Gay Activists Alliance in the Village mainly to get laid; that he adores his mother and his entire extended family; that he's been capable of sexually predatory behavior throughout his life, and that even in his fifties he wasn't above cruising for sex in public parks with homeless or drug-addicted men who'd do almost anything for a few bucks; that he had violent altercations with Eve, including one that involved a knife, which he didn't pull on her, swear to God, officer; that every one of his long-term lovers, male or female, meant something to him. None of this seems contradictory. Little John may be little, but he contains multitudes.

Without making a big deal of it, "The Dog" also positions Little John as minor but genuine (though accidental) folk hero during one of the most tumultuous periods in gay and lesbian history. The smug modern mind may have trouble imagining this skinny, short, darkly handsome man holding court (and taking hostages) in a working-class ethnic section of Brooklyn in 1972, three years after Stonewall, much less understanding how mind-boggling it must have been to watch him kiss another man on the lips on live TV—as if it were, in fact, just a boringly ordinary display of affection—and then respond to the crowd's catcalls and insults with curses and obscene hand gestures. The period's popular culture couldn't comprehend a gay man like Little John. He strutted and bantered and tossed money in the air. He had pizzas delivered to the bank. He was a live-wire New York character who just happened to be gay, and if you didn't like it, you knew what you could do with it.

On top of all that, Little John was—in this instance, anyway—truly romantic. For a film released in the machismo-obsessed, gay-baiting '70s, "Dog Day Afternoon" did a fine job portraying gay men as unique individuals, but it didn't get across the magnitude of Little John's gesture. Think about why he did it. Here was a man in love with someone who was biologically male but presented as female. Little Joe said he loved the male parts of Eve and couldn't Eve maybe leave those alone but get a boob job? Sort of split the difference, or something? Then Little John thought about it some more and said to hell with his own preferences, and moved heaven and earth to get the money Eve needed to go under the knife. He adored her so much that he was willing to accept her transforming herself however she wished. His grim slapstick odyssey from bank to bank in the lead-up to the standoff could have been scored to "What I Did for Love." Little John got 20 years for bank robbery and served five. He paid for Eve's sex change by selling his story to Hollywood. Love is strange. Love won.

One of the more sneakily amazing aspects of "The Dog" is the way it puts a sociological frame around all of this personal and criminal melodrama. It's one of the better documentaries of pre- and post-Stonewall gay life I've seen, thanks equally to its intimate newsreel and video footage of meetings and protests and TV news segments, and the deft way that it roots the political implications of everybody's decisions in the cold facts of lived experience. At first you may smile when you hear this sleazy, smirking hustler refer to his own role in "the gay revolution," as if he got into it to write manifestos and walk in the footsteps of Gandhi and King. "In those days, we did a lot of getting down," he brags. By his own admission he was more a hanger-on, in some ways a parasite, than a committed participant.

But the smile recedes as the film makes a case for every American being subtly affected by the changes occurring in gay and lesbian life, whether they were smack dab in the middle of that world or adjacent to it. Little John wasn't in the middle, but he was. He wasn't a hero, but he was—or he came across that way to some; or something; it's wild; it's chaos; it all just sort of happened. It had to happen. This sort of thing happened all the time in the '70s. The world kept flipping over and over and over like an airborne pancake.

The human face and voice are the real stars of "The Dog." Its true subject is not Little John's crime or the personal and historical circumstances that led to it, but the mysteries of personality. Every few minutes there's a revelation or admission that lesser documentaries would save for their finales, such as Little John confessing that he encouraged his partner-in-crime to force himself on a third wannabe-robber who eventually bailed out, or Terry admitting that she used to follow her son around the Village as he cruised (he had no idea). Just when you think the story can't possibly take you anywhere new, it does. A revelation in the final third shines new light on everything Little John and his mother told us.

In an era of increasingly big, loud, glitzy productions that pulverize virtual cities with a quip and a shrug, it's easy to forget how thrilling it can be to watch a person sit in a chair and talk: proclaiming and preening; denying and avoiding; shaping a life story as if it were the narrative of a Hollywood blockbuster, only to have the tale's construction undone, or deepened, by a cut to another witness who tells us no, sorry, that's not how it happened. "The Dog" is a humbly extraordinary film. 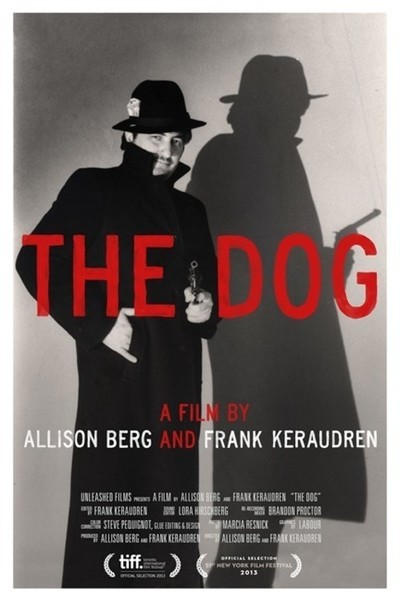