Michael Mann's "Thief" is a film of style, substance, and violently felt emotion, all wrapped up in one of the most intelligent thrillers I've seen. It's one of those films where you feel the authority right away: This movie knows its characters, knows its story, and knows exactly how it wants to tell us about them. At a time when thrillers have been devalued by the routine repetition of the same dumb chases, sex scenes, and gunfights, "Thief" is completely out of the ordinary.

The movie stars James Caan as a man who says he was "raised by the state" and spent eleven years in prison. As the movie opens, he's been free four years, and lives in Chicago. He is a highly skilled professional thief -- a trade he learned behind bars from Okla (Willie Nelson), a master thief. The film's opening sequence establishes Caan's expertise as he cracks a safe with a portable drill. Caan sees himself as a completely independent loner. But we see him differently, as a lonely, unloved kid who is hiding out inside an adult body. He's a loner who desperately needs to belong to somebody. He trusts his partner (James Belushi), but that's not enough. He decides, on an almost abstract intellectual level, to fall in love with a cashier (Tuesday Weld), and in one of the movie's best scenes he tells this woman, who is essentially a stranger, all about his life in prison and his plans for the future. She takes his hand and accepts him.

But there is another person who comes into his life: Leo, the master criminal, the fence who sets up heists and hires people to pull them. Leo, in a wonderfully complex performance by the sad-faced Robert Prosky, knows how to enlist Caan: "Let me be your father," he says. "I'll take care of everything." He does. He even supplies Caan and Weld with an illegally obtained baby boy when they're turned down at the adoption agency. But once the thief goes with Leo, his life gets complicated. The cops seem to be on his case. His phone is bugged. Everybody knows his business. The movie leads up to one final caper, a $4 million diamond heist in Los Angeles, and then it ends in a series of double crosses and a rain of violence.

This movie works so well for several reasons. One is that "Thief" is able to convince us that it knows its subject, knows about the methods and criminal personalities of its characters. Another is that it's well cast: Every important performance in this movie successfully creates a plausible person, instead of the stock-company supporting characters we might have expected. And the film moves at a taut pace, creating tension and anxiety through very effective photography and a wound-up, pulsing score by Tangerine Dream.

If "Thief" has a weak point, it is probably in the handling of the Willie Nelson character. Nelson is set up well: He became Caan's father-figure in prison, Caan loves him more than anybody, and when he goes to visit him in prison they have a conversation that is subtly written to lead by an indirect route to Nelson's understated revelation that he is dying and does not want to die behind bars. This scene is so strong that it sets us up for big things: We expect Willie to get out, get involved in the plot, and be instrumental in the climax. That doesn't happen. There is a very nice courtroom scene, during which you'll have to pay close attention to catch on to the subverbal and illegal conversation conducted between the judge and the lawyer. But then the Nelson character quickly disappears from the movie, and we're surprised and a little disappointed. Willie has played the character so well that we wanted more. But, then, I suppose it is a good thing when a movie creates characters we feel that strongly about, and "Thief" is populated with them. It's a thriller with plausible people in it. How rare. 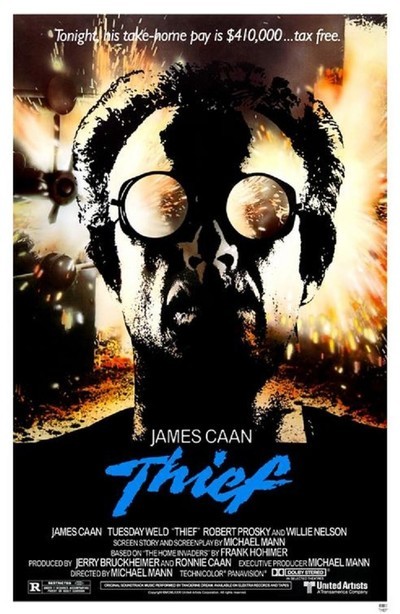