If you need a quickie just call me

What can compare with the white-knuckle suspense of uploading a file? "Deception," that's what. This is a movie jam-packed with all the thrills of watching that little progress bar grow and grow until it fills the alloted space in the pop-up box on your computer screen.

The most thrilling sequence in the movie actually does involve a race between a disconnect countdown and a file upload on accountant Ewan McGregor's IBM laptop. If you had a lot of rhythmic, percussive music blaring away while you were transferring files on your laptop, you might find it exciting, too. But maybe not.

"Deception" -- which, deceptively, has been tracked under such aliases as "The List," "The Tourist," "Manipulation" (in France) and "Untitled Hugh Jackman Project" -- ostensibly trades in the title commodity. Meek, bespectacled auditor Jonathan McQuarry (as in McVictim, played by McGregor) meets suave, predatory lawyer Wyatt Bose (Jackman) in a conference room late one night while the office cleaning lady and the office cleaning gentleman sneak off into the men's restroom to polish each other's linoleum.

"Are you working late or are you downloading a multitude of porn?" Wyatt asks, unidiomatically. Are square-jawed big-city lawyers really this inarticulate? Perhaps it is a clue that he is not who he doesn't quite seem. Wyatt whips out a joint, and the unlikely new best friends smoke away the best evening Jonathan claims to have had since he saw Van Halen in '87. Before he lets that one slip, he confesses that he likes the order and symmetry of numbers, yet he sometimes looks out the high-rise glass windows of whatever firm he's auditing and he sees "life literally passing me by." Accountants and their metaphors: They will not be stopped!

Soon Wyatt and Jonathan are hanging together at the gym (mixed doubles, anyone?) and visiting clubs where plasticine hookers wear looking-glass eyes ... while straddling ladders and cozying up to brass poles to the steady throb of medum-volume techno-lite muzak. (In the movies, all clubs play this gaudy music so you'll know lewd sex is available -- and that the characters are willing endure excruciatingly banal synth tracks in order to get some. If the music is any good, wanton sex is unobtainable.)

But when Jonathan accidentally picks up Wyatt's cell phone after an intimate lunch in the park, he finds himself on a do-call list that would be the envy of every nascent Eliot Spitzer. Hot Wall Street babes begin calling him (well, really Wyatt) for anonymous sex at snazzy New York hotels. Oh, why not? Once he gets into the groove and gets Charlotte Rampling to explain the very simple rules to him ("No rough stuff and no names"), he takes to sexual moonlighting like a whore to culture.

If you check out the definition of the word "deception" in a dictionary, you'll find that it involves duplicity, a ruse, a trick. And therein lies the trouble with this movie. O, "Deception," where is thy deceit? Do you believe that Hugh Jackman is terrifying and sinister, and that Ewan McGregor is as timid as a wee fluffy bunny until he starts mating like one? The plot may say "yes," but your gut probably says "no." You see it on the screen, the story insists it's happening, but you do not believe it for a second. Indeed, "Deception" contains not one credible moment. Not one. Not a line, a gesture, a look, a staging, a situation, a location. Nothing. Even Madrid is unconvincing as itself -- and it's Madrid!

Likewise, the movie's New York is as lovely as the women in the montage sequences, but they all look artificial, although they are gorgeously photographed by Dante Spinotti ("Heat" (1995), "L.A. Confidential," "The Insider"). Stanley Kubrick had solid aesthetic reasons for making sex and the city look dreamlike and unreal in "Eyes Wide Shut." Here the flashing breasts are as carefully exposed as the lighted windows in the skyscrapers. They're fleetingly pretty, but are supplied for decoration only.

Long after "Deception" should have been over, the "twists" keep on coming. Most memorable is a transition from a closeup of a plastic wind-up duckie to a long shot of a seagull. That one I did not see coming. Everything else is equally risible, made all the more so by the filmmakers' determination to nail down every last painstakingly delineated plot point while ignoring the great black holes of story and characterization that long ago rendered it all so very pointless. 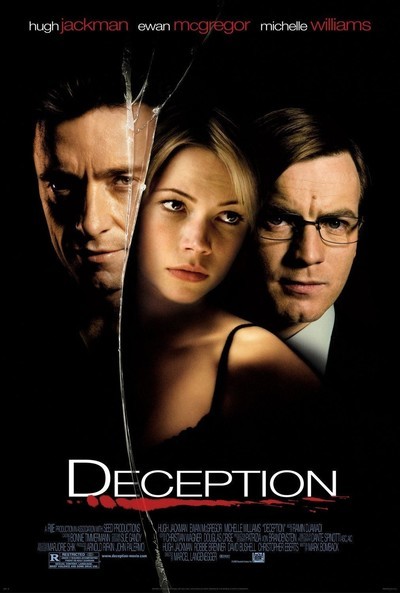 Rated R for for sexual content, language, brief violence and some drug use