A police procedural plus

The opening scenes of "L.A. Confidential" are devoted to establishing the three central characters, all cops. We may be excused for expecting that they will be antagonists; indeed, they think so themselves. But the film has other plans, and much of its fascination comes from the way it puts the three cops on the same side and never really declares anyone the antagonist until near the end. Potential villains are all over the screen, but they remain potential right up to the closing scenes. What the three cops are fighting, most of the time, is a pervasive corruption that saturates the worlds in which they move.

The movie also documents a specific time when the world of police work edged into show business. These days, when we can watch video recordings of cops actually busting suspects, when celebrity trials are shown on live TV, when gossip is the prime ingredient of many news outlets, it is hard to imagine a time when crime and vice lived hidden in the shadows. But they did, and the tipping point when that era ended must have been in the early 1950s, with the rise of instant celebrities, scandalous tabloid magazines like Confidential, the partnership between Hollywood and law enforcement agencies and the end of the media's reticence about seamy subject matter. "L.A. Confidential" (1997) shows the current era of sensationalism being born.

The first voice heard from the screen comes from the confiding, insinuating publisher of Hush-Hush magazine, Sid Hudgens (Danny DeVito). He sets the tone: "Insiders" know the score and are getting away with murder. His most valued contact is Detective Jack Vincennes (Kevin Spacey), the technical adviser on "Badge of Honor,' a "Dragnet"-style TV show. Jack also stars in some of Hudgens' scoops. They set up celebrities or politicians in compromising situations, Vincennes breaks in to bust them and Hush-Hush gets the story.

Vincennes will be one of the film's protagonists. The other two cops are Officer Bud White (Russell Crowe), who believes in bending the law to enforce it, and Detective Ed Exley (Guy Pearce), a straight-arrow type whose self-righteous morality gets on the department's nerves. These three cops, so different from one another, all possess some essential quality of honor that draws them together in untangling the film's web of corruption.

For much of its running time, "L.A. Confidential" seems episodic -- one sensational event after another, with no apparent connection. Mickey Cohen, the head of organized crime in L.A., has just been sent to prison, and now hit squads are rubbing out his top lieutenants. A millionaire named Pierce Patchett (David Strathairn) has sidelines in slick porn and high-priced call girls, and specializes in prostitutes who have had plastic surgery to make them resemble movie stars. A bunch of drunken cops beat up Mexican suspects and get their photos on the front page. Exley and Vincennes, for quite different reasons, testify against their fellow officers, breaking the department's code of silence. There's a massacre at the downtown Nite Owl Cafe, and a cop is one of the victims. Calling sternly for justice to be done in all of these cases is ramrod-stiff Capt. Dudley Smith (James Cromwell), who presides at morning roll call

The plot, based on the novel by James Ellroy, can only be described as labyrinthine. For long periods, we're not even sure that it is a plot, and one of the film's pleasures is the way director Curtis Hanson and writer Brian Helgeland put all the pieces into place before we fully realize they're pieces. How could these people and events possibly be related? We don't much mind, so long as the pieces themselves are so intriguing

Consider the business of the call girls who have been "cut" to make them look like movie stars. One of them, Lynn Bracken (Kim Basinger), looks like Veronica Lake, but the truth is, she's never had plastic surgery. White tracks her down because she's the friend of a girl who was killed at the Nite Owl. Then he pays a return visit because he is powerfully attracted to her, and they fall into bed without having had six words of personal conversation. Is that typical behavior for a hooker? Does she have another motive? As the Basinger character plays out, her motives and real feelings coil about one another, creating a deep and sympathetic character. Despite Crowe, Pearce and Spacey, it may be Basinger who gives the film's best performance. Her speech to Exley, about how she sees Bud White, is a monologue as simple as it is touching.

White has compromised himself by sleeping with a potential witness. He is also in deep with Capt. Smith, who uses him as a strong-arm man to beat up "suspects," including out-of-town mobsters (the message: go home). Vincennes compromises himself by ratting on fellow cops, something he says he would never do -- until his job on the TV show is threatened. And the straight-arrow Exley believes he could never bend the official rules of conduct, until he discovers that sometimes they need bending.

It would be unfair for me to even hint at some of the directions the story takes. Let me instead describe superb moments. One of the most famous comes when Vincennes and Exley enter the Formosa Cafe, a Chinese restaurant close to a Warner Bros. lot, to question the mobster Johnny Stompanato. He's with a date, who gives them some lip. Exley tells her to shut up: "A hooker cut to look like Lana Turner is still a hooker." Notice how the camera frames Exley in foreground and holds Vincennes in background, as he confides, "She is Lana Turner." This line, one of the movie's most famous, works so well, I think, because of the particular way Spacey delivers it, and the little smile he allows himself, and because Hanson does it in the same shot; a cutaway to Vincennes would have been all wrong

Vincennes has another emotionally wrenching experience involving a beefcake "actor" named Matt, who he first met during a bust set up by Hush-Hush. Now Hudgens has a scheme to lure the D.A. into a "sissy" scenario with Matt, and uses Vincennes to help convince the gullible kid this favor could open the door for him on the TV ("Like 'Badge of Honor" is gonna want him after he's been cover boy for Hush-Hush twice in a year," Hudgens gloats). How this assignation ends, and how Spacey as Vincennes reacts, amounts to a self-contained scenario on shame.

Consider, too, the choreography after two of the characters burst into the district attorney's office. The D.A. tries to put them off with a clever line about "good cop, bad cop," until he finds out in a horrifying way what "bad cop" can really mean. I've seen endless hours of violence in movies over the years, but hardly anything to equal what happens to the D.A. in a minute or two.

"L.A. Confidential" is described as film noir, and so it is, but it is more: Unusually for a crime film, it deals with the psychology of the characters, for example in the interplay between the two men who are both in love with Basinger's hooker. It contains all the elements of police action, but in a sharply clipped, more economical style; the action exists not for itself but to provide an arena for the personalities. The dialogue is lovely; not the semiparody of a lot of film noir, but the words of serious people trying to reveal or conceal themselves. And when all of the threads are pulled together at the end, you really have to marvel at the way there was a plot after all, and it all makes sense, and it was all right there waiting for someone to discover it. 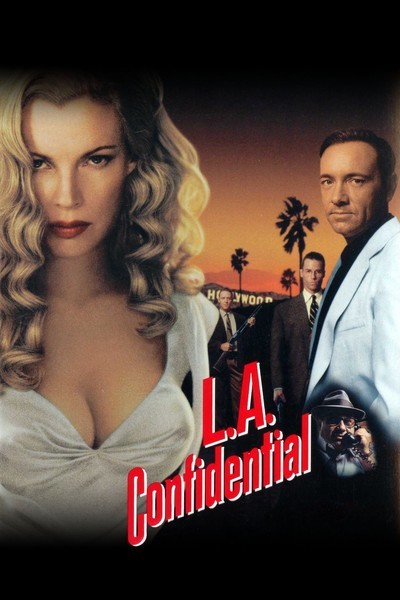