Did you ever wonder how Cruella De Vil, the vampy fiend from Disney's "101 Dalmatians," became evil enough to want to kill puppies and skin them for fur coats? You didn't? Ah, well—there's a movie about it, "Cruella." It stars two Oscar-winning actresses, runs two hours and 14 minutes, and reportedly cost $200 million, a good chunk of it spent on an expansive soundtrack of familiar sixties and seventies pop songs. It never answers the burning question posed by its own existence, though: what new information could possibly make us sympathize with the original movie's nuclear family-loathing, wannabe-dog-killing monster? The further away from "Cruella" that you get, the more its connection to "101 Dalmatians" seems a cynical attempt to leash an existing Disney intellectual property to a story that has no organic connection with it.

Directed by Craig Gillespie—who does a discount Scorsese, keeping the camera flying and the phonograph needles dropping, much as he did in "I, Tonya"—"Cruella" awkwardly combines a couple of popular modes. One is the origin story of a long-lived, brand-name character that didn't need an origin story: think "Solo: A Star Wars Story," "Pan," and the third Indiana Jones (the opening sequence of “The Last Crusade" showed Indy acquiring his whip, his chin scar, his hat, and his fear of snakes in the space of 10 minutes).

The other mode is the "give the Devil his due" story, represented on TV by dramas such as "Bates Motel" and "Ratched" and in cinema, with greater or lesser degrees of artistry, by Rob Zombie's "Halloween" remakes, which explored the abusive childhood of serial killer Michael Myers; by the billion-dollar grossing, Oscar-winning "Joker"; by Tim Burton's "Charlie and the Chocolate Factory," which gave Roald Dahl's inscrutable, faintly sinister clown Willy Wonka a tragic childhood; by the "Maleficent" films (the first of which had soul, at least); and by Broadway's Wicked, which presented the Wicked Witch as a victim of bigotry who embraced her own stereotype and used it as a weapon against tormenters.

The "Cruella" screenplay is in that vein, or sometimes it tries to be. But it's a mess, and it often seems to pause to remind itself that it's supposed to have something to do with "101 Dalmatians." The script is credited to Dana Fox and Tony McNamara, from a story by Aline Brosh McKenna, Kelly Marcel, and Steve Zissis. But although it was theoretically inspired by a Disney cartoon feature adapted from Dodie Smith's book, you could change the heroine's name and take out a handful of iconic production design elements (such as Cruella's yin-yang hair and Bentley roadster, and the spotted dogs) and have a serviceable feature in the vein of "Matilda," "Madeline," or "Lemony Snicket's A Series of Unfortunate Events"—or, for that matter, countless Charles Dickens film adaptations, wherein a plucky child or teenager navigates a world of useless or treacherous adults, becoming embroiled in plots to steal this object or expose that bad person.

Far from wanting to kill and skin dogs, a pre-Cruella girl named Estella (Emma Stone) owns one and dotes on it. As the story unfolds, we never see her being cruel to an animal or even saying an unkind word about them. She blames Dalmatians for the accidental death of her mother, a poor laundrywoman played by Emily Beecham; but that's more of a reflexive loathing, like hating the ocean if you'd lost a loved one to drowning. It's not as if she's sworn vengeance against canines generally. Our heroine (or antiheroine) is a sassy, plucky orphan who overcomes a life of deprivation on London's swingin' streets, joining up with a couple of buddies, Jasper (Joel Fry) and Horace (Paul Walter Hauser) and running grifts and scams. A brilliant draftswoman with an eye for style, Estella gets a job at a big department store. In a fit of pique, she reconfigures a shop window display because it showcases a gown she thinks is ugly (altering it in the process), and is summarily hired by the store's biggest vendor, fashion designer Baroness von Hellman (Emma Thompson). The Baroness is a staff-abusing control freak who nevertheless becomes the closest thing to a mentor and mother that Estella has had since her own mum's death.

Through a combination of incidents too tangled to recount here, the story morphs into an "All About Eve" riff about intergenerational rivalry between women in a creative workplace. Estella becomes increasingly resentful of the Baroness abusing her and stealing her glory; in time, she gradually learns what a vile person the Baroness is, and vows to humiliate and destroy her and usurp her spot as the top fashionista in London. All in all, not a bad setup for a knockabout comedy-drama set in what feels like an alternate universe—one that's more clever and colorful than the one we're stuck with, although Jasper and Fry never quite feel like more than obligatory sidekicks, and Cruella is given a childhood best friend, Maya (Kirby Howell-Baptiste), a photojournalist and gossip columnist who is reduced to the status of a plot device in the film's second half.

But Estella needs to become Cruella De Vil, just as Arthur Fleck had to become the Joker and Anakin Skywalker had to become Darth Vader, otherwise the production can't end up in theaters and on Disney+. And so "Cruella," much like the half-charming, half-pointless "Solo," has to shoehorn bits of lore and backstory and fanwankery into the narrative, none more risible than the moment where the heroine decides that Cruella needs an equally colorful last name and takes it from a certain model of automobile. Did we need that? Isn't the wordplay on "Devil" and "da vil(lain)" sufficient? Apparently not, and of course, young children are going to eat that sort of thing right up, even though it’s (amazingly) even worse than the scene in "Solo" where the intergalactic customs official assigns the hero his last name because he's traveling alone.

It's a bummer, really, because—like many a "How did this person become the character we already know?" films—"Cruella" is filled with situations, set pieces, and moments of characterization and performance that suggest it had everything required to stand on its own two high-heeled feet, minus the guardrails of intellectual property owned by the largest entertainment conglomerate the world has ever seen.

Estella's rightful desire to punish a bad person, for example, is intertwined with her drive to succeed in business, a touch of psychological complexity that the script isn't interested in unpacking because it already has its hands full making Estella a lively character in her own right and simultaneously setting her up to become Cruella de Vil—a transformation that makes increasingly less sense the more you learn about the character. A pity, that. People in real life often do good things for bad reasons and vice versa, or use their trauma as an excuse to lower themselves to the level of the person they've decided is (to quote Bond's nemesis Blofeld) the author of all their pain. Because the film can’t, or won’t, deal with the material that’s  right in front of it, it comes across seeming as if it wants credit for a sophistication it does not possess.

There's no denying that "Cruella" is stylish and kinetic, with a nasty edge that's unusual for a recent Disney live-action feature. But it's also exhausting, disorganized, and frustratingly inert, considering how hard it works to assure you that it's thrilling and cheeky. You get forty minutes into it and realize the main story hasn't started yet. Were it not for the acrobatic camerawork, the game lead performances by two Emmas, and the parade of eye-popping costumes by Jenny Beavan—eighty knockouts in 134 minutes, not counting the period-inspired background garb on the extras—it would be a nonsensical heap of broken images, as aesthetically bankrupt as "Star Wars: The Rise of Skywalker" and the first "Suicide Squad."

More vexing is the film’s reluctance to own the fact that—as one of many obvious song cues assure us—it has Sympathy for the Devil. She's not really the devil—not even remotely, as the script keeps telling us—but she is an awful person in many ways, and we are expected to adore her because the Baroness is so much worse.

The movie hits a giddy peak in its final act when it becomes a contest of wills. It’s here that the leads cut loose. Thompson in particular achieves cartoonish grandiosity, a supervillain armored in haute couture. Every head tilt, sneer, and side-eye is a non-physical assault on the Baroness' enemies and underlings, some of who don't realize they've been symbolically executed until their heads hit the basket. The effect is similar to what Cate Blanchett achieved in "Thor: Ragnarok," another film where the costumes were practically giving performances of their own, and the smartest actors in the cast knew how to merge with them.

But "Cruella" never embraces darkness in the way it keeps threatening to. There's nothing in this film remotely as powerful as the moment in the first "Maleficent" when the heroine awakens on a hilltop after spending the night with a duplicitous man and finds that her wings have been chopped off. It's an atrocity that reads as a sexual and psychological assault even though the movie never frames it that way, and it powers us through the rest of the story, freeing us to root for a traumatized, outcast monster. "Maleficent" eventually compromises, too, pulling back from its heroine's grimmest tendencies. But it's still as close as Disney has gotten to letting Satan footnote the Bible, and it looks better every time the studio releases something like "Cruella," a movie that flinches from its own premise, even as it looks great doing it.

"Cruella" will release simultaneously in theaters and on Disney+ with Premier Access for a onetime additional fee on Friday, May 28. 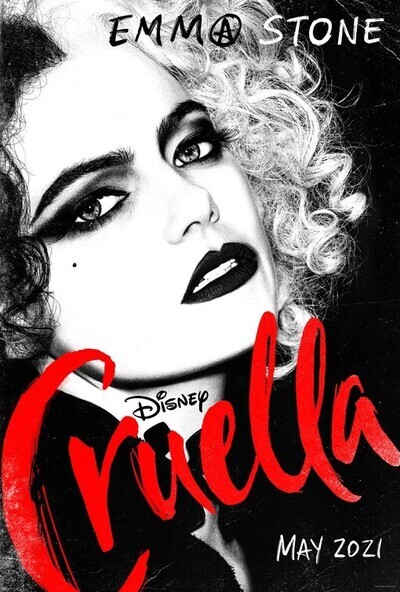 Writer (based upon the novel "One Hundred and One Dalmatians" by)