On the occasion of the arrival of a lumbering load of steampunk-drenched, whimsy-drained wrongheadedness disguised as family entertainment known as “Pan”—someone is really baiting headline writers with that pun-ready title—let us ponder this conundrum: Why do filmmakers continue to feel the need to squeeze all the joy and magic out of such a remarkably enduring figure of Edwardian-era make-believe as J.M. Barrie’s Peter Pan?

The whole “I won’t grow up” ethos of this aerodynamically gifted lad resonates today as proven by NBC’s live presentation of the stage musical version last year. But many current movies and TV series are already rotten with lost boys who act their shoe size instead of their age. Who needs another “Peter Pan” movie when you have the man-child-riddled oeuvres of Judd Apatow, Joe Swanberg and the Duplass brothers?

Then again, not even Steven Spielberg could resist squeezing Robin Williams into the role of an adult Peter in the midst of a mid-life crisis in 1991’s “Hook.” P.J. Hogan laced his big-budget visit to Neverland in 2003’s “Peter Pan” with a dark undercurrent of Freudian sexuality, including a bombshell Tinker Bell. And, in 2004, Marc Forster's “Finding Neverland” turned its sentimental spotlight on Barrie himself and his unconventional (and somewhat questionable) relationship with a sickly widow and her gaggle of sons.

But none of those efforts are quite as difficult to sit through as “Pan.” Every once in a while, a movie comes along that is so punishing to one’s mental and physical being that the narrative should be divided into rounds instead of acts. Add in dizzying 3-D effects and a booming sound system, and the pummeling can be rope-a-dope exhausting.

Granted, British director Joe Wright has shown a knack for enlivening literary classics such as “Pride & Prejudice” and “Anna Karenina” with stylish camera techniques and visual verve. But while he can do action and romance, as proven by "Atonement," he has never shown an affinity for full-out fantasy despite the once-upon-a-time elements in the girl-assassin thriller “Hanna.” And, with "Pan," he still hasn’t.

To begin with, the very premise feels off. Peter Pan isn’t a superhero and doesn’t really need an origin story, especially one that opens at a London orphanage for boys during the Blitz and borrows heavily from the “Oliver Twist” handbook. Peter the chubby-cheeked foundling becomes Peter the spunky 12-year-old in quick measure, and he is played by one of the film’s few assets, Levi Miller. The Australian native, a one-time Ralph Lauren model, exhibits a flair for comic delivery and handles the derring-do rather well. But he can’t save a sinking ship—or should that be a stinking ship?—all by his lonesome.

It seems that the nuns who run this orphanage are selling off their charges to pirates—even the sisters in “Philomena” didn’t stoop that low—who drop down from the ceiling on bungee cords and pluck them from their beds before stowing them aboard an airborne galleon to Neverland. That is where Peter meets his main nemesis, Blackbeard, the leader of this scurvy band of buccaneers. Never has Hugh Jackman looked so wretched, not even when he first got out of jail in “Les Misérables,” than he does decked out like a seedy conquistador with ghastly makeup, bad wig and gnarly teeth that suggests Don Quixote as a meth addict. Turns out, he sort of is. Remember how Dennis Hopper inhales that mysterious gas in “Blue Velvet”? Jackman dons a weird mask and huffs a rejuvenating substance, mined on the island with the use of the child labor supplied by the orphanage, known as Pixum—the street name for crystalized pixie dust.

Wright is usually pretty savvy about casting. After all, he put Carey Mulligan and Rosamund Pike in “Pride & Prejudice” and basically discovered Saoirse Ronan when he gave her a major role in “Atonement.” But he makes a couple fatal errors here. Garrett Hedlund might be easy on the eyes but he is awful on the ears with a grating cowboy drawl as James Hook, who is presumably the future Capt. Hook. This dreadful amalgamation of Sawyer from “Lost,” Indiana Jones and Slim Pickens from Dr. Strangelove forms an alliance with Peter after they hijack a pirate ship and take off for the woods.

That is where they find big casting mistake No. 2: Rooney Mara as hatchet-wielding Tiger Lily, who is traditionally supposed to be a Native American princess. Remember all the fuss about a Caucasian like Emma Stone trying to pass as a half-Hawaiian, half-Chinese character in “Aloha”? Well, this is “Aloha” redux. There is an attempt to portray Tiger Lily’s tribe as a rebel collective of various races and nationalities. But why not hire a Native American anyway, especially considering how utterly bland Mara is in the part?

From the music (the soundtrack employs the anachronistic tunes “Smells Like Teen Spirit” and “Blitzkrieg Bop” for absolutely no reason, unless pirates are into grunge and punk) to the CGI tricks (to justify the 3-D, we get to follow the trajectory of a falling bomb, watch a floating chicken lay an egg and enjoy a fight conducted on a trampoline), “Pan” is a pandemic of poor choices. And no one is going to clap their hands to save it. 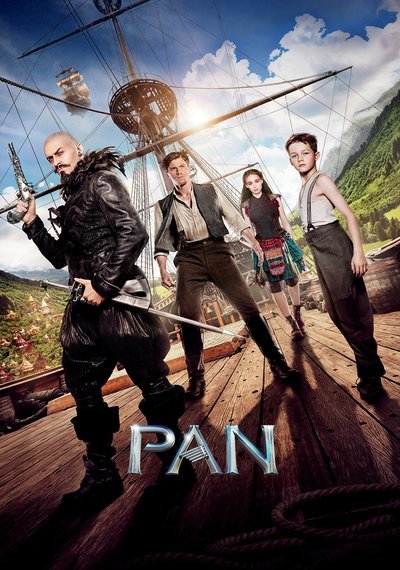