Star Wars: The Rise of Skywalker

“If this mission fails, it was all for nothing. What we’ve done. All this time.”

This may just be another inspirational line of dialogue from “Star Wars: The Rise of Skywalker,” but I couldn’t help thinking it defined the production of the film, too. After the divisive response to “Star Wars: The Last Jedi” and the firing of original director Colin Trevorrow, J.J. Abrams swooped back in to make sure the “mission” of this franchise was for something. And you can feel that weight of history and obligation, especially in the first hour of “Skywalker,” as Abrams delivers a movie that practically lifts off directly from “Star Wars: Episode VII - The Force Awakens,” using that film’s combination of action and fan service as a storytelling template way more than the previous movie. However, the inherent rush that came in revisiting this world four years ago is naturally lessened, replaced by something closer to desperation. Whatever one thinks of “The Last Jedi,” if that film was trying to build a new house on familiar land, this one tears it down and goes back to an old blueprint. Some of the action is well-executed, there are strong performances throughout, and one almost has to admire the brazenness of the weaponized nostalgia for the original trilogy, but feelings like joy and wonder are smothered by a movie that so desperately wants to please a fractured fanbase that it doesn’t bother with an identity of its own.

“The dead speak!” This is the opening line of the crawl of the last “Star Wars” movie in the new trilogy, and such an appropriate overture to a film that relies on your knowledge of dead characters to appreciate it. The “dead” in this case is Emperor Palpatine (Ian McDiarmid), who is revealed in the prologue to still be alive, planning a return of the Sith and the Empire. He’s been underground on a distant, untrackable planet, where he reportedly created Snoke, waiting for the heir to his throne to lead the resurrection of the Sith in the form of something new called the Final Order. Kylo Ren (Adam Driver) finds Palpatine, who instructs him to go find Rey (Daisy Ridley). A lot of “Rise of Skywalker” is about finding things or people, especially for the first half.

Rey is with the Resistance, still led by General Leia Organa (Carrie Fisher), and including Poe (Oscar Isaac), Finn (John Boyega), Rose (Kelly Marie Tran), Chewbacca (Joonas Suotamo), C-3PO (Anthony Daniels), and more, but their numbers and hopes are dwindling. The news that Palpatine is back and leading a fleet of ships strong enough to destroy planets means that they need to act quickly or risk total annihilation. Rey learns that she must find something called a Sith Wayfinder to get to Palpatine’s location, and the gang sets off on an adventure to find it.

The midsection of the movie is its most effective. After a clunky first act that’s filled with way too many scenes of people talking about who they are, where they need to go, and what they need to do when they get there, the film finally settles into a groove with an excellent chase scene that somehow both echoes “Return of the Jedi” and “Mad Max: Fury Road.” There is a nice subplot with an old acquaintance of Poe’s named Zorii Bliss (Keri Russell), and a fantastic, water-soaked lightsaber battle between Rey and Kylo. These scenes don’t have the weight of course-correcting that drags the first hour or the desperate need to please of the final half-hour. When “Rise of Skywalker” can just be its own fun, sci-fi adventure, it succeeds.

And, to be fair, the craft of “Skywalker” is incredibly high. Abrams knows how to design a major blockbuster like this one, and there are some remarkable set-pieces. He also is an underrated director when it comes to performers and gets the best one that Ridley has delivered to date. She’s the center of this film in many ways, and arguably the best thing about it. (Driver is very good too, for the record. Don't @ me, Kylo fans.) There are sequences and character beats in “Rise of the Skywalker” that truly work, especially when it doesn’t feel like it’s trying so hard to complete its “mission.” One just wishes they were embedded in a better film overall.

What’s telling about “The Rise of Skywalker” is how much I would have rather just learned more about Poe’s background, or the story behind Zorii, than experience the numbing overkill of the final act of this trilogy. For those who get a chill down their spine at a familiar John Williams composition in just the right place or even locations that this film returns to that you probably never thought you’d see again, “The Rise of Skywalker” offers just enough to make them happy. It’s not unlike a rollercoaster ride in that it has just enough thrills to satisfy fans, but you can also see exactly where the ride begins and ends before you strap in. Real movie magic comes with surprises and risk-taking, and those are undeniably absent here—I believe for the reason that people thought there was too much of both in the last film. I wanted more of Zorii because she’s one of the few characters or plot threads here that feels like it has potential to surprise. Almost everything else has been workshopped, focus-grouped, and even twitter hive-minded to a fine paste. It’s easy to digest, but not that filling or memorable.

Perhaps the best in-movie self-criticism is in the fact that Kylo Ren rebuilds his destroyed mask. Some fans of the series believe that “The Last Jedi” destroyed their favorite franchise, and here’s J.J. Abrams literally picking up the broken pieces and putting them back together. And yet, as he's told, you can still see the cracks, meant as a criticism of Kylo's uncertainty but reflective of the movie too. Sometimes you can’t just put things back together, and revisit history in a way that doesn’t feel craven and desperate. People will see the cracks. 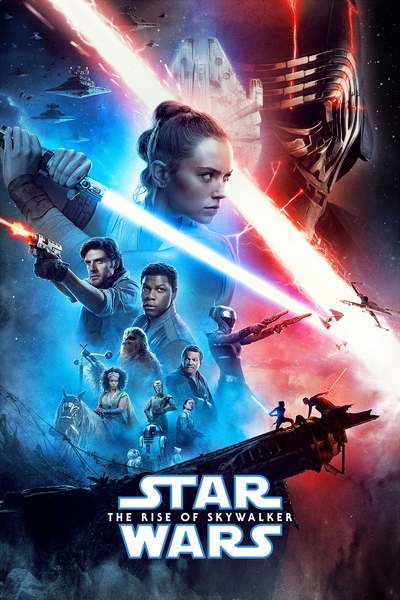