The "Sleeping Beauty" riff "Maleficent" is another overproduced summer spectacular, released into a world that has too many. It has sub-"Phantom Menace" landscapes and creatures, a bombastic and unmemorable score, and the sorts of chaotic images and fast cutting that signify a lack of true filmmaking imagination. It is truly a movie made by a committee: its direction is credited to Robert Stromberg, a longtime production designer, and its script to “Beauty and the Beast” scribe Linda Woolverton, but there have been reports of many studio-imposed rewrites, and reshoots by director John Hancock ("The Rookie"). But it's powerful anyway. As the title character, a misunderstood and wronged woman, Angelina Jolie has make-up enhanced cheekbones that could be registered as lethal weapons. Put them together with her wary cobalt eyes and ruby lips and the wings and horns that the character sports early in the picture, and you've got an image of female otherness as eerie as Scarlett Johansson wading into black goo in "Under the Skin."

The film's story is an example of what The Guardian's film critic Peter Bradshaw calls "that emerging post-'Wicked' genre, the revisionist-backstory fairytale," but it's affecting. It has a primordial edge that the clumsy filmmaking can't blunt. There are moments in "Maleficent" that are profoundly disturbing, in the way that ancient myths and Grimm fairy tales are disturbing. They strike to the heart of human experience and create the kinds of memories that young children—young girls particularly—will obsess over, because on some level they'll know, even without the benefit of adult experience, that the film is telling them a horrible sort of truth.

And at this point I should give you the opportunity to step away from the review, see the film based on the above description, and read the rest later to see if you agree. Fair enough? Good.

The tale begins with a flashback to Maleficent as a young girl fairy, befriending a farm boy who's snuck into her forest on a mission of thievery. They grow close and continue to see each other, even after the king of a human stronghold on the outskirts of the forest tries to invade Maleficent's domain and then watches in shock as the heroine and her tree-warrior pals lay waste to his army. As teenagers, the fairy and the human share a silhouetted lip-lock on a hilltop—"true love's first kiss," in the Disney parlance. He stops coming around, breaking the girl's heart. Years later, the now adult Stefan (Sharlto Copley) overhears the now-dying king promising his realm to anyone who can kill Maleficent. And it's here that we head into the first of the film's magnificently disturbing sequences.

I've read reviews complaining that we don't know enough about Maleficent and Stefan's personalities, much less the details of their relationship, which means that Stefan's betrayal "comes out of nowhere," and so does not make dramatic sense. This is a fair description (or complaint); but to me, the lack of development makes the twist feel more like something that might happen in a fairy tale—not a clean-scrubbed Disney fairy tale in which every plot twist is clearly delineated, but an ancient story that kids might listen to, rapt and horrified, then interrupt to ask, "By why would the boy do that to someone he loved?", whereupon the adult storyteller would explain that sometimes people do cruel things to people they love because they want things.

In any event, we know what's really going on in the scene. After snuggling with Maleficent on a hilltop, Stefan gives her a drink laced with a sleeping potion, prepares to murder her after she's passed out, then has a failure of nerve. He slices off her wings instead, and brings them to the king as "proof" that he did as promised. It's a symbolic assault with sexual overtones, specifically an attack that occurs after a woman has passed out. Maleficent doesn't just lose her wings; they're stripped from her, against her will. The attack is also a maiming or disfigurement that, in this context, feels like a gender specific physical "message," drawn from a continuum that includes everything from the punitive hacking off of a woman's long hair to clitoridectomy. (Jolie underwent a double mastectomy not long before the film was shot; it's hard to imagine her shooting this sequence and not putting it in a personal context.)

The scene of Maleficent waking up on a hilltop with huge scars in her back, then weeping with rage, is the most traumatizing image I've seen in a Hollywood fairy tale since the Christ-like sacrifice of Aslan in 2005's "The Chronicles of Narnia: The Lion, the Witch and the Wardrobe." It strikes so deep, and its impact resonates for so long after, that it makes the film's numerous missteps seem less like deal breakers than irritants. The assault transforms Maleficent from an unabashed heroine into an anti-heroine—a straight-up bad guy, as far as the story's terrified humans are concerned—and warps Disney's vanilla 1959 film into a conflicted revenge story with an unmistakable feminist undertone. It's the deepest betrayal imaginable. Every subsequent action Maleficent takes—including casting a spell on Stefan's daughter Aurora (played as a teen by Elle Fanning) that will send her into a coma at age 16 after a finger-prick by a spinning wheel needle—is driven by the trauma of that betrayal.

The film has a long way to go after that—plot-wise, I mean; at a sleek 98 minutes, this is a rare summer blockbuster that's as terse as the typical cartoon feature—and while "Maleficent" never rises to the peak of power that it attains when the heroine awakes without her wings, and its action sequences and ostentatious creature displays are murky CGI soup, it keeps the audience unbalanced in a good way. There's wasted motion in the plotting and a fair amount of confusion in how the script spells out what Maleficent can and can't do (if she can turn a raven into a male sidekick played by Sam Riley with a wave of her hand, and create a fire-breathing dragon with similar ease later on, why doesn't she just unleash an army of monsters on the kingdom and save herself a lot of bother?). But we always know what's at stake for her. We know where her head is at.

Despite winning a slew of deserved awards for early performances, Jolie has never gotten the credit she deserves as both an old-fashioned glamorous movie star and a skilled, thoughtful actress; this part fuses both sides of her talent. Her mesmerizing stillness makes us pay closer attention to Maleficent's every word and gesture than the film's screenplay deserves. We feel close to Maleficent even when she's doing the ice-mask-of-death expression showcased in trailers and in stills. We feel her conflicted feelings as she pretends to be the young Aurora's godmother, playing a role and then slowly becoming that role, just as we felt her rage at being violated and mutilated, and her need to make the human kingdom (whose representatives are all male) pay for what was done in its name.

I was looking forward to seeing Angelina Jolie play a Disney villain. That's not "Maleficent," obviously, but what she's asked to do is still fascinating. The character starts out good, turns bad for good reason, then tries to right the wrongs she committed in the name of righting wrongs. This is a film of Hollywood storytelling cliches, including the eat-your-cake-and-have-it-too villain death that lets the heroine seem noble while still satisfying the audience's bloodlust.

But it's also a film of resonant gestures and dream logic, in which ancient and contemporary predicaments jostle against each other: romantic betrayal or sexual assault, and their psychological aftermath; the fundamental differences between male and female minds; the way that patriarchal culture fuses women's sense of self-worth to their bodies; even the tangled maternal impulses that independent single women who never wanted kids might experience when they have to care for a child. The movie is a mess, but it's a rich mess. It has weight. It matters. Years from now you'll hear teenagers or college students bonding over having seen it as child and lost sleep over it, and its title will have acquired three more words, plus punctuation: "Oh My God, Maleficent!" 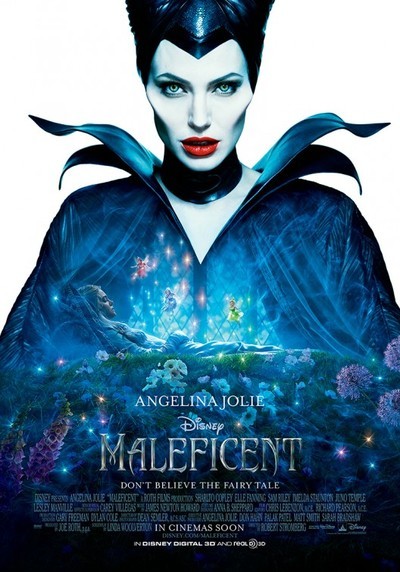 Rated PG for sequences of fantasy action and violence, including frightening images