In 1939, T.S. Eliot published a book called Old Possum's Book of Practical Cats, filled with poems he had written about cats to amuse his godchildren. A far cry from The Waste Land, almost 20 years before, Eliot's poems are sweet and sneakily profound, detailing different kinds of cats, their behaviors, personalities, and mysterious self-involvement.

Andrew Lloyd Webber took these poems, wove them together loosely, initially envisioning it as a concert or a chamber piece. Nobody saw the smash hit coming. How could you predict something like "Cats"' success? You couldn't. After a triumphant run in London, it moved to Broadway, where it promptly smashed every record in the book, becoming the fourth-longest running show in Broadway history. The appeal of the show is somewhat mysterious to me (and I've seen it twice. It was the second Broadway show I saw as a child), but obviously throngs of audiences have thrilled to it. Tom Hooper ("Les Miserables," "The King's Speech") has brought "Cats" to the screen, not doing much to it (what's to be done, really?), and over-producing much of it (the sets feel self-consciously referential, almost to the point of irony, but not quite). He casts some big names like Taylor Swift and Jennifer Hudson, and fills it out with lesser-known performers, as well as an enchanting newcomer named Francesca Hayward, a principal ballerina at the Royal Ballet, who plays "Victoria," the wide-eyed innocent cat thrust into a strange new world.

"Cats" features grown humans crawling around in furry suits pretending to be cats. There are some who will find this unbearably silly. Embarrassing even. I suggest these people never take an acting class or a movement class. They wouldn't last five minutes! "Cats" has a lot of issues, issues also present in the theatrical production (which didn't seem to matter to the audiences who flocked to it for 18 years). The story is thin, to say the least. There's almost no conflict. The structure of Cats is basically a talent show for cats, where the prize is a trip to the "Heavyside Layer" (i.e. "Heaven"), a place where the chosen cat moves on to the next of their (presumably) nine lives. It's a resurrection fantasy, a dream of cleansing and purification (all things which T.S. Eliot had very strong feelings about).

In the opening sequence, Victoria, abandoned by her owners, is taken under the collective wing of the gang of street cats known as "Jellicle cats." They sing a song explaining "Jellicle cats," but since the lyrics are almost totally incomprehensible during all the group numbers (a problem throughout, and it's inexcusable), it's hard to get a line on what is going on. Different cats take the spotlight, and perform a number about who they are. "Jennyanydots" (Rebel Wilson) is a lazy tabby who wreaks havoc at night. "Bustopher Jones" (James Corden) is a street cat decked out in tail-coat and spats. "Mr. Mistoffelees" (Laurie Davidson) does magic tricks. "Skimbleshanks" (Steven McRae) commandeers railway cars with the power of his tap-dancing.

Over all of this jazz-hands talent-show activity looms the there-and-not-there Macavity (Idris Elba), perched on the tops of buildings like an ominous bat-signal. Macavity shows up to wreck everybody else's "act," for no discernible reason (he's got Iago's "motiveless Malignity," to quote Samuel Taylor Coleridge). Taylor Swift plays Bombalurina, Macavity's gun moll sidekick. Many of the cats do their number and are never seen again. "Old Deuteronomy" (Judi Dench) is the wise elder cat, and the master of ceremonies. (A nice callback: Judi Dench was cast in the original London production, in the dual role of Grizabella and Jennyanydots. In fact, Trevor Nunn refused to come on board as director unless Dench was cast. Dench dropped out at the last minute, after snapping her Achilles tendon. Her appearance here has a lot of resonance for those who know the history.)

The central figure, besides Victoria, is Grizabella (Jennifer Hudson), a bedraggled cat who's the "Delta Dawn" of the cat world, shunned by the rest of the cats for her disreputable past. Grizabella sings "Memory," a show-stopping song based (loosely), on Eliot's poem Rhapsody on a Windy Night. It's a song about memory and moonlight and ... honestly, I get a little lost, trying to follow what she's so upset about. But the song is about the music, not the words: it's written for a major voice, with its slow build and thrilling finish. (I saw Betty Buckley do it, and the entire audience practically seized up when she hit those notes on "Tooouch meeeeee!"). Hudson does not disappoint, filling the lyrics with rage and pathos. (Watch what she does with "I must wait for the sunrise." Hudson's Grizabella is pissed when she sings that. Hudson makes sense of her character, personalizes the character, and sings the hell out of the song, all while wearing a cat suit. That's a pro.)

"Cats" suffers from a problem common in contemporary filmed musicals. The musical doesn't trust the audience, doesn't trust that the dancing in and of itself is exciting enough to hold our interest. There are all these dance numbers in "Cats," and Hooper spends so much time cutting around, changing angles, flying up to the ceiling, manipulating the images. You're denied the sense of sustained movement, denied the simple pleasure of watching dancers dance. If you go back and watch musicals in the 1930s, it's instantly clear how much we have lost. You are allowed to watch Fred Astaire and Ginger Rogers create the dance together, in real time. The camera follows them. The takes are long. There are only a couple of sustained shots in "Cats," and they stand out for the pleasure they bring. There's one moment where Hayward pirouettes in a large circle around the room, and the camera follows her, and it's a lyrical moment of graceful fluid movement. She's allowed to do the beautiful thing she knows how to do, and we're privileged enough to watch.

There's not nearly enough of that in "Cats," but I enjoyed the film for what it is. It's "London's Got Talent" for the feline set. 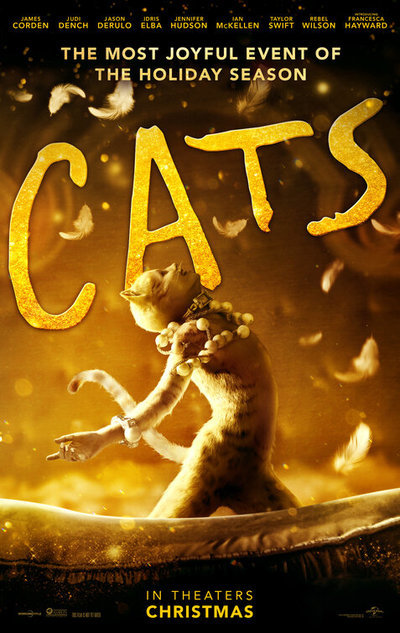 Rated PG for some rude and suggestive humor.