Thief of hearts (it's a metaphor)

The title of Anthony Minghella's dour "Breaking and Entering" is a metaphor. How do we know this? Well, for one thing, there's a burglary right at the start.

And the central character himself, Will Francis (Jude Law), demonstrates a fondness for metaphors in his dialogue. He's so fond of them that he even tells us he is fond of them in a climactic speech: "I don't even know how to be honest anymore. Maybe that's why I like metaphors." Then he goes on to describe a metaphor, where a circle represents his family, but it's also an enclosure or a cage, and he wants to feel comfortable in it but sometimes he feels trapped in it and sometimes he feels excluded from it.

It figures that Will is a partner in a London architecture and landscape design firm, since geometry looms so large in his consciousness. The guiding principle of his company, Green Effects, which is engaged in building a huge development in a squalid section of King's Cross, is to promote the concept of "built landscape as art, and one that requires as much care as any structure, and as much acknowledgment of design." And there you have another metaphor for "Breaking and Entering," a geometrical art-movie exercise defined by its structure and design.

The players on Minghella's cinematic Parcheesi board are arranged as follows: Will is in a 10-year relationship with Liv (Robin Wright Penn), the Swedish-American mother of a 13-year-old girl, Bea (Poppy Rogers), a gymnast with borderline-autistic behavioral disorders. On the opposing side is Amira (Juliette Binoche), a Bosnian Muslim widow and refugee who lives in a housing project with her difficult 15-year-old son, Miro (Rafi Gavron), who is also a gymnast of sorts. Miro uses his gravity-defying parkour skills to climb and break into buildings to steal electronic equipment for his Serbian uncle's burglary operation. To use a metaphor, these two mothers and children are opposing mirrored reflections of each other: blond/brunet, Swedish/Bosnian, upper-class/ working-class, girl/boy ... and Will finds himself caught between them. The symmetry is almost perfect. Which is in part why it all feels so planned, more like an architectural blueprint than a movie.

Every once in a while, to serve the higher call of the plotting, someone is called upon to make an utterly baffling and nonsensical move for no good reason. When Will, for example, leaves his business card with the mother of the boy he knows has been burgling his office and doesn't anticipate that the boy might feel just a bit paranoid and threatened by this mysterious gesture, you have to wonder how much humanity writer-director Minghella is willing to cede to his characters.

To help reinforce the title metaphor, up pops a Romanian prostitute. She is Oana (Vera Farmiga), who abruptly enters Will's car one night when he and his partner Sandy (Martin Freeman) are staking out their own office to catch the burglars.

No, it makes no sense whatsoever that Will and Sandy, the heads of this large company, would sit in their parking lot all night like this, or that Oana would bring Will coffee and sit in his car and not even charge him, or ... well, that's not the point, is it? She's breaking and entering, don't you see? She's slipping into his car and into his life, getting him to lower the power-windows of his smooth-riding, shock-absorbed existence. But Oana is just a metaphor tricked out in a big, blond wig. Once we get the idea -- actually, long after we get the idea -- the plot drops her like a hot potato. (That's a simile, not a metaphor. It's also a cliche, and so is she.)

With "Breaking and Entering," Minghella (best known as the director of "The English Patient" and "The Talented Mr. Ripley," starring Binoche and Law, respectively) seems to be trying his hand at a less ambitious Gonzalez Inarritu/Arriaga movie, like "Amores Perros" or "21 Grams" or "Babel," with interlocking mini-stories that illustrate how people from different backgrounds affect each other's lives. But what are the meaningful connections between these people's lives? Are they real and significant, or are they just plot contrivances, the manipulation of pawns in an onscreen board game? The actors are fine, but what does it matter when all they're given to play are avatars?

In the press notes, Jude Law spells it out: "The argument is: Is it worse to steal somebody's computer or is it worse to steal somebody's heart?" That's not even a decent metaphor (although, to be fair, the film is not about organ theft). It's simply an algebraic formulation: a > b or b > a, where "a" is "computer," "b" is "heart" and the nature of the relationship is "worse"? 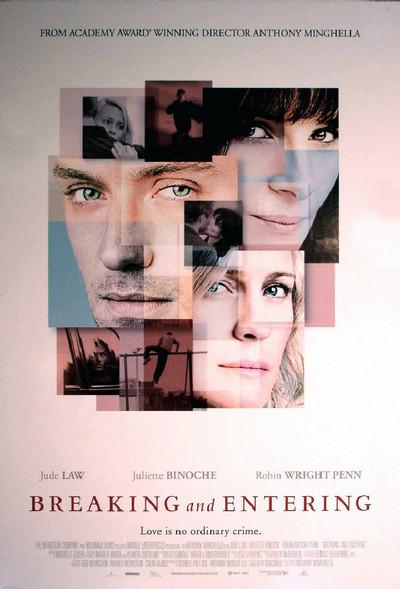 Jude Law as Will Francis