Backward into memory, forward into loss and desire, “The English Patient” searches for answers that will answer nothing. This poetic, evocative film version of the famous novel by Michael Ondaatje circles down through layers of mystery until all of the puzzles in the story have been solved, and only the great wound of a doomed love remains. It is the kind of movie you can see twice--first for the questions, the second time for the answers.

The film opens with a pre-war biplane flying above the desert, carrying two passengers in its open cockpits. The film will tell us who these passengers are, why they are in the plane, and what happens next. All of the rest of the story is prologue and epilogue to the reasons for this flight. It is told with the sweep and visual richness of a film by David Lean, with an attention to fragments of memory that evoke feelings even before we understand what they mean.

The “present” action takes place in Italy, during the last days of World War II. A horribly burned man, the “English patient” of the title, is part of a hospital convoy. When he grows too ill to be moved, a nurse named Hana (Juliette Binoche) offers to stay behind to care for him in the ruins of an old monastery. Here she sets up a makeshift hospital, and soon she is joined by two bomb-disposal experts and a mysterious visitor named Caravaggio (Willem Dafoe).

The patient's skin is so badly burned it looks like tortured leather. His face is a mask. He can remember nothing. Hana cares for him tenderly, perhaps because he reminds her of other men she has loved and lost during the war. (“I must be a curse. Anybody who loves me--who gets close to me--is killed.”) Caravaggio, who has an interest in the morphine Hana dispenses to her patient, is more cynical: “Ask your saint who he's killed. I don't think he's forgotten anything.” The nurse is attracted to one of the bomb disposal men, a handsome, cheerful Sikh officer named Kip (Naveen Andrews). But as she watches him risk his life to disarm land mines, she fears her curse will doom him; if they fall in love, he will die. Meanwhile, the patient's memories start to return in flashes of detail, spurred by the book that was found with his charred body--an old leather-bound volume of the histories of Herodotus, with drawings, notes and poems pasted or folded inside.

I will not disclose the crucial details of what he remembers. I will simply supply the outlines that become clear early on. He is not English, for one thing. He is a Hungarian count, named Laszlo de Almasy (Ralph Fiennes), who in Egypt before the war was attached to the Royal Geographic Society as a pilot who flew over the desert, making maps that could be used for their research--which was the cover story--but also used by English troops in case of war.

In the frantic social life of Cairo, where everyone is aware that war is coming, Almasy meets a newly married woman at a dance. She is Katharine Clifton (Kristin Scott Thomas). Her husband Geoffrey (Colin Firth) is a disappointment to her. Almasy follows her home one night, and she confronts him and says, “Why follow me? Escort me, by all means, but to follow me . . .” It is clear to both of them that they are in love. Eventually they find themselves in the desert, part of an expedition, and when Geoffrey is called away (for reasons which later are revealed as good ones), they draw closer together. In a stunning sequence, their camp is all but buried in a sandstorm, and their relief at surviving leads to a great romantic sequence.

These are the two people--the count and the British woman--who were in the plane in the first shot. But under what conditions that flight was taken remains a mystery until the closing scenes of the movie, as do a lot of other things, including actions by the count that Caravaggio, the strange visitor, may suspect. Actions that may have led to Caravaggio having his thumbs cut off by the Nazis.

All of this back-story (there is much more) is pieced together gradually by the dying man in the bed, while the nurse tends to him, sometimes kisses him, bathes his rotting skin, and tries to heal her own wounds from the long war. There are moments of great effect: One in which she plays hopscotch by herself. A scene involving the nurse, the Sikh, and a piano. Talks at dusk with the patient, and with Caravaggio. All at last becomes clear.

The performances are of great clarity, which is a help to us in finding our way through the story. Binoche is a woman whose heart has been so pounded by war that she seems drawn to its wounded, as a distraction from her own hurts. Fiennes, in what is essentially a dual role, plays a man who conceals as much as he can--at first because that is his nature, later because his injuries force him to. Thomas is one of those bright, energetic British women who seem perfectly groomed even in a sandstorm, and whose core is steel and courage.

Dafoe's character must remain murkier, along with his motives, but it is clear he shelters a great anger. And Andrews, as the bomb-disposal man, lives the closest to daily death and seems the most grateful for life.

Ondaatje's novel has become one of the most widely read and loved of recent years. Some of its readers may be disappointed that more is not made of the Andrews character; the love between the Sikh and the nurse could provide a balance to the doomed loves elsewhere. But the novel is so labyrinthine that it's a miracle it was filmed at all, and the writer-director, Anthony Minghella, has done a creative job of finding visual ways to show how the rich language slowly unveils layers of the past.

Producers are not always creative contributors to films, but the producer of “The English Patient,” Saul Zaentz, is in a class by himself. Working independently, he buys important literary properties (“One Flew Over the Cuckoo's Nest,” “Amadeus,” “The Unbearable Lightness of Being,” “At Play in the Fields of the Lord”) and savors their difficulties. Here he has created with Minghella a film that does what a great novel can do: Hold your attention the first time through with its story, and then force you to think back through everything you thought you'd learned, after it is revealed what the story is *really* about. 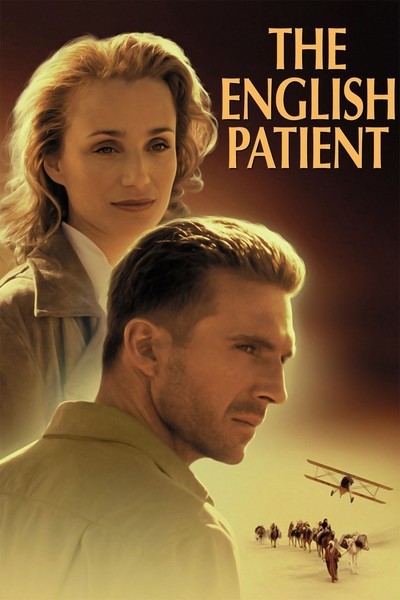 Rated R For Sexuality, Some Violence and Language