When does a bad, cheap horror movie becomes something more offensively horrible? When it pegs its generic nonsense on real-life tragedy and becomes exploitation. Ben Ketai’s “Beneath,” not to be confused with the Larry Fessenden film of the same name from last year, is the kind of mediocrity one finds on The Movie Channel on a Saturday night and pretty easily dismisses. There are a few decent performances, some (but not enough) moments of claustrophobia and it seems harmless enough. But the reason “Beneath” is a different level of bad comes down to that opening crawl that claims that it’s “Based on true events.” How so, you ask? Mines have collapsed on people before. That’s about it. Yes, this is a film that takes the tragedies that occured in Beaconsfield in 2006 and, of course, the internationally infamous incident in Chile in 2013 and turns it into a knock-off of “The Descent.” It wouldn’t be an issue if Ketai was interested at all in exploring the psychology of what happens to people trapped underground—that would actually make for an interesting, non-exploitative drama—but he’s not. At all. He wants to make a cheap horror movie. Well, he’s done that.

George Marsh (Jeff Fahey) is retiring after years as a well-respected coal miner. Of course, he has one last day on the job. Of course, his inexperienced daughter Samantha (Kelly Noonan) is going to join him. Of course, well, you know what happens next. George, Samantha, and their group of miners are stuck after a drilling accident leads to a collapse. With the methane underground not being blown out at the right rate, the air is getting “bad” quickly, leading to possible hallucinations. When Sam sees a fellow miner’s face melt like at the end of “Raiders of the Lost Ark,” is she going crazy or is there something supernatural going on “Beneath” the surface?

Ignoring the exploitation issue, “Beneath” never picks a tone. It’s been reported that Ketai came on to a project that was 100% supernatural in nature, more of a straight riff on Neil Marshall’s “The Descent” than a film that questions if the miners fighting for survival are going crazy or not. Honestly, that was probably a better film because at least it belonged to a genre. The tone, story, characters here all feel lost in the bland in-between. It’s just dull when it needs to click. It’s not fun enough to be grindhouse or real enough to be intense on a dramatic level. And so it’s nothing.

The only few redeeming virtues of “Beneath” come in performance. Jeff Fahey works in the right material, such as “Grindhouse,” and he grounds (no pun intended) this piece in a bit of personality. Noonan is actually better before they go underground, as she seems like she might actually be developing a character in the opening scene, only to watch her role get turned into a standard damsel-in-distress when the rocks hit the fan. And some of the supporting cast break through the tedium to find character beats, especially Brent Briscoe and Joey Kern. It’s just too bad they’re trapped in a movie that doesn’t care. 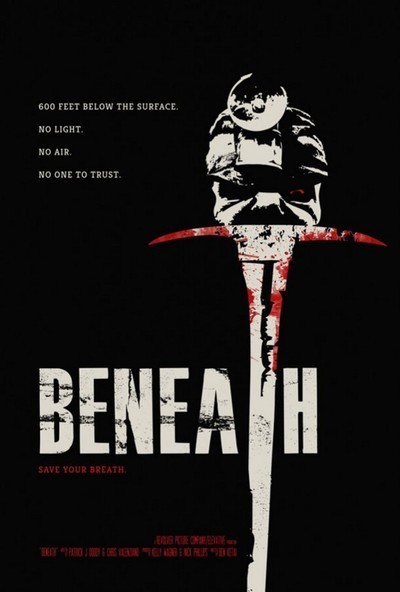