As a horror spoof, "Beneath" is and isn't what it looks like. If you've ever seen "Jaws," or "Friday the 13th," you are already familiar with the film's plot. A group of dimwitted horny teenagers celebrate the end of high school with a canoe trip, but are attacked by a giant man-eating catfish. "Beneath" is similar to "Piranha 3D" in that its creators encourage viewers to roll their eyes at the movie's distressingly callow meat puppet protagonists. But "Beneath" fitfully succeeds where "Piranha 3D" failed. As shrill as it often is, the film's situational peril makes otherwise unlikable characters sympathetic, or maybe just sympathetic enough.

Director Larry Fessenden ("The Last Winter," "Wendigo") and screenwriters Tony Daniel and Brian D. Smith want you to simultaneously empathize with pubescent horndogs who think with their crotches, and chafe at the thought of spending more time trapped with them. The protagonists are more often insufferable than not, but "Beneath" is still a weirdly personal and thoughtful generic exercise.

At first, it's hard to tell how intentionally satirical "Beneath" is. The protagonists are introduced to us gracelessly by Zeke (Griffin Newman), a geeky aspiring filmmaker who thinks he's going to be the next great auteur. Zeke is and isn't a running joke. He cattily introduces us to all of his frenemies, including Matt (Chris Conroy), a jock who didn't make it as a football star, and Kitty (Bonnie Dennison), a flirtatious human accessory who has slept with almost everyone on the ship, including best friend Deborah (Mackenzie Rosman).

Zeke is a caricature of the self-involved, camera-wielding ciphers who film everything in contemporary horror films. He's the least likable character because he treats his friends like film subjects ("Thanks a lot, Matt. That's a really great scene."). He's the clearest indication that "Beneath" is not a straightforward, C-grade Spielberg rip-off. But once the film's monster catfish shows up, it's apparent that the film's creators aren't just messing with viewers. Fessenden and his two screenwriters take time make fun of the cookie-cutter nature of contemporary, SyFy Channel-ready horror films. But they're also working inside that well-worn template.

The talent and intelligence that Roger Ebert hailed in his review of Fessenden's "Habit" is present in "Beneath," albeit in a diluted form. For example, the catfish is almost unimportant to the film's main drama; You can see this in the way that Fessenden shows the creature unceremoniously appearing from the bottom of the lake. The film's human characters pose the biggest threat to themselves. The group's camaraderie devolves a little more with each scene as they sacrifice each other for the sake of the greater good. In these scenes, you can see Fessenden's love for such horror classics as "Night of the Living Dead", even though the arguments that his protags have aren't about race or class inequality, but who's screwed whom.

There's the rub: how much does Fessenden and company's sincere interest in their characters matter, given that the film is humanizing ugly, self-involved brats? These kids are only as interesting as they are believably cruel. And while it's not a consistent problem, the filmmakers can't help but infrequently wink at viewers. Deb's last name is Voorhees, like the hockey-mask-wearing serial killer form the "Friday the 13th" movies. And at one point, Zeke wails, "Uh, have you ever seen 'Shark Night 3D?' It's exclusively about sharks in fresh-water lakes!"

Still, the film's creators succeed in making these desperate outbursts make sense. These lines are spoken by young characters, after all, and the film's actors make the most of that. Newman's performance is weirdly believable because Fessenden wants you to believe that Zeke is petty enough. So even when he speak in clichés, Zeke's only revealing how desperate he is. These kids are ugly, but they're believable, even when Zeke cackles, "Row! Row for your lives, ahaha!"

While the film's characters sometimes get in their own way, the scenes in which they make brutal utilitarian decisions are tense. And when the film does get violent, you can see that it was directed by someone that cared enough to make you uncomfortable.  It might be Fessenden's most accessible film. There's a lot of frustration on the screen, but only because Fessenden is once again insisting that there's so much more to horror films than banal characterizations and programmatic jump-scares. Ultimately, "Beneath" is better than your average Roger Corman clone because it is more serious than trivial. 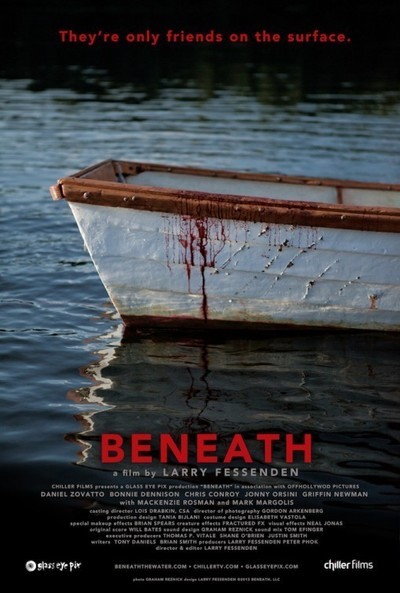