It occurs to me that 2003’s “Bad Santa” inadvertently provided the connective tissue between the genuinely subversive comedies of John Waters and the slack, fake-transgressive gross-out comedies currently in vogue, “Neighbors 2: Sorority Rising” and the films of the “Hangover” franchise among them. Coming a long 13 years after the original, “Bad Santa 2” provides, perhaps inadvertently, some backup evidence for my thesis.

The original “Bad Santa,” starring Billy Bob Thornton in the career-high title role (the character’s actual name is Willie Stokes, but few in the movie or outside of it ever actually call him that), was a scrappy indie movie, directed by Terry Zwigoff and executive produced by Joel and Ethan Coen, a deliberately nasty fusion of heist picture and black comedy with a touch of redemptive storytelling that elevated it to nearly-humanist. Albeit in a very cranky way. While the movie did not cross the $100-million box office mark domestically, it did a little better than what you’d call a cult movie.

The “Bad Santa” brand is strong in other places that count. Just look at the cast for the sequel: Thornton, Tony Cox, and poor Brett Kelly (who played the sad but highly unappealing role of snotnose kid Thurman Merman) are back, and newbies include such luminaries as Kathy Bates and Christina Hendricks. Octavia Spencer shows up for a cameo, playing a hooker who is hired to divest now-21-year-old-Thurman of his “cherry.” Bob Dylan’s version of “Winter Wonderland” appears on the soundtrack. Think about it: Bob Dylan can’t be bothered to go to Sweden to pick up his Nobel Prize, but he’ll let the “Bad Santa” sequel use one of his songs.

This sequel is directed by Mark Waters, whose “Mean Girls” strongly suggested that he knows funny. His subsequent filmography, which includes “Mr. Popper’s Penguins,” strongly suggests lost mojo. It’s clear from the get-go here that Waters is not so strong on areas in which Zwigoff excelled, like credible characterization. But for the demands of this particular movie at this particular time, here he doesn’t really have to be.

The movie begins with Thornton’s Willie once again in the grip of alcoholism-fueled depression and flirting hard with suicide. He’s saved by a seemingly inopportune visit from now-neighbor Thurman, who brings tidings from Cox’s Marcus. Willie is less than thrilled to hear from his one-time partner in crime (viewers of the first film will recall that things between the two did not end well then) and even less thrilled upon being persuaded to visit Chicago, where Willie learns the brains behind a new job is his long-estranged criminal mother, Sunny (Bates). The trio is going undercover to rob a popular and lucrative children’s charity, but it’s alright, really, because the crooked head of the charity skims almost all their earnings for his own enrichment anyway. Said head has a beautiful wife, played by Hendricks, who’s entirely innocent and also a recovering alcoholic. She takes some pity on Willie, who has trouble holding things together even as he’s casing the joint.

You see how all these components are supposed to line up, and then fall, right? Of course you do. As with so many comedies of its ilk these days, the story in “Bad Santa,” such as it is, serves little more purpose than a straight line on which to hang a lot of gags. This is not a formula that’s exclusive to contemporary comedies: it applies to a lot of Marx Brothers movies too. But such things are always execution-dependent, which in this case is a fancy way of saying the jokes had all better be good. It’s this distinction that makes “Duck Soup” a classic and “Go West” not so much in the case of the Marxes. As for “Bad Santa,” its joke batting average is about .400. And I’m being generous here. Even when the jokes don’t work, Thornton in curmudgeon mode is hard to resist. He can make an utterly unfunny line such as “Are you a complete f**king retard” dryly amusing, which I guess is kind of the point. Similarly, Bates and Cox clearly enjoy the interplay with Thornton, so much so that I was surprised not to see a gag reel over the end credits. It certainly would have been preferable to what IS seen over the end credits, a gross-out gag inspired by a practice first alluded to in popular culture in a John Waters film, as it happens. (That movie would be “Pecker.”)

However. Particularly in its portrayal of Thurman, who here isn’t so much misunderstood and unloved as he is dumber than a bag of rocks, this sequel actively devalues the compassion-on-the-knife-edge-of-misanthropy that distinguished the original in favor of a mainstream gross-out cartoon. The market demands nothing less, apparently. 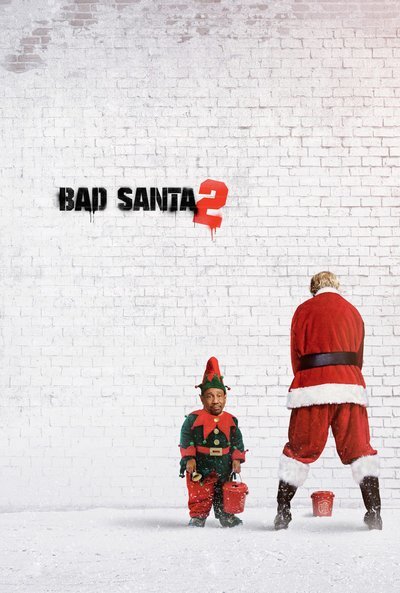 Rated R for crude sexual content and language throughout, and some graphic nudity.