In a wasteland of dumb movies about teenagers, "Mean Girls" is a smart and funny one. It even contains some wisdom, although I hesitate to mention that lest I scare off its target audience. The TV ads, which show Lindsay Lohan landing ass over teakettle in a garbage can, are probably right on the money; since that scene is nothing at all like the rest of the movie, was it filmed specifically to use in the commercials?

Lohan stars as Cady Heron, a high school junior who was home-schooled in Africa while her parents worked there as anthropologists. She is therefore the smartest girl in school when her dad is hired by Northwestern and she enrolls in Evanston Township High School -- which, like all American high schools in the movies, is physically located in Toronto. What's she's not smart about are the ways cliques work in high school, and how you're categorized and stereotyped by who you hang with and how you dress.

Cady makes two friends right away: Janis (Lizzy Caplan), a semi-goth whose own anthropology includes an analysis of who sits where in the cafeteria, and why; and Damian (Daniel Franzese), Janis' best friend, described as "too gay to function." They clue her in: The three most popular girls in the junior class are the Plastics, so-called because they bear an uncanny resemblance to Barbie. They're led by Regina George (Rachel McAdams), a skilled manipulator whose mother's boob job has defined her values in life. Her sidekicks are Gretchen (Lacey Chabert) and Karen (Amanda Seyfried).

Janis and Damian warn Cady against the girls from hell. But when Regina invites Cady to join their table, Janis urges her to: She can be a spy and get inside information for their campaign to destroy Regina. And she can recommend an obscure brand of Swedish "diet bar" actually used by athletes to gain weight, so that slim Regina with her flawless complexion can find out how it feels to be chubby and spotty.

"Mean Girls" dissects high school society with a lot of observant detail, which seems surprisingly well-informed. The screenplay by "Saturday Night Live's" Tina Fey is both a comic and a sociological achievement, and no wonder; it's inspired not on a novel but on a nonfiction book by Rosalind Wiseman. Its full title more or less summarizes the movie: Queen Bees and Wannabes: Helping Your Daughter Survive Cliques, Gossip, Boyfriends, and Other Realities of Adolescence. The mothers in the movie are not much help, however, and Fey's screenplay wisely uses comedy as a learning tool.

Fey also plays a math teacher named Ms. Norbury, who is more plausible and likable than most high school teachers in the movies, and also kind of lovable, especially in the vicinity of the school principal, Mr. Duvall (Tim Meadows, a former "SNL" star). Although many of producer Lorne Michaels' movies with "SNL" cast members have been broad, dumb and obvious, this one has a light and infectious touch, and it's a revelation to see how Meadows gets real laughs not with big gestures but with small ones: Notice particularly his body language and tone of voice during the new prom queen's speech.

The movie was directed by Mark S. Waters, who also made "Freaky Friday" (2003), a superior remake, and emerged from Sundance 1997 with "House Of Yes," an uneven but intriguing dark comedy with Parker Posey convinced she was Jackie Onassis.

Here he avoids amazing numbers of cliches that most teenage comedies cannot do without. When Cady throws a party while her parents are out of town, for example, a lot of uninvited guests do crash, yes, but amazingly they do not trash the house. Although Principal Duvall lectures the student body about a pushing-and-shoving spree, he does not cancel the prom ("We've already hired the deejay"). When Cady gets a crush on Aaron (Jonathan Bennett), who sits in front of her in math class, she deals with it in a reasonable way that does not involve heartbreak. When there are misunderstandings, they're understandable and not awkward contrivances manufactured for the convenience of the plot.

In the middle of all this, Lindsay Lohan, who was 17 when the movie was filmed, provides a center by being centered. She has a quiet self-confidence that prevents her from getting shrill and hyper like so many teenage stars; we believe her when she says that because of her years in Africa, "I had never lived in a world where adults didn't trust me." She never allows the character to tilt into caricature, and for that matter even the Plastics seem real, within their definitions of themselves, and not like the witch-harridans of some teenage movies.

Will teenage audiences walk out of "Mean Girls" determined to break with the culture of cliques, gossip and rules for popularity? Not a chance. That's built into high school, I think. But they may find it interesting that the geeks are more fun than the queen bees, that teachers have feelings, and that you'll be happier as yourself than as anybody else. I guess the message is, you have to live every day as if you might suddenly be hit by a school bus. 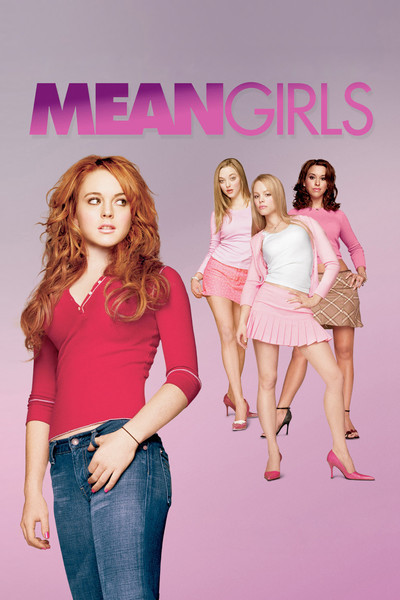 Rated PG-13 for sexual content, language and some teen partying