The hero of John Waters' “Pecker” got his nickname as a kid, we are told, by pecking at his food. Uh, huh. And guys named Studs had fathers in the tuxedo business. Pecker (Edward Furlong) works in a Baltimore sandwich shop and takes photos of the seamy side of life. He has an exhibit in the restaurant, a famous New York art dealer (Lili Taylor) happens to see it, and she mounts a show of his work in her gallery.

Of course all Manhattan is soon agog at the young genius, providing Waters with easy targets in the world of modern art. “Pecker's like a humane Diane Arbus,” one critic gushes, when in fact he's more like just plain Diane Arbus. But “Pecker” isn't really about art so much as about the way that fame and fortune upset Pecker's little world.

There is a strong streak of domesticity in Waters' plots (even the characters in “Pink Flamingos” have home lives, although you might need to leave the room if I described them). Pecker's dad (Mark Joy) operates a failing bar. His mom (Mary Kay Place) runs a thrift shop and sells the homeless “a complete Easter outfit” for 25 cents. (Pecker assures one of her potential customers that a winter coat is “flameproof--in case someone tries to set you on fire.”) His sister Tina (Martha Plimpton) is the emcee in a male go-go bar, issuing dire warnings against such misbehavior as “tea-bagging.” His grandmother (Jean Schertler) has a stand in front of the house to sell something called “pit beef,” and has a Virgin Mary statue that talks uncannily like one of Conan O'Brien's speaking TV pictures. And there is a kid sister named Little Crissy (Lauren Huilsey) who stuffs candy into her mouth as if she only feeds on payday; she continues the Waters tradition of at least one addictive character in every movie.

Pecker is the most normal member of the family, I'd say. His girlfriend Shelley (Christina Ricci) runs a laundromat, is an expert on stains, and sometimes slightly unzips the top of her jumper so Pecker can snap off a few quick shots. His best friend, Matt (Brendan Sexton III) is a compulsive shoplifter who poses while committing crimes and suffers the most from Pecker's fame; he complains, “If I can't shoplift, I don't want to be an artist!” Waters follows these characters through their 15 minutes of fame without ever churning up very much interest in them. One problem is that Furlong's performance doesn't project much heat or charisma, while the girlfriend played by Ricci seems constantly to be dampening her own. A simple casting switch, making Ricci the photographer and Furlong the boyfriend, might have improved the movie considerably.

There's also a certain tension between the gentler new Waters and his anarchic past. In the scenes in the male strip bar, for example, we keep waiting for Waters to break loose and shock us, and he never does, except with a few awkward language choices. The miraculous statue of Mary could have provided comic possibilities, but doesn't. In the early scenes it's clear that the grandmother is a ventriloquist, but in the later scenes, when the statue actually does talk, the best it can come up with are some disconnected phrases; one is reminded of HAL 9000 as the memory is being disconnected. Better if Mary had become an art critic.

Some scenes are so flat we squint a little at the screen, trying to see why anyone thought they might be funny. After Shelley the girlfriend thinks she sees Pecker kissing the art dealer, for example, she flees broken-hearted into a voting booth, and Pecker follows her into the booth, where they have loud and active sex. This is supposed to shock the bourgeoisie, but it plays like a bad idea.

The movie is filled with cameos, of which the most suggestive is the artist/photographer Cindy Sherman. She eyes the pit-beef grandma as a possible subject and started me thinking maybe that would have been a better approach: Every member of the family is taken up by a different artist, and the Virgin Mary examines the results and says she doesn't know much about art, but she knows what she likes. After all, she's been in a lot of good paintings herself. 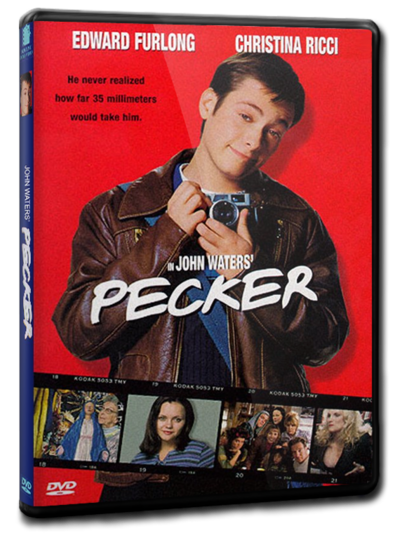