Following a few static shots to convey the rustic beauty of its farmland setting, Spanish director Carla Simón opens her delicate second feature, “Alcarràs” with a moment that later on will read like a premonition of the beginning of the end for her characters’ way of life.

Iris (Ainet Jounou), the youngest daughter in a family of peach farmers in the town that gives the film its name, plays with her twin cousins inside a discarded car—their favorite place to have imaginative adventures. However, the spell of their fantasies is broken when an excavator's bucket claw appears to remove the vehicle from a field. Both visually and in relevance, the image resembles the instance in Jenga when a player withdraws a piece that sets the structure off balance. Likewise, their enviable world is about to crumble.

In the kitchen of the clan’s home, the stubborn patriarch, Quimet (Jordi Pujol Dolcet), and his tranquil elderly father, Rogelio (Josep Abad), argue. The soil they’ve worked on since after the Spanish Civil War doesn’t belong to them but to the Pinyols, wealthy landowners who had given their word never to take it away from them. But without a contract, the Pinyol son has decided to retract that promise and install profitable solar panels.

Quimet’s sole option to remain on the land is to stop farming and take a job maintaining the new technology. It’s a tale as old as time, of how the vertiginous walk of modernity and ambition crush ancient loolivelihoods. Last year’s Maltese standout, “Luzzu,” offered a similar look at the woes of generations of fishermen in that Mediterranean nation.

Amid tableaus of sundrenched landscapes, Simón’s instinct for eliciting naturalistic performances—displayed in her feature debut “Summer 1993"—marries a remarkably stealth narrative structure that lets us into the lives of these people, collectively and individually. With every cut, new information about one of the members of this zealous household emerges in a fluid rotation. Certain sequences in the second half of this slice-of-life drama drag, but they ultimately find their course to a satisfying resolution.

For her first directorial outing, Simón took on the risk of having a child protagonist without previous acting experience. She expands on that in “Alcarràs,” obtaining lived-in depictions of everyday behavior and interactions from an entire cast of first-time actors who, almost shockingly considering their rapport, are unrelated. As with “Summer 1993,” the gamble pays off in great dividends, with Pujol Dolcet and Abad deserving the most praise.

As for the younger generation, the interest in the labor-intensive business varies. Roger (Albert Bosch), Quimet’s teenage son, feels pride in the fruits of his manual labor, so much so that his father begrudges his disinterest in school. His sister, on the other hand, Mariona (Xènia Roset), prefers to dance to modern tunes with friends. She resents the macho dynamics that both Quimet and Roger display to assert control over the family’s women.

In turn, Quimet’s unraveling transforms him from an inflexible and demanding self-anointed martyr incapable of asking for help into a man who grasps the importance of community, not only within his immediate loved ones but with other farmers also struggling financially. A hundred voices ring louder than a lone one.

Grandpa Rogelio tries to appeal to honor, to the bond he believed unbreakable between the landlords’ ancestors and him. But the world today no longer operates with the loyalty he remembers. Though he won’t verbalize it, we witness an unspoken surrender to the greedy forces he can’t control. So Rogelio sings more often than he speaks, and via his tunes of friendship and love of the land, those treasured principles reach young Iris.

Those multigenerational legacies matter most in “Alcarràs.” While the obvious one relates to harvesting peaches for a living, it’s in the intangible sense of unity and cooperation passed on that there’s real value. Simón reaffirms this through an impromptu show the children put on for the adults that ends in a solemn celebration of Rogelio, or in the multistep process of canning fruit where every single person in the house plays a part.

Halfway through their final summer cultivating, a weekend gathering sees Quimet and his sisters cheerfully roughhousing in the pool while his children and nephews look on. The parallels between the two generations appear to please Grandpa Rogelio, whose worry about what may come subsides because of this living asset the Pinyols can’t take from him. The family he nurtured for so long will hopefully plant its roots elsewhere. Simón’s “Alcarràs,” a subtly heartsore portrait of shared crisis, at least assures us as much. 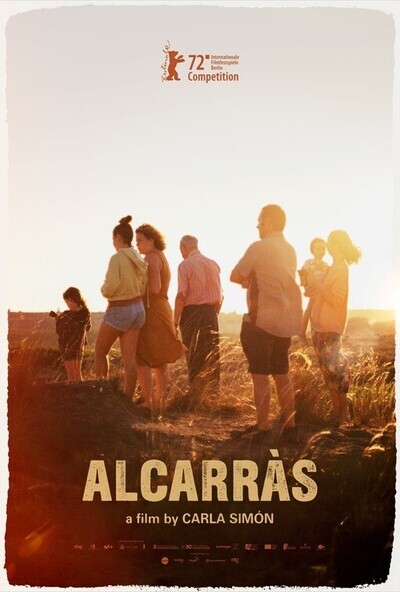