"Luzzu" is about the slow whittling away of ancient rituals and traditions, of bureaucracy imposing itself on something that has existed for centuries. "Luzzu," named for the traditional boats of Maltese fishermen, rests in the uneasy space between tradition and modernity, where the "old ways" are not only de-valued but criminalized, wiping out the past, leaving people facing an uncertain future. "Luzzu" doesn't so much ask questions as present the problem, and it does so in quasi-documentary style, erasing the distance between the subject matter and the audience. "Luzzu" is not homework or a lecture. "Luzzu" is embedded in a quickly-vanishing world, and director Alex Camilleri approaches it with sensitivity, knowing that authenticity is crucial to how the film operates. Camilleri is clearly influenced by Italian neo-realism and contemporaries of that tradition like the Dardennes and Ramin Bahrani (one of the producers of "Luzzu"). "Luzzu" is a moving portrait of a world in flux, and one man attempting to survive the changes thrust upon him by a baffling outside world.

Jesmark (Jesmark Scicluna) goes out every day on his brightly-colored luzzu, inherited from his father, who, in turn, inherited it from his father. Jesmark fishes all day and into the night, working to bring home a full haul to sell at the local fish auction. EU regulations have placed limitations on this old tradition. Catching certain fish during "closed season" is illegal, and boats are checked at random by officious authorities, an outrage to these men who have been fishing since time immemorial. Jesmark and his wife Denise (Michela Farrugia) just had a baby, and the baby requires special care. They don't have the money. A pall of worry settles over the marriage, pushing the couple apart. Out of desperation, Jesmark is drawn into the criminal underworld of the corrupt fish industry. His luzzu sprung a leak and requires a full overhaul, which also costs money. He splits his time between working on the luzzu and his sketchy new side gig.

The luzzus float in and out of the harbor, flashing with colors and personal touches, painted yellow, green, blue, with bulging wooden eyes attached to the prows, eyes peering out at a world that doesn't make sense anymore. Across the harbor looms a gigantic container port, the modern world forcing the fish out of the harbor. Jesmark looks around at the only life he's ever known and sees it slipping away. On the interior of the boat is a yellow-painted baby's footprint, his own. What can he pass on to his own son? The government offers buyouts to the fishermen. But what would Jesmark do instead? Fishing is all he knows.

Camilleri, a first-time director, embeds himself in this world. Working closely with cinematographer Léo Lefèvre, "Luzzu" captures the rituals, the everyday tasks in this line of work: catching fish, packing them in ice for the ride back, cleaning fish, mending nets, hauling a forbidden swordfish on board before throwing it back. Nothing is explained. You understand what is happening by watching. The sun, the sound of the waves, the traffic on the roads in the background, all come across with palpable reality. Camilleri is American, but his family immigrated from Malta when he was a child. He grew up in snowy Minnesota, a long way away from that salty breeze. He looks at Malta with the eyes of an exile, and exiles' perception of their homeland is often sharp, pointed. Most of all, Camilleri approached Malta with curiosity. Frustrated with the lack of an independent Maltese film culture, and frustrated that Malta is often used as a stand-in for other places in bigger films, Camilleri decided to travel to Malta and investigate what story he might tell. He became fascinated by the fishermen.

The cast is made up of non-actors. He cast real fishermen as the fishermen, including Jesmark Scicluna.  Everyone in the film actually lives in this world. David Scicluna plays Jesmark's friend, trying to abide by the rules, trying to help Jesmark. (In real life, the two men are cousins.) Camilleri worked with them both, having them improvise scenes, allowing them to just do what they would do in those specific circumstances. They are both riveting. When they fight there's real pain behind it. The chaotic fish auction is the Real Thing, and there's nothing like the real thing. Chloé Zhao used a similar approach in both "Songs My Brothers Taught Me" and "The Rider," and—to a lesser degree—"Nomadland." Brady Jandreau, the central figure in "The Rider," was so unselfconsciously himself in front of the camera it put some professional actors to shame. The same is true with Scicluna, a handsome man, but burdened, his shoulders tense with worry, filled with tender love for his son (watch how he looks at the baby), but frightened for him, for himself. Jesmark's slip-side into criminality is that much more painful, because his love for the luzzu, his family, and the harbor is so apparent.

Authenticity can't be faked. This seems like an oversimplified or too-obvious statement, perhaps, but a film like "Luzzu" shows the truth of it. 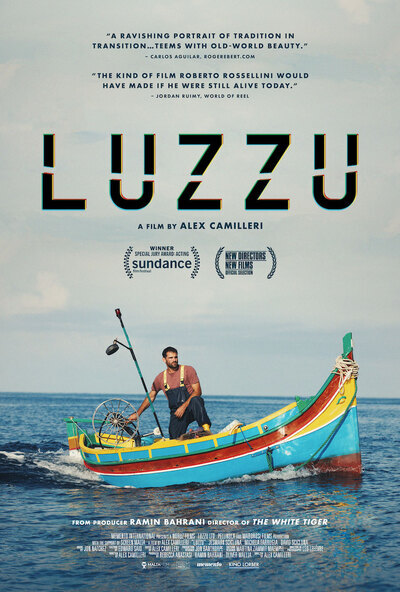