The teen musical "A Week Away," about a juvenile delinquent who finds faith, friendship, and love during a one-week stint at a Christian youth camp, is Netflix's bid to grab a piece of the so-called "Christian film market," one of the few genres of feature to have experienced growth in the last couple of decades. That "so-called" in the preceding sentence isn't a swipe at the sincerity of anyone's religious beliefs—I'm sure that everyone involved with this project is either devout or respectful of those who are—but a debate prompt, aimed at anybody who cares about faith, cinema, or both.

The story begins with orphaned teen Will Hawkins (Kevin Quinn, who looks like he could be Zac Efron's nephew) fleeing a police officer on foot, guitar in hand. We later learn that he's a delinquent minor with a long rap sheet that includes such funny-rebellious offenses as stealing a cop car and putting his high school up for sale on Craigslist. (There were offers.) Will is given a one-week stint at a Christian youth summer camp in lieu of criminal charges, which is how you know that the hypothetical audience for this movie is middle-class, suburban, and white. Will was arrested without bodily harm, but a Black kid from anywhere in the United States who stole a cop car likely wouldn't be, and it's hard to imagine that The System would go out of its way to find reasons not to prosecute him. The film tries to inoculate itself against charges of racial cluelessness by placing Will in the care of a Black foster mother (Sherri Shepherd's Kristin) who works at the aforementioned camp and has an earnest, nerdy teenaged son named George (Jahbril Cook).

Will bunks with George at Camp Aweegaway (a week away, get it?), and each falls for a delightful girl and woos her when they aren't trying to win assorted competitions. Will is smitten with Avery (Bailee Madison), the adorable daughter of the camp's director (David Koechner, the perfect actor for a role like this; he looks like half the beer-bellied, motivational cliche-shouting high school gym coaches in America). George makes a play for Avery's cute but socially awkward pal (Kat Conner Sterling), and slowly overcomes his poor-self image with the support of the much cooler Will. There's a fun, short fantasy musical number, reminiscent of a Super Bowl halftime show or a grand finale musical number on "American Idol," set right after Will does a "makeover" on him, and a few other moderately engaging numbers set on arrival day, in the camp's cafeteria, and in and around the swimming hole. There's almost nothing in the way of dramatic stakes, though, save for a very brief third-act interlude where Will faces the consequences of lying to Avery about his criminal past. This, of course, is a false sort of "conflict" because we know Avery would never cut the handsome, considerate, sensitive Will loose over such a minor transgression. The "villain" in the movie, a lanky redhead played by Iain Tucker, isn't all that threatening or menacing. His main sins are competitive pride, jealousy, and an overweening smugness.

As written by Alan Powell and Kali Bailey (with a story by Powell, Bailey, and Gabriel Vasquez), and directed by veteran music video director Roman White (who has multiple credits with Carrie Underwood, Kelly Clarkson, and Taylor Swift), "A Week Away" feels like an evangelical Christianity-infused Disney Channel movie, if that's not a redundant phrase: there's always been a fair bit of crossover between the cable outlet's cute but bland teen (actually preteen-targeted) sitcoms and musicals, and the American "if it's not rated G, it's not Christian" entertainment marketplace. The film excels at fast-paced verbal comedy, expertly channeling that post-1970s screwball comedy thing where the actors talk around and over each other while delivering exposition, even carrying on sardonic side discussions while another character is engrossed in their monologue. Powell and Bailey squeeze in a few self-mocking or nearly satirical exchanges that poke fun at evangelical Christian youth organization cliches, like how teens who've been on missions lord that over teens who haven't.

In comparison, the musical numbers are merely adequate. Like all but a handful of the numbers in Disney Channel musicals and broadcast network series like "Glee" and "Smash," they have no discernible personality. It's more tedious "coverage" filmmaking: shooting everything with multiple cameras, some of them moving dynamically, and cutting between the various angles with occasional speed-shifts until the performance is done.

This isn't an unwatchable movie, just an underachieving and forgettable one, and somehow that's more irritating than a disastrous swing for the fences would've been. Innocuous and nearly conflict-free films like this are not, in fact, more Christian than a theology and/or morality-infused feature like "The Tree of Life," "A Hidden Life," "The Last Temptation of Christ," "The Passion of the Christ," "Bad Lieutenant," "Silence," "Resurrection," "Diary of a Country Priest," "Jungle Fever" or "The Apostle," to name but a few landmarks; they're just more slick, orderly, and safe. They're long ads reassuring people that the product they already own is perfect in every way.

Judging from the obedient, well-adjusted, sexually neutered, almost rebellion-free teens in "A Week Away," the brand loyalists are musical theater-loving middle schoolers from devout households who can sing every number in "Godspell" and "Jesus Christ Superstar" and maybe "High School Musical" or "Camp Rock" from memory, but haven't been allowed to watch "Cabaret" or "The Book of Mormon" or even "Oklahoma!" yet because their parents are worried it would spark discussions they don't want to have. (Oddly, Netflix has already proved that it can produce smart, quirky, real world-adjacent teen pix with bite, like "The Half of It" and "Moxie.") That the screenplay keeps name-checking the teen dramas of John Hughes only highlights the comparative lack of nerve on display here.

The movie's lack of ambition is a shame, because the youth drama and/or musical and/or romantic comedy is fertile ground for faith-centered narratives that treat struggles over faith, doubt, suffering, unfairness, and willingness to trust authority with the seriousness they deserve. Imagine a Christian youth version of a movie like "The Young Girls of Rochefort" or "La Bamba" or "8 Mile" or "Purple Rain" (which is pretty close to being a Christian youth movie anyway, though not one pastors would show in Sunday school). Or, for that matter, a Christian youth musical modeled on a movie with art in its eyes and poetry in its soul, like "Rebel Without a Cause," "The Outsiders," or "The Spectacular Now." Do we need divine intervention to make this happen? Keep cinema in your prayers tonight. 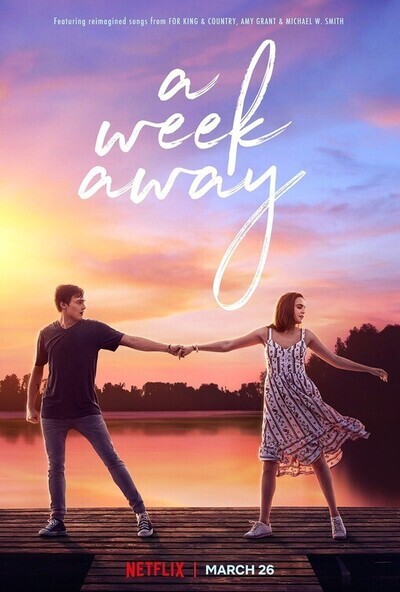 Kevin G. Quinn as Will Hawkins