The Half of It

The pieces may seem familiar in “The Half of It,” but the way Alice Wu assembles them results in a fresh and inspired whole.

The writer/director’s queer take on “Cyrano de Bergerac” features several of the kinds of characters we so often see in Young Adult films and novels: hyper-verbal teenagers given to expressing their anxieties and longings through witty, self-aware narration. It takes place in the sort of small town that may seem quaint to the outside viewer but feels like a prison to the restless kids trapped within it. And the fundamental premise—that teens on disparate rungs of the high-school social hierarchy can forge secret yet life-changing bonds—is perennial.

But by telling a personal tale inspired by elements of her own young life, Wu achieves both singularity and universality. And it helps a great deal that the actress functioning as her stand-in has such a smart and compelling screen presence. Leah Lewis stars as Ellie Chu, a studious and shy Chinese-American immigrant who’s the only Asian kid in fictional Squahamish, Washington. Ellie may seem innocent but she’s savvy enough to have developed a booming business writing essays for cash; this also allows her to help support the cramped apartment she shares with her widower dad (Collin Chou), an engineer who spends quiet evenings watching classic movies like “Casablanca” to improve his English.

Into this vivid setting, Wu introduces two characters who will force Ellie to emerge from her lonely shell. Paul Munsky (Daniel Diemer) is the sweetly oafish tight end on the high school’s terrible football team. He asks Ellie to help him write a love letter to Aster Flores (Alexxis Lemire, no relation to … well, me), a beautiful newcomer who’s reluctantly found herself ensconced in the popular clique. While Paul is drawn to Aster for her looks, Ellie’s attraction runs deeper as she recognizes something more substantive within her. What was supposed to have been just one letter eventually leads to a back-and-forth on text message, with Ellie-in-disguise exchanging book and film references and philosophical musings that Paul could never muster. There’s an infectious energy to this clever correspondence, which ironically allows Ellie to express who she really is, maybe for the first time. Similarly, Aster gets comfortable enough to share that she feels like a bit of a misfit herself. Lemire has such a lovely presence, she makes you wish that her character were fleshed out a bit more; Aster ends up feeling like an idealized figure for both Ellie and Paul to swoon over in their own ways, but perhaps that’s the point.

The more meaty and moving relationship actually occurs between Ellie and Paul themselves. He initially comes off as a doofus but he’s genuine, loyal and has a heart of gold, and he unexpectedly becomes the first real friend Ellie’s ever had. Diemer brings a puppy-doggish authenticity and likability to the role that are quite charming. Conversely, Ellie inspires Paul to dig within himself and learn how to make more meaningful connections than he’s grown accustomed to with his idiot football buddies—their practice conversations over table tennis serve as a sweet training montage—and in the process, she learns to open up and trust people.

“The Half of It” drags a bit in the middle, just as the tension should be mounting as to whether the characters’ true identities and motives will be exposed. There’s a languid quality to some of the pacing that perhaps fits with the sleepy, Pacific Northwest setting but weakens the film from an overall narrative perspective. There’s also an underdeveloped subplot involving Aster and the pretty boy she’s kinda-sorta dating (Wolfgang Novogratz, who also appeared in Netflix’s other high-school Cyrano story, 2018’s “Sierra Burgess Is a Loser”).

But through it all, Wu achieves a welcome generosity toward her characters with her thoughtful handling of race, language, sexual orientation and religion (Ellie’s an atheist; Aster’s the preacher’s daughter). These are teenagers striving to be respectful of their families’ traditions and expectations while also forging paths that satisfy their own dreams and drives. 16 years after her writing/directing debut, the lesbian romance “Saving Face,” Wu follows it up with a film that’s once again open-minded and big-hearted. 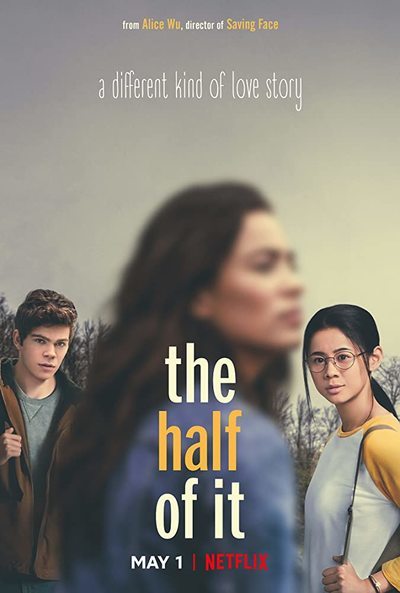