Terrence Malick’s “A Hidden Life,” the true story of a World War II conscientious objector, is one of his finest films, and one of his most demanding. It clocks in at nearly three hours, moves in a measured way (you could call the pacing “a stroll"), and requires a level of concentration and openness to philosophical conundrums and random moments that most modern films don’t even bother asking for. It also feels like as much of a career summation as Martin Scorsese’s “The Irishman,” combining stylistic elements from across Malick’s nearly 50-year filmography, somehow channeling both the ghastly humor and rooted in actual scenes (with beginnings and endings) that longtime fans remember from his early classics “Badlands” and “Days of Heaven,” and the whirling, fast-cut, montages-with-voiceover style that he embraced in the latter part of his career. It’s one of the year’s best and most distinctive movies, though sure to be divisive, even alienating for some viewers, in the manner of nearly all Malick’s films to one degree or another.

August Diehl stars as Franz Jägerstätter, a modest, real-life hero of a type rarely celebrated on film. He wasn’t a politician, a revolutionary firebrand, or even a particularly extroverted or even verbose man. He just had a set of beliefs and stuck with them to the bitter end. Living a life that oddly echoed Herman Mellville’s short story “Bartleby, the Scrivener,” this was a soft-spoken Catholic who refused to serve in the German army, swear a loyalty oath to Hitler, or respond in kind when people said “Heil Hitler” to him on the road. As a result, he suffered an escalating series of consequences that were meant to break him but hardened his resolve.

There was only one way that this story could end, as fascist dictatorships don’t take kindly to citizens refusing to do as they’re told. Franz Jägerstätter was inspired by Franz Reinisch, a Catholic priest who was executed for refusing to swear allegiance to Hitler, and decided he was willing to go out the same way if it came to that. It came to that.

The film begins in 1939, with a newsreel montage establishing Hitler’s consolidation of power. Franz lives in the small German Alpine village of St. Radegund with his wife Franziska, nicknamed “Fani” (Valerie Pancher), and their younger daughters, eking out a meager living cutting fields, baling hay, and raising livestock. Franz is drafted into the German army but doesn’t see combat. When he’s called up again—in 1943, at which point he and his wife have children, and Germany has conquered several countries, killed millions, and begun to undertake a campaign of genocide that the German people were either keenly or dimly aware of—Franz decides his conscience won’t permit him to serve in combat. He objects to war generally, but this one in particular.

It’s not an easy decision to make, and Malick’s film gives us a piercing sense of what it costs him. The effect on Franz's marriage is complex: apparently he was an apolitical person until he met Fani, and became principled and staunch after marrying her. Now she’s in the agonizing position of suggesting that Franz not put into action the same values he’s proud of having absorbed from her, and that she’s proud of having taught him by way of example. If Franz sticks to his guns, so to speak, he’ll end up in jail, tortured, maybe dead, depriving her of a husband, their children of a father, and the household of income, and subjecting the remains of their family to public scorn by villagers who worship Hitler like a God, and treat anyone who refuses to idolize him as a heretic that deserves jail or death.

The situation is one that a lesser film would milk for easy feelings of moral superiority—it’s a nice farmer vs. the Nazis, after all, and who doesn’t want to fantasize that they would have been this brave in the same predicament?—but “A Hidden Life” isn’t interested in push-button morality. Instead, in the manner of a theologian or philosophy professor, it uses its story as a springboard for questions meant to spark introspection in viewers. Such as: Is it morally acceptable to allow one’s spouse and children to suffer by sticking to one’s beliefs? Is that what’s really best for the family, for society, for the self? Is it even possible to be totally consistent while carrying out noble, defiant acts? Is it a sin to act in self-preservation? Which self-preserving acts are acceptable, and which are defined as cowardice?

We see other people trying to talk Franz into giving up, and there's often a hint that his willingness to suffer makes them feel guilt about their preference for comfort. When Franz discusses his situation early in the story with the local priest, he’s not-too-subtly warned that it’s a bad idea to oppose the state, and that most religious leaders support Hitler; the priest seems genuinely concerned about Franz and his family, but there's also a hint of self-excoriation in his troubled face. A long, provocative scene towards the middle of the movie—by which point Franz is in military jail, regularly being humiliated and abused by guards trying to break him—a lawyer asks Franz if it really matters that he’s not carrying a rifle and wearing a uniform when he still has to shine German soldiers’ shoes and fill up their sandbags. Everywhere Franz turns, he encounters people who agree with him and say they are rooting for him but can’t or won’t take the additional step of publicly refusing to yield to the the Nazi tide.

The film’s generosity of spirit is so great that it even allows some of the Nazis to experience moments of doubt, even though they’re never translated into positive action—as when a judge (the late, great Bruno Ganz, in one of his final roles) invites Franz into his office, questions him about his decisions, and thinks hard about them, with a disturbed expression. After Franz gets up from his chair and leaves the room, the judge takes his seat and looks at his hands on his knees, as if trying to imagine being Franz.

That, of course, is the experience of “A Hidden Life,” a film that puts us deep inside of a situation and examines it in human terms, rather than treating it a set of easy prompts for feeling morally superior to some of the vilest people in history. What’s important here is not just what happened, but what the hero and his loved ones were feeling while it happened, and the questions they were thinking and arguing about as time marched on.

What makes this story an epic, beyond the fact of its running time, is the extraordinary attention that the writer-director and his cast and crew pay to the mundane context surrounding the hero’s choices. As is always the case in Malick’s work, “A Hidden Life” notes the physical details of existence, whether it’s the rhythmic movements of scythes cutting grass in a field, the shadows left on walls by sunlight passing through trees, or the way a young sleeping child’s legs and feet dangle as her father carries her. In a manner reminiscent of “Days of Heaven,” a great film about labor, Malick repeatedly returns to the ritualized action of work—behind bars or in the village—letting simple tasks play out in longer takes without music (and sometimes without cuts), and giving us a sense of how personal political struggles are integrated into the ordinariness of life.

There are countless fleeting moments that are heartbreaking because they’re so recognizable, and in some cases so odd yet mysteriously and undeniably real, such as the scene where Franz, in military custody, stops at a cafe with two captors and, on his way out, straightens an umbrella propped against the doorway. Moments later, there’s a shot from Franz’s point-of-view in the backseat of a car, the open window framing one of his escorts doing a weird little dance on the sidewalk—something he probably does all the time whether he’s wearing a Nazi uniform or plainclothes.

Franz Rogowski, the star of "Transit," has a small, wrenching role as Waldlan, a fellow soldier who also becomes a conscientious objector. With an economy that’s dazzling, Rogowski and Malick establish the profound gentleness of this man, with his sad, dark eyes and soft voice, and an imagination that leads him to monologue on red and and white wine, and pose two straw men meant for bayonet practice as if they were Malickian lovers necking in a field. Every minute brings a new revelation, nearly always snuck into a scene sideways or through a back door, its full power registering in hindsight. Not a day has passed since first seeing this film that I haven't thought about the moment when a prisoner who's about to be executed turns to a man standing next to him, indicates the clipboard, paper and pen that he's been given for last words, and asks, "What do I write?"

The film also shows regular citizens identifying with government bullies, and getting a thrill from inflicting terror and pain on helpless targets. The closest Malick, a New Testament sort of storyteller, comes to outright condemnation is when “A Hidden Life” shows German soldiers (often appallingly young) getting up in Franz’s face, insulting and belittling or physically abusing him with a sneering gusto that only appears when a bully knows that his target can’t fight back. (“Schindler’s List” was also astute about this.) There's an unexpectedly elating quality to the red-faced impotence of Nazis screaming at Franz while he's bound up at gunpoint, cursing him and insisting that his protests mean nothing. If they mean nothing, why are these men screaming?

The phenomenon of ordinary citizens investing their pride, their sense of self-worth, and (in the case of men) their fantasy of machismo in the person of a single government figure is one that many nations, including the United States, understand well. Malick doesn’t give interviews, but I don’t think we’d need one to understand why he would release a film like this in 2019, at a time when the United States is being torn apart over the issue of obedient support of an authority figure, and have the dialogue alternate German with English. But the film is rich and sturdy enough to transcend the contemporary one-to-one comparisons that it is sure to invite—and it’s not as if we haven’t seen this scenario elsewhere, before and after World War II, or will never see it again. The social dynamics presented here are timeless.

And yet, improbably, “A Hidden Life” is a tragic story that doesn’t play solely as a tragedy. The misery endured by Franz, Fani and their children is presented as a more extreme version of the pain everyone suffers as the byproduct of life on earth. The rumbling buzz of bombers passing over the village are of a piece with the arrival of the American warships in Malick's "The Thin Red Line" to take Pvt. Witt away from his pacifist paradise and into the war zone, and the English galleons signaling the impending colonization of Powhatan lands in "The New World," and the shots of cops and Pinkertons creeping up on the fugitive heroes of "Badlands" and "Days of Heaven" just when they were able to lose themselves in personal paradise.

Did God create suffering, and evil? If so, why? And why do suffering and evil inflict themselves arbitrarily and unequally? Is the test of endurance and faith the point of injustice and pain? If so, is that point a defensible one? Why be moral at all if morality can be neutered by force, and the powerful are inoculated against consequences that sting rest of us?

Malick offers no answers. As Fani tells us near the end of the tale, all questions will be answered in time. 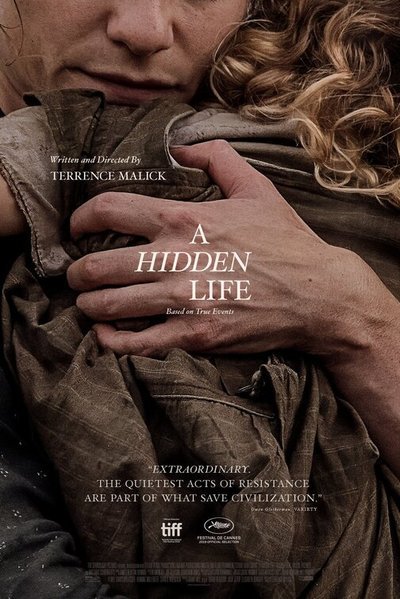