A Bread Factory, Part Two: Walk with Me a While

[Editor's Note: This is a review of Part Two of "A Bread Factory," a matched set of films about an arts center's effect on a small town in upstate New York, written and directed by Patrick Wang ("In the Family"). Although each part stands alone and can be enjoyed separately, they are meant to be seen together. For a review of Part One, click here.]

Part Two of of "A Bread Factory," a soft-spoken epic about a small town art center's struggle to survive, is as meticulously constructed as Part One, but more playful and light on its feet. Part One alternated conversations and confrontations with snippets of art presented by the Bread Factory as well as a rival facility across town. For the most part, the line separating "real" from "not real" was pretty carefully marked. That's not the case here in Part Two, which is subtitled "Walk With Me a While." It straightforwardly continues the story of Part One in some scenes while breaking out into wild, sometimes charmingly goofy flights of fancy in others. It veers between ensemble comedy, domestic drama, musical, and filmed play so boldly that it often feels like an anthology of short films, held together more by theme than story.

Part Two jumps off from a scene in Part One where a visiting movie star named Trooper James (Chris Conroy), a hunk actor in Brad Pitt/Matthew McConaughey mode, flirts with a local woman in a restaurant. He spills something on his shirt, then casually removes it and wryly looks into the camera at the end of the scene just as patrons turn away and pretend they weren't ogling him. It's a Ferris Bueller- or Bugs Bunny-like gesture of cheekiness in a film that otherwise lets us feel as if we're a fly on the wall, watching people who don't know we're there. In that spirit, Part Two gives us more play-within-a-play scenes where we watch people act in theatrical productions. It has musical numbers staged in the spirit of an "everyday" movie musical—the kind where ordinary people burst into song and dance in real locations. And it has scenes where people behave as if they're in a stage play or a movie musical even though they're out in the world, in "reality."

The setting, once again, is Checkford, New York. The town has two arts centers. One is a forty-year old facility built in a converted bread factory and run by a veteran married couple (Tyne Daly and Elisabeth Henry). The other is a newer place across town that's better-funded and more connected with much slicker, shallower art; it's run by a couple of hipster performance artists who go by the team name of May Ray (Janet Hsieh and George Young) and their administrator Karl (Trevor St. John). The narrative picks up where Part One left off, with the Bread Factory having narrowly avoided closure after the school board flirted with taking away their education subsidy grant and giving it to May Ray. As it turns out, our intrepid gang of artists, actors, educators, and loyal patrons isn't out of the woods quite yet. There are more scenes depicting the center's continued fight to survive and stay relevant, as well as a continuation of a subplot about the local newspaper editor, Jan (Glynnis O'Connor), suddenly disappearing, leaving her paper to a talented young intern, Max (Zachary Sale) who's in violent rebellion against his self-involved and unfaithful father (James Marsters).

The most surprising and challenging thing about Part Two is how it takes one of the central ideas from Part One—art's ability help us understand and express ourselves in everyday life—and externalizes it, so that creativity that might otherwise have been confined to the stages of the arts centers erupts into the world outside.

A singing quartet of characters who work for a local real estate agency shows up in the office of Dorothea (Daly), the cofounder and boss of The Bread Factory, and urges in song  to stop fighting, sell a barn on her property that's currently being used for set-building, and travel the world with her partner Greta (Elisabeth Henry), the Isabelle Huppert of Checkford. A busload of tourists disembarks in front of The Bread Factory and wanders around town, taking selfies while being led by a tour guide who regales them with nonsense "facts" ("This is the place/Where God was invented/Where Adam and Eve dated/Each other!") Patron at a local restaurant sit at their tables, talking in groups and texting by themselves, and suddenly one young man starts doing a tap dance routine synced to the movements of his fingers as he types on his phone.

There are other dance numbers in this vein, and they aren't just indulgences. They're plugged into one of the film's organizing ideas: the necessity that artists understand and adapt to a changing world. The tourists recording themselves during a walking tour emphasizes how iPhones and social media enclose us in bubbles of narcissism. Those bubbles separate us from physical reality, as well as from the necessity of knowing learning to talk to a strangers. At the same time, though, social media turns us into bold and confident performers who develop their own aesthetic on a virtual public stage—like the actors appearing in the Bread Factory's production of "Hecuba," getting better the longer they do it.

Even seemingly ordinary scenes of people hanging out feel more theatrical and pointed in this half of the story—more revealing of the ways that art informs life, and how the two bleed into each other so that it's sometimes hard to tell where one picks up and the other leaves off. Sir Walter (Brian May), the old English actor who has starred in many Bread Factory productions, hangs out at the newspaper office, mourning his friend Jan's disappearance and watching Max train a small army of children (all regulars at the Bread Factory) to be journalists (delightful comic scenes, like something out of an early Wes Anderson film). Sir Walter is unexpectedly joined by the local writer Jean-Marc (Philip Kerr), a man Walter hasn't spoken to since he panned one of his performances in 1968. They swap stories that are expressed as lengthy theatrical monologues, and reach an understanding. The camera parks on their faces as they talk and transport us into a mental space. In these scenes, and in scenes set on an actual stage, Wang channels Ingmar Bergman, who kept discovering new worlds in closeups of people talking.

A more traditional approach to public art is expressed in the scenes of "Hecuba" being rehearsed and performed. Teresa (Jessica Pimintel), a waitress at the cafe, musters the nerve to play the daughter of Greta's character even though she's never acted before. (Every citizen of Checkford eventually appears on the stage, we're told.) Wang gives us a nice, long scene of Teresa struggling through a read-through while Dorothea directs her and Greta gives her an acting model to emulate. As in the closing scene of Part One—where a distraught Max reads aloud from "Hecuba," loses his self-consciousness, and starts take comfort in the words—we see Teresa come alive as an actress. She becomes the character by letting the words and her scene partner's performance flow through her.

This is an experience that actors talk about all the time, but you almost never see it enacted right in front of you, in real time. Teresa's transformation into an actress is the true heart of this film, as carefully observed as the training of an athlete in a sports film. It culminates in a daringly long sequence at the end—as long as the school board hearing that ended Part One—where Wang simply lets us watch a wrenching scene from the play being performed by Teresa, Greta and another Bread Factory regular (Jonathan Iglesias). We not only see that Teresa is a real actress, we understand how the fears of the characters in  "Hecuba" mirror the fears of "A Bread Factory" characters (Dorothea especially) that their beloved arts center will be taken away from them. We never see the audience during this sequence, but we can imagine ourselves sitting there in the theater, watching the play while thinking about the future of the Bread Factory and the town, and the value of art as a tool for appreciating life.

Part Two of "A Bread Factory" can be discombobulating if you haven't seen Part One. You have to intuit a lot of the story because it's embedded in (and implied by) the many scenes where people perform. But it can be enjoyed on its own, as a crazy quilt of moments where a filmmaker and his cast just go for it, not getting hung up on whether we're going to be sold on every little thing they do.  And if watch the films together, it seems as thorough and thoughtful a statement on art and life as any filmmaker has made. Part One is life, Part Two is art. There a lot of overlap in each half. And the way they complement each other will make us think about our own lives in relation to the art we love, as well as Wang's movies: mirrors that reflect us by drawing out our fears and dreams. 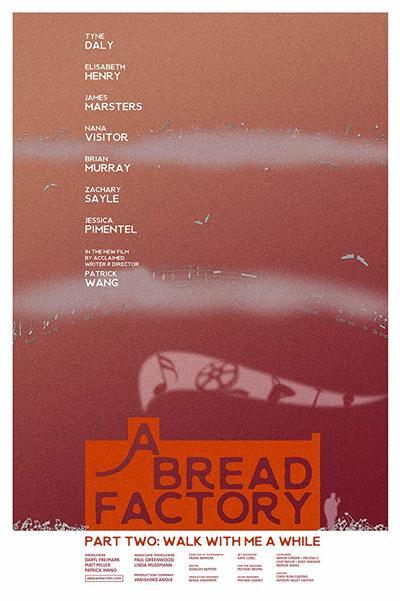