A Bread Factory, Part One

[Editor's Note: This is a review of Part One of "A Bread Factory," a matched set of films about an arts center's effect on a small town in upstate New York, written and directed by Patrick Wang ("In the Family"). Although each part stands alone and can be enjoyed separately, they are meant to be seen together. For a review of Part Two, click here.]

Patrick Wang's "A Bread Factory Part One: For the Sake of Gold" is half of a matched set of movies that comprises the most original filmgoing experience of the year. Part Two is subtitled "Walk with Me a While." Each runs two hours. The halves are meant to be shown back-to-back in a theater with an intermission, but you can watch them independently and come away feeling that you've seen a complete work. Any way you watch it, "A Bread Factory" is a wildly ambitious yet self-effacing epic about a place and its people, written, directed and acted in the spirit of Robert Altman ("Nashville"), Richard Linklater ("Bernie") and Edward Yang ("Yi Yi")—muralists who paint on wide canvases, yet still treat each character as individuals worthy of their own portraits.

Part One introduces the fictional upstate New York town of Checkford, a place as vivid as Grover's Corners, Deadwood or Maycomb. The central location is the eponymous arts center, headquartered in a converted bread factory. For forty years the place has been run by its founders, Dorothea (Tyne Daly) and her partner Greta (Elizabeth Henry). Dorothea is a tough, passionate administrator and stage director who doesn't suffer fools. Greta is a soft-spoken, reflective, Finland-born actress who tries to rein her partner in when she's about to lose her cool.

That's been happening more often recently. A bigger, glitzier arts facility just opened on the other side of Checkford. It serves up flamboyant and shallow work that's steeped in 1990s conceptual art cliches, shuts the brain down instead of engaging it, and seems designed to pull in tourists and send them home with tote bags and t-shirts. Most of the work is produced or approved by a couple of gimmicky, very successful Chinese performance artists known as May Ray (Janet Hsieh and George Young).

May Ray pipe prerecorded laughter and applause through public address systems to override the crowd's responses. They dress in outrageous costumes, including a set of retro spacesuits with tiny action figure versions of themselves dangling in front of their faceplates. They are their own logos, branding all they touch. They like to draw the audience into cutesy stunts (like "walking in another person's shoes," which are fashioned from hats) that momentarily thrill or amuse, then serve up banalities disguised as wisdom (like "stumbling is a part of walking") so that patrons go home knowing not only that they've seen Real Art, but what it was supposed to mean. This is a contrast to The Bread Factory, which books some out of towners and the occasional big name, but is mainly fueled by local work steeped in a classical liberal arts tradition, created by local artists for local audiences in a relationship that's more reciprocal and open-ended, an exchange of traditions and values.

Dorothea and Greta learn that the town is thinking of cutting their educational subsidy— which lets them teach Chatford children and teenagers, thus training a new generations of artists and patrons, and provides the core of their monthly nut—and give it to the newcomers, who overmatch them in every area except parking. Suddenly they have to think like tacticians, brainstorming a plan to convince a majority of the city council to leave things as they are.

The new facility's administrator, Karl (Trevor St. John), is a formidable adversary. He presents himself as a calm, bland, middle manager-type, but he's smart and ruthless. Karl has shady funding connections, and seems to have already bought off half the school board. He even tries to strong-arm Dorothea into backing down from the impending board fight by threatening to report The Bread Factory to the state for hiring a felon (albeit one whose conviction was reversed) and employing children (actually volunteers who are being thoughtfully mentored by the staff).

Dorothea and Greta's strategizing and politicking is intercut with scenes of the couple rehearsing a new production of the Greek tragedy "Hecuba," directed by Dorothea, translated by a scholar named Elsa (Nana Visitor) who shyly declines to call herself a writer, and co-starring Greta and a grand old English actor known as Sir Walter (the late, great Brian Murray, in his last performance). Around this core group, Wang spins a constellation of supporting players. Some have stories that intersect with (and comment upon) the main action. Others get one juicy scene or bit, then recede into the chorus.

The "Hecuba" translator is married to a school union representative named Jason (James Marsters), who's having an affair with a city council member named Mavis (Nan-Lyn Nelson). Her husband Sam (Milton Craig Nealy)  owns the cafe where everyone hangs out, and their daughter Julie (Erica Durham) is a library who's acting in the production. Sitting in the empty auditorium during every performance is Sandra, a woman with an operatic voice (played by opera singer Martina Arroyo). She watches plays being rehearsed, contributes musical knowledge, and tells stories about her late husband, who wrote appliance warranties ("He told me, 'Sandra, more people read me than Faulkner").

The aforementioned journalist, Jan (Glynnis O'Connor), is also the local newspaper's editor and only employee. She keeps the tradition of an independent Fourth Estate alive from a windowless basement office. Jan is currently mentoring a teenage intern named Max (Zachary Style). Max is in love with a local library assistant named Julie (Erica Durham), who's also acting in "Hecuba." The production might or might not get reviewed by a retired Pulitzer-prizewinning critic and scholar named Jean-Marc (Philip Kerr) who panned Sir Walter in 1968. Sir Walter has been giving him the silent treatment ever since.

"A Bread Factory" is about a lot of things. One is the challenge of succeeding as an artist in a market economy when you have knowledge, enthusiasm, and the loyalty of a core audience, but no money or connections to speak of, and a stubborn determination to let the work speak for itself rather than constantly hyping it. The David and Goliath dynamic between the two facilities is reminiscent of the conflict between Italian restaurants in the classic American 1950s period comedy "Big Night." One restaurant is run by a showboat who gives the people what they want: spaghetti and meatballs with red sauce, checkered tablecloths, accordion music, and sudden bursts of flame. The other restaurant specializes in Northern Italian food unfamiliar to 1950s Americans, cooked by an uncompromising chef who wants to give every diner a surprising and authentic experience, and would rather brood in his kitchen than put on a show. You can guess which place makes money.

Beyond that, "A Bread Factory" is an idealistic statement about the importance of art in everyday life. It's about how a scene from a play or a line from a poem can cast a new light on your problems or dreams, maybe even put a new frame around your life, your community, and the culture that shaped you. A big part of Dorothea's frustration—brilliantly communicated by Daly, in a performance that sums up everything that makes her such a treasure—comes from having to explain all this in the first place. She's old enough to remember when Americans of all social classes thought of art as a birthright, as integral to life in an advanced democracy as well-funded public schools.

The artists in this movie are educators as well. They have to be, because they know that if they don't find an exciting or charming way to explain their art to the audience just a little bit, nobody else is going to do it for them—and that art can't survive in an increasingly corporatized existence unless you keep reaching out to younger generations and helping them understand why a life of the mind is important.

This dynamic comes through vividly in the early part of the movie, by way of an embittered indie filmmaker named Jordan (Janeane Garofalo) who is in town screening her latest work at The Bread Factory. She loathes the boring, predictable questions of adults ("What was your budget?"), but roars to life when she's guest-teaching children. One of her pupils is so inspired by Jordan's rant about the importance of passion in art that he goes home and upbraids his mother for not cooking chicken like she means it.

A major subtext in all the scenes that involve Dorothea, Greta, Karl and May Ray is the way a capitalist economy encourages the public to think of creative work as just another product, forcing independent creative artists to package and present themselves like rock-star entrepreneurs, even if they don't have the temperament for it; and how the postwar tradition of publicly funded art and art education in America has withered in the last 30 years, to the point where many people hear the word "art" and think "decadence" or "indulgence" or "a thing that taxes shouldn't fund."

"You must have seen rough times before," a board member tells Dorothea. "Honestly," she says, "I've never seen it worse." Her pessimism is independently echoed by Jean-Marc, who says of the arts facility, "They once baked bread here, but now we live in an age of crumbs. But what they make of these crumbs is miraculous, and we are lucky to have them."

This is my favorite film of the year by far—and when I say "film," singular, I'm referring to both halves of "A Bread Factory," because they flow together in the mind. As of this writing, I've seen both parts three times. With each viewing, I notice new things and am more moved by the characters. They're eccentric in the way that real people are, but written and acted with the economy and directness that distinguishes characters in well-constructed plays or short stories—ones where the storytellers know what they want to say and how they want to say it.

This is a long movie—and there's two more hours waiting for you in Part Two—but if you tune into its wavelength, no part feels unnecessary. The story keeps going even when it seems as if the film is taking a break to show us a piece of someone's art. Notice, for instance, that the poet's reading takes place right after a scene that makes Dorothea worry that the Bread Factory, which has survived four decades, might be doomed. The first poem is about a redwood, an ancient, powerful ever-growing thing. The second is from the point of view of someone whose gondola sunk to the bottom of a Venice canal. Maybe Dorothea, who introduced the poet, is sitting out in there the audience, relating the two poems—one reverent, the other despairing—to that moment in her life.

Readers should know going in that this is not a film (or pair of films) that you can half-watch while looking at your phone. Wang takes his sweet time setting up a moment, and the punchlines in comedic scenes are as likely to be visual as verbal. You have to give yourself over to the story, characters and atmosphere with an open mind and heart, and be at peace with the fact that the movie is going to throw you into the middle of scenes without spelling out who everyone is, and what, exactly, you're looking at. To paraphrase a friend who's a minister as well as a film buff, this is the kind of movie where Mohammed goes to the mountain, not the other way around. The journey is worth it. This film is miraculous. We are lucky to have it.

This review was originally published on October 1, 2018. 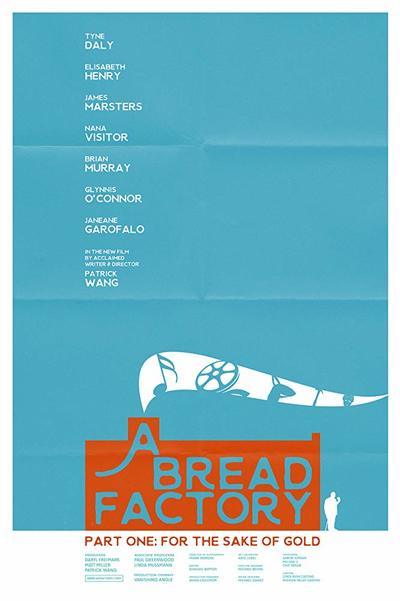