Matthew McConaughey stole Richard Linklater's second feature, "Dazed and Confused," with his performance as the eternal high school stud Wooderson, so it makes a certain sense that he'd steal the documentary "21 Years: Richard Linklater," a feature-length look at the director's movies that's disproportionately focused on "Dazed." Ruminating on the Austin-based writer-director's oeuvre, McConaughey improvises monologues with an infectious grin, and uses his hands like a preacher or motivational speaker. The documentary runs 78 minutes, at least 15 minutes of which concern "Dazed"; the recent Oscar and Emmy winner tucks them into his back pocket like a tin of snuff. If nothing else, McConaughey's goofball autodidact's intensity certifies that there is, in fact, a "Matthew McConaughey" type of character, and that McConaughey originated it.

"Boom! We go to set, I get my '70s Chevelle," the actor says, remembering the film's 1992 production in Austin, Texas. "It's gonna be my first scene in the movie, and I'm going, 'Fuuuuuuck, here we go!', and I'm really nervous, I'm going, 'Who am, I what am I about, what's my man, what's my man, what's my man, what's my man,' and I remember in my head hearing Wooderson's voice going: 'All right, I'm about pot, rock 'n' roll, my car, and p----y.' Well, I'm high, I'm in my Chevelle, I'm listening to Nugent, and I heard 'action.'" Later, in a section describing Linklater's calm, reflective demeanor, McConaughey says he once told the director, "You're so Buddhist you don't even know you're Buddhist."

Directed by Michael Dunaway and Tara Wood, "21 Years" does not cover every Linklater film, just highlights that keep popping up whenever the director's films are discussed. These include "Dazed"; "Slacker"; the experimental animated features "Waking Life" and "A Scanner Darkly"; "School of Rock"; "Bernie" and "The Newton Boys" (in which McConaughey costarred); the remake of "The Bad News Bears"; and the "Before" films. The latter, a collaboration between Linklater and actor-writers Julie Delpy and Ethan Hawke, is described as the lowest grossing trilogy in cinema history. (That might or might not be true, but it's fun to say.) There's nothing about Linklater's secret magnum opus "Boyhood," which was still under wraps during the filming of this documentary and is referred to only as "the 12 year project." Delpy, Hawke, Jack Black, Keanu Reeves, Billy Bob Thornton and other Linklater performers talk about Linklater's film shoots, and try to illustrate his personality and interests; the filmmakers insist on illustrating their anecdotes with animated cutaways that feel redundant and sometimes desperate. (Surely Matthew McConaughey's charisma is enough to hold our attention for a minute or two, without "help"?)

Linklater does not sit for any interviews. He is an absent presence. In one way, this is endearing: it suggests that Linklater either didn't want to seem self-aggrandizing, or didn't want to seem to be guiding anyone else's interpretations, including the viewers'. But in another way, it hurts the film, because the other participants (mostly actors) lavish praise on Linklater without analyzing the technique or themes of his movies in much detail. The most insightful comments about Linklater as an artist, cultural observer, and community organizer come from Austin Chronicle founder Louis Black. He had a cameo in "Slacker" and has known Linklater for years, but seems to have a more detached point-of-view than the actors who've worked with the director at least once, and would presumably like to again.

The 'tribute to an old pal" structure makes "21 Years" feel less like a yeasty stand-alone theatrical feature than a shaggy dog supplement that might be packaged in a set of Linklater DVDs, or screened at a surprise birthday party for the filmmaker. It contains just enough analysis to interest those outside Linklater's personal circle, but not much more. Interviewees wax eloquent about Linklater's fascination with subcultures and what it's like to work with him, paying special attention to his laid-back way of controlling and directing action, and his ability to help actors find the notes he wishes to them strike without being too obvious about it. If you admire Linklater, you'll enjoy this documentary, but an "American Masters" episode would still be preferable. The outtakes that run during the credits—a few of which feature Thornton in absurd-profane mode—are warm and funny. 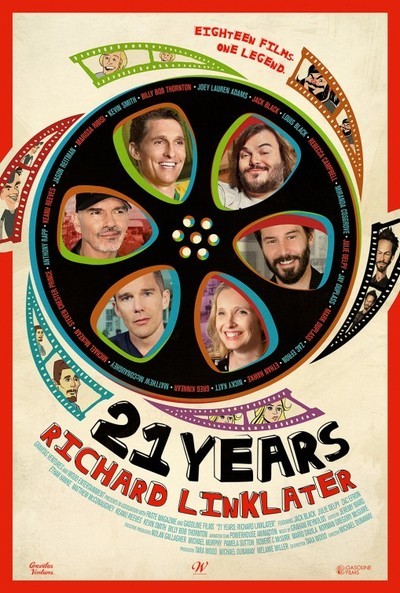