Michael Ritchie's "The Bad News Bears" is intended as a comedy, and there are, to be sure, a lot of laughs in it. But it's something more, something deeper, than what it first appears to be. It's an unblinking, scathing look at competition in American society - and because the competitors in this case are Little Leaguers, the movie has passages that are very disturbing.

The movie's about a team that's surely one of the worst ever assembled (although I once played right field for one that wasn't much better). The kids are uncoordinated and demoralized and afraid of the ball, and wouldn't be playing at all except that a liberal city councilman has made them a test case. The members include a black, a couple of Mexicans, various other minority group members and, eventually, a girl.

The team's obviously so bad no self-respecting coach would have anything to do with them, so the councilman hires a coach, illegally. His choice is an alcoholic onetime minor leaguer played by Walter Matthau - the sort of man mothers warn their children about. He doesn't understand kids, he's a loner, and he mixes bourbon and beer right in the can and drinks it in the dugout. Even the kids see through him.

The movie comes by most of its comedy fairly easily. Matthau is, of course, an engaging performer, and the role's a good one for him as he sits in the dugout, hung-over and bleary-eyed, watching his Bears come out of the first inning 26 runs behind. The kids are good, too; Ritchie sees them in a fairly tough and unsentimental way, and lets them use the sort of dialog we'd like to think 12-year-olds aren't familiar with. Matthau works with the kids, despairs with them, finds himself beginning to care in spite of himself and finally goes out to recruit a ringer. She's Amanda (Tatum O'Neal), the 12-year-old daughter of one of his former girl friends, and over the years he'd developed her into a first-rate pitcher.

All of this is pretty much as we'd expect it, and there are obligatory scenes in which the Bears finally get their uniforms, Matthau finally shaves, the boys say they won't wear their athletic supporters until Amanda wears one, too . . . and the team wins its first game. But beneath this entertaining surface stuff, there's something else going on. We begin to sense how important, how really crucial, Little League is to the adults involved in it. How much emphasis they place on winning. If winning is the only point, how you win starts not to matter. Matthau gets caught up in the competitiveness, too, ordering his kids to deliberately get themselves hit with pitched balls, and telling a new recruit (Jackie Earle Haley, playing a neighborhood juvenile delinquent and natural athlete) to grab as many plays as he can away from his teammates.

Director Michael Ritchie has made a specialty of movies about competition. "Downhill Racer," about Olympic ski champions, was his first film, and he also made "The Candidate," about a political race, and last year's "Smile," about a beauty contest. They're all three very good films - but "The Bad News Bears" is, in a way, his most harrowing portrait of how we'd sometimes rather win than keep our self-respect. He directs scenes for comedy even in the face of his disturbing material and that makes the movie all the more effective; sometimes we laugh, and sometimes we can't, and the movie's working best when we're silent. 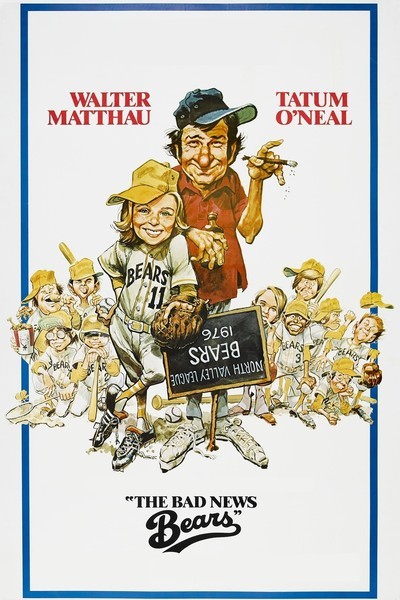