Whatever irritating, immediate outcomes that result in the upcoming post-Oscar whinge, the most lamentable omission from Sunday night’s gala ceremony is arguably that the Academy Awards’ longstanding “Lifetime Achievement Award” recognition has already transpired at a separate event with little fanfare. Audiences will miss out on a deserved, long-time-coming Spike Lee acceptance speech. The annual “Governors Ceremony,” which took place in November, had a big crowd of Academy members honoring the controversial filmmaker of “Do the Right Thing,” “Malcolm X” and “The 25th Hour,” with just weeks to go before the tragically-limited release of his best film in years, “Chi-Raq,” a ferocious satire in rhyme that very well could have gained some of its own warranted awards momentum had the contingencies of its exhibition been different. While #OscarsSoWhite dominated on nomination day, viewers could scrounge YouTube for audio of Lee’s enlivening and hopeful speech from two months before, along with an often hilarious introduction by three of his key performers: Denzel Washington, Samuel L. Jackson, and stealing the show with a prolonged accented anecdote, Wesley Snipes.

On YouTube, as with on the Oscar telecast, what we couldn’t see were Lee’s images. As Spike Lee’s absence from the Academy ceremony has been problematic for years—there was much press in 1990 of presenter Kim Basinger decrying “Do the Right Thing's" absence as a Best Picture nominee (Lee received a nod for his screenplay) or how a powerful epic like “Malcolm X” received merely two nominations in 1993 (for Washington’s starring performance and Costume Design)—how terribly fitting his 15 minutes of recognition should occur when the Lifetime Achievement Award has become a ceremony footnote, linked with the more esoteric scientific and technical awards which receive some curt lip service during the big show? The same moment was able to serve as the concluding send-off for Richard Attenborough’s 1992 bombastic biopic of Charlie Chaplin and several affecting Oscar moments over the years. The images for which a filmmaker like Lee is responsible, as an independent African-American director pulling no punches and laying out conflicts and histories hidden from so many affluent American households, remain incendiary, urgent and powerful. One may not agree with his positions, as either an outspoken social commentator or as a filmmaker, but as a black voice who broke into the mainstream while maintaining idiosyncrasies, he’s a pioneer and anomaly. And that status as anomaly, as #OscarsSoWhite makes clear, has to end.

The Academy of Motion Picture Arts and Sciences is devoted to the “preservation, restoration, exhibition and study of motion pictures.” With every year containing flagrant snubs, surprises, and milquetoast winners that will probably be forgotten sooner than the empty-handed peers, commentators whine about its insignificance and middle-brow attitudes: the Oscars don’t matter. And sure, they don’t. The amped volume of Oscar electioneering, the expensive campaigns that accelerated with Harvey Weinstein’s strategies in the mid-1990s, has all but dismantled serious contemplation of the movies. There are loud prognosticators aping Nate Silver, desperately trying to figure out the science of the Oscar, as hype migrates from Cannes through critics/guild awards to late February’s finale. They’re like alchemists trying to finally crack the code, fishing for minnows while sitting on a whale, as worthwhile mainstream motion pictures are reduced to the accolades for which they qualify, and more eccentric offerings are given a cursory tip of the hat as they’re shuffled away as sustenance for Criterion-buying specialists.

Preservation, restoration, exhibition and study feel a little lost in the noise. What about the films? What about Spike Lee and how “Do the Right Thing” still stings more than ever today, 26 years later? Or for that matter, as the bearer of Lifetime Achievement continues to work in his seventh decade, consider how “Chi-Raq,” filmed only just last summer, distills the sorrow and absurdity of a violent, segregated nation as an audacious alarm bell where documentary and affected satire tremulously rub against each other, and where tears of laughter and sadness almost become indistinguishable. And from previous years, what about other lifetime honorees? This last year Lee was joined with actress Gena Rowlands, while in recent years the Academy has selected Hayao Miyazaki, Jean-Claude Carriere, Steve Martin, Hal Needham, Dick Smith, Jean-Luc Godard, Gordon Willis, Lauren Bacall and Gordon Willis.

That’s a lot of rousing assemblies of footage, and maybe the quantity is an argument for moving Lifetime Achievement to November’s Governors Ball. While Bacall, game changing cinematographer Willis, pioneer B-movie producer Roger Corman, and iconic animator Miyazaki aren’t particularly surprising, before 2009 would the Academy take the time to give Oscars to Eli Wallach, Angela Lansbury, and Steve Martin, cherished though they are? It’s hard to say. Meanwhile, by moving the Lifetime Achievement awards off the big Oscar broadcast, the Academy can say they honored a paradigm shifting iconoclast like Godard while not enduring the awkwardness of his inevitable absence. But Godard’s absence and cavalier attitude regarding the Academy is totally in character, and by God, to be a child introduced to Godard through the medium of splashy American broadcast television, budding minds warped by clips from “Breathless,” “Band of Outsiders,” “Contempt,” “Weekend,” “Hail Mary” and “In Praise of Love”—what a sweet, ironic victory for everyone involved. 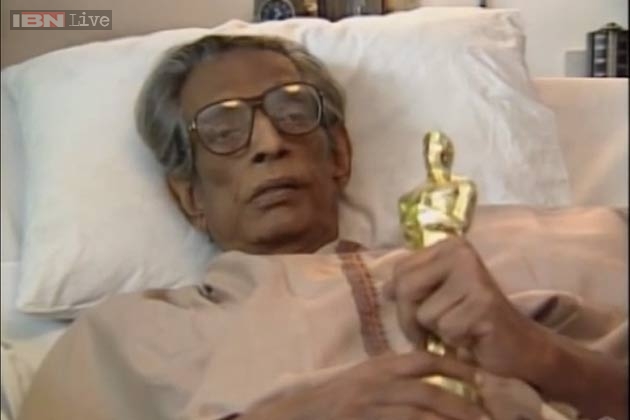 Imagine being an adolescent whose movie preferences don’t extend beyond "Star Wars," Indiana Jones, Tim Burton’s “Batman” and “Bill and Ted’s Excellent Adventure,” and then, suddenly, as happened in March of 1992, witnessing this otherworldly, entrancing moments from “The Apu Trilogy.” Satyajit Ray, accepting the Lifetime Achievement award from what appeared to be his deathbed, did not exist for me before that moment. A year later, I was flung into a circus of bizarre and dreamlike moments from films with titles like “La Dolce Vita,” “8 ½,” “Satyricon,” “Juliet of the Spirits,” “La Strada,” “Roma” and “Intervista.” With that, I was introduced to Federico Fellini (who would also pass away mere months later). In both cases it would be years before I ever got around to watching films by either Ray or Fellini, but seeds were planted and those pictures and sounds settled inside of me, upsetting a pretty basic, bubbled ecosystem. This wasn’t an inception given at a class or in a library, but amidst the glamor and tackiness of an awards show (and indeed, the inception led to pursuing these subjects, and infinite branches extending and related to these subjects, in classes and libraries for countless hours).

Subsequent formative years for me saw Deborah Kerr, Kirk Douglas (boldly accepting while recovering from a recent stroke), Michelangelo Antonioni, Stanley Donen and Andrzej Wadja. In the 21st century, the picks were artists whose work I was now familiar with: Sidney Poitier, Peter O’Toole, Sidney Lumet, Blake Edwards, and then so triumphantly, Robert Altman, the rebel with whom I first became familiar with “The Player” coming to stage he lampooned so memorably in that film to collect on the legacy that included “MASH,” “McCabe and Mrs. Miller,” “The Long Goodbye” and “Nashville.” There was something poignant seeing Altman there, for the first time disclosing a recent heart transplant, still active and ever more influential as an electrifying montage of his films were exhibited for a billion people. 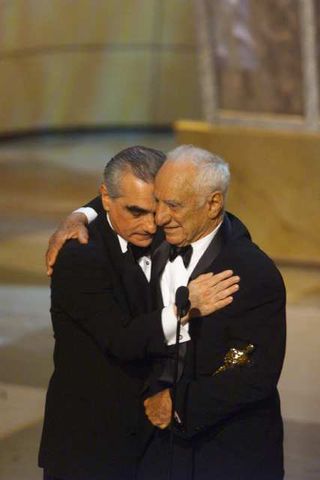 The recognition of Charlie Chaplin (in 1971) is precious because it acted as amelioration for what happened to Chaplin throughout the 1940s and 1950s, as a filmmaker subject to scurrilous Hedda Hopper gossip columns and communist accusations. But few Oscar moments are so troubling and affecting as Elia Kazan’s acceptance in 1999, where a half-century later, in addition to encountering the force of “A Streetcar Named Desire,” “On the Waterfront” and “Baby Doll,” many of us for the first time encountered the palpable toll and of the Hollywood blacklist, privy to how the warranted bitterness endured. Kazan, who infamously named names to HUAC, stumbled on his speech as audience members like Nick Nolte and Amy Magidan sat on their hands. It’s a difficult, even wrenching thing to watch, and yet when Kazan turns around and is embraced by presenter Martin Scorsese, it’s an unlikely note of absolving grace, almost in step with the younger filmmaker’s long-running theme of the Catholic paradox of forgiveness swimming in his work, so influenced by the elder (certainly when we think about the concluding moments and biblical post-script of “Raging Bull”).

That tension with the past, along with the substance of the past and the industry, is muted with the absence of the Lifetime Achievement segment and speeches. The present becomes boxed off from its lineage and the show threatens to become exactly what its detractors say it is: a spectacle of its own self, subject to haranguing tweets and trivial analysis while a blurry rat race of expensive studio campaigns transpires. The Oscars can have more value for film than any other event on broadcast television, and it should fight to preserve its place at this time when cinema is in such a propitiously transitory state. The abundance of choices through on-demand streaming (evidenced by the growing difficulty for a critic to complete a top ten list in recent years) proves that quality moviedom is far from dead, but what’s worrisome is how few of those films are embraced beyond an entrenched and limited cinephile audience. Luminaries of the past can guide us forward, but for their art to affect change we need the work to be visible, even in the briefest of segments and limited of contexts.

Considering one of the more upsetting snubs from this year, Michael B. Jordan in Ryan Coogler’s “Creed,” we can witness first hand the past’s vitality as images (and dead franchises) are appropriated and resurrected by a younger generation. Last year’s ceremony briefly had host Neil Patrick Harris dancing in front of classic movies, tightly circumscribed to the background, while the rest of the show was clear of any past movie montages and played host to a tawdry gabfest. It would be beneficial for the Academy to reconsider how it honors cinema legacies, bringing Lifetime Achievement back to the mid-show forefront and taking a deep breath of retrospective pause and contemplation as it exhales forth. The outcome will be healthier for moving pictures as audiences take sight of fresh worlds, propitiously leading to a more inspired and diverse future.