One need not be proficient in “Rocky” lore to appreciate “Creed,” but for those who have followed the exploits of Sylvester Stallone’s Philadelphia boxer, Ryan Coogler’s latest film pays unexpectedly rich emotional dividends. “Creed” is so reminiscent of the 1976 film that introduced us to Rocky Balboa that I sense newcomers will fall for “Creed”’s characters the way viewers fell for “Rocky”’s 40 years ago. Though 2006’s “Rocky Balboa” was a fitting final chapter for its titular hero, “Creed” finds more of his story to explore. In the process, the film reminds us that, employed by the right director, Sylvester Stallone can be a wonderful actor.

Coogler’s story, co-written with Aaron Covington, unabashedly mirrors the arc of the original “Rocky”. There’s the humble boxer, his mentor and the woman who becomes his significant other and rock of support. There is also the famous boxer who gives our hero the boxing match chance of a lifetime. Armed with these elements, “Creed” then tweaks them, playing on our expectations before occasionally surprising us. It may be easy to predict where the film takes us, but that doesn’t reduce the power and enormity of the emotional responses it gets from the audience. This is a crowd-pleaser that takes its time building its character-driven universe. There are as many quietly effective moments as there are stand-up-and-cheer moments, and they’re all handled with skill and dexterity on both sides of the camera.

Coogler’s direction leaves little doubt that “Creed” is writing a love letter to “Rocky” lore while also establishing an original narrative about its own creation, Adonis Creed (Michael B. Jordan). Coogler perfectly captures his intentions in an early conversation between Rocky and Donnie (as Adonis calls himself). Their talk is framed with Stallone and Jordan standing in front of a picture of Rocky and Adonis’ late father, Apollo Creed. Coogler fits his actors in the shot so that the background image serves as a flashback and a flash-forward; the screen contains Rocky’s past and Apollo’s future. Additionally, Stallone’s run-down physicality as the older version of Rocky stands in striking contrast to the boxer posing behind him, frozen in time. We’re moving forward, but the ghosts of the past are still coming with us.

“Creed” begins with Donnie’s past, where young, orphaned Adonis Johnson is visited in juvenile hall by Apollo Creed’s widow, Mary Anne (a fiercely maternal Phylicia Rashad). Mary Anne adopts the young man, a product of an affair Apollo had before he was killed in the ring by Drago in “Rocky IV”. Though Mary Anne raises him as her own, Donnie’s resentment about being in the shadow of a famous man he never knew nor met grows as he ages. Yet he secretly engages in his father’s sport. “Creed” shows Donnie fighting in Mexico before returning to his office job in Los Angeles 12 hours later.

That Donnie has a white-collar job is interesting. It’s the opposite of Rocky’s blue-collar existence, and it reminded me of a line in the boxing documentary “Champs,” where an interview subject states that “nobody rich ever took up boxing.” Donnie has clearly benefited from the spoils of Apollo’s legacy, yet a childhood filled with scrapes with the law and constant fisticuffs leads him to quit his successful job for one where the odds for success are far more limited. Mary Anne points this out in an excellent speech where she details the more unsavory aspects of living with a boxer whose body took so much punishment that he could barely perform simple tasks like walking up stairs or cleaning himself. Donnie hears her, but the clarion call of the ring carries him off to Philly to seek out his Dad’s former rival and best friend, Rocky Balboa.

Donnie hopes that Rocky will train him, and sets out to convince the reluctant ex-boxer to do so. But Rocky is simply not interested in becoming a mentor to the up and coming boxer who affectionately calls him “Unc”. Rocky’s lack of interest remains even after Donnie reveals that he is Apollo Creed’s son. To bring new viewers up to speed, Rocky talks about the fight that cost Apollo his life, and how Rocky was in Apollo’s corner at the time. To return to the corner, even with a different boxer, is not on his list of things to do, partially out of guilt for Apollo, but mostly out of a general sense of exhaustion. “I already had my time,” he tells Donnie. Of course, Donnie wears him down and, despite some jealousy from a coach at Rocky’s late trainer Mickey’s old gym (who had hoped Rocky would train his son), Rocky takes on Donnie’s mentorship. This eventually leads to an offer to fight Liverpudlian boxing champ Pretty Ricky Conlan (Tony Bellew).

In parallel, Donnie also pitches woo to his downstairs neighbor Bianca (Tessa Thompson), a hearing-impaired singer and composer whose loud music keeps Donnie from getting the required sleep he needs for his training. Like Rocky’s beloved Adrian, Bianca is a fully fleshed out character whose agency is not undermined by her eventual devotion to our hero. Thompson, so good in “Dear White People”, is even better here, singing her own songs and verbally sparring with Jordan as quickly as the real-life boxers he faces throw punches at him. Coogler relishes his love story as much as his action sequences, basking in the glow of their romance. At one point, he employs an upside down shot of the duo, laying side by side and engaging in a quick kiss that’s chaste yet sweetly romantic. A later romantic scene is far more passionate, and feels well-earned thanks to the prior one.

“Creed” reminds us that, even at its most absurd, the “Rocky” series has always been about loss. Specifically, how these losses affect the characters and how they grow from them. This is expressed in Bianca’s desire to make as much music as possible before her hearing loss becomes total and permanent, but it’s also reflected in the character of Rocky himself. The genesis of this film stems from the most absurd of the Rocky movies, yet “Creed” stitches “Rocky IV” and all the other Rocky films into its narrative with surefooted grace. The method to this madness is explained in a haunting, beautiful speech delivered by Stallone, who points out the consequences of his losses, both personal and professional, how alone he is due to the deaths of everyone he has loved, and how he no longer has the will to fight. Beforehand, we see Rocky visiting the graves of Adrian and Paulie (on the latter’s tombstone, he places some booze), and the specter of Apollo’s death hangs over “Creed”. Rocky also tells Donnie that his son has little to do with him.

Rocky’s big speech comes after a scene where he gets some bad news (which I’ll not spoil). Watch how subtly Stallone plays his reaction—he turns the simple gesture of removing his hat into a powerful lament. Coogler loves the faces of his actors, to the point where he shoots one boxing match as an unbroken take focusing on his boxers’ punch-laden mugs. He also gets an achingly beautiful and subtle commentary out of brief shots of young, brown faces looking at and admiring Donnie as he trains. Like Rocky, Donnie may be a hero for all races, but these shots of young Black children add an extra dimension by showing us rare instances of African-American admiration of a hero onscreen.

“Creed” is at its most effective when Coogler’s camera stands by, patiently letting his actors connect with us. He favors shots where two actors occupy the screen, taking care to calibrate the space between them. As a result, we become intimately familiar with the lovely young visages of Jordan and Thompson, and the gloriously craggy face of Stallone, whose once equally youthful appearance has grown and aged like the faces of those of us who were present for his first turn as Rocky Balboa. Stallone brings us back to his first, Oscar-nominated turn as Rocky, and his intimate knowledge of his character shines through in every frame. He is really, really good here.

“Creed” gives us a new hero, and Jordan is excellent at portraying him. The star, who worked with Coogler on the superb “Fruitvale Station,” conveys the confusion that many young people have while forging and accepting their identities. The moment he owns up to his heritage is intertwined with the film’s rousing, climactic boxing match but does not depend on it as a means of Donnie’s acceptance. Coogler is masterful in these shots of sportsmanship, stirring the audience into a frenzy of excitement, and he knows exactly when to shamelessly plug in “Gonna Fly Now.” Donnie Creed also gets his own version of Rocky’s triumphant Philadelphia Museum stairs run scene, re-imagined here as a street jog surrounded by motorcycles. It’s absolutely breathtaking. Note where Coogler places Stallone in this sequence, as it is the most visual representation of what his film is doing with these characters.

Speaking of the Philadelphia Museum, “Creed” ends there with a scene guaranteed to wring a bucket of tears from fans of Rocky Balboa. I wouldn’t dream of spoiling the reasons why “Creed” ends here, nor will I say who’s in the scene. But I will tell you this: The last shot of this film is a true thing of beauty. This is one of the best films of 2015. 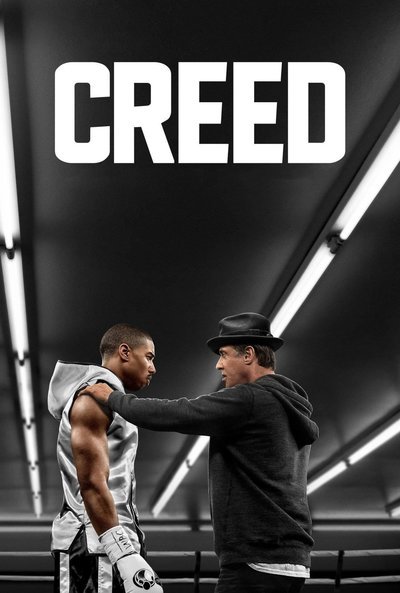 Rated PG-13 for violence, language and some sensuality.

Michael B. Jordan as Adonis Creed