"Chi-Raq" is a modern-day musical satire about violence and guns and men and women and sex and power. Its title is a slang term coined by residents of Chicago's violence-plagued South side, empowered by statistics showing that more Americans have died from gunshots in the last twelve years than soldiers involved in the American occupation of Iraq. The movie is angry and horrified and mournful but also warm, sensual, life affirming, and so blisteringly funny that critics and political commentators are sure to blast it as distasteful.

No matter: "Chi-Raq" clearly does not give one-fiftieth of a damn what anyone thinks of its methods; it knows what it is and what it wants to do and commits to its singular vision from start to finish. It's a movie that only Lee could have directed with such imagination, high and low wit, and sorrow. It is the director's first straight-up, unabashed musical since "School Daze," his best work in at least ten years, and a culmination of tendencies we've seen percolating in his work since his 1986 debut feature "She's Gotta Have It."

The film is co-written by Lee and independent filmmaker and University of Kansas film professor Kevin Willmott ("CSA: Confederate States of America"). It has a plot drawn from Aristophanes' ancient Greek comedy "Lysistrata" and dialogue written mostly in rhyming couplets ("In the style of his time/Aristophanes made that shit rhyme!") It features spectacular, gliding widescreen camerawork by Matthew Libatique, nearly nonstop musical numbers, eruptions of bawdy sex and appalling violence, and a narrator played by a fedora'd Samuel L. Jackson who stalks through the film in an array of dazzling suits, playing essentially the same role that he played in "Do the Right Thing" by way of the stage manager in Thornton Wilder's play "Our Town." Its loopy magnificence makes every other current American film in wide release seem comparatively timid. And that's the triple truth, Ruth.

Rapper-actor Nick Cannon stars as Demetrius Dupree, leader of a purple-clad gang called the Spartans that have warred for years against the orange-clad Trojans, led by the fearsome but humor-impaired Cyclops (Wesley Snipes, who of course wears an eyepatch). The film begins with Cannon's uninterrupted, four-minute performance of the film's title track, which plays out as audio-only: no actors, no dancers, no scenery, just a black screen with lyrics superimposed in bold lettering, maybe the most audacious use of onscreen text in a major motion picture since Jean-Luc Godard's heyday.

Then we see a horrifying close-quarters shootout during a live rap show where Demetrius taunts Cyclops. Soon after, an 11-year old girl (the daughter of a character played by Jennifer Hudson) is killed during a shooting incident, and Demetrius and his girlfriend Lysistrata (Teyonah Parris) are temporarily made homeless by an arson fire that was meant to drive them out of their apartment so that the Cyclops could kill his most hated foe. Something is about to change. Something has to change. The people of Chi-Raq have grown existentially blasé about the violence because they think there's no way to stop it; but this latest round is just too much for them. As Jackson's neighborhood DJ, Mister Senor Love Daddy, asked in "Do the Right Thing"—in mirrored phrases that anticipate this film's ostentatiously poetic language—"Are we gonna live together? Together, are we gonna live?"

Lysistrata moves in with her neighbor across the street, a nonviolence advocate known only as Miss Helen (Angela Bassett, who has the eyes and voice of a Greek oracle). Under the older woman's tutelage, Lysistrata hatches a plan to stop the violence: she will urge every woman who's involved with gang members to deny her man access to sex, and only restore "privileges" when the gangs sign a peace treaty and agree to put their guns down. "The red wine has been drunk/The plan has been strunk!" the narrator exclaims, in a delightful bit of Dr. Seussian rhyme-mangling.

The movement spreads beyond Chicago and then beyond U.S. borders, encompassing prostitutes and phone sex operators as well as the sex partners of criminals, politicians, lawyers, cops and, seemingly, every man alive (there are even lines suggesting that some gay men are going on strike, too), and sparking a worldwide feud between the sexes. The increasingly militarized police forces of major cities, and the military proper, are deprived of carnal pleasure until they agree to embrace peace. Lysistrata and her women occupy the National Guard Armory by seducing the staff (including David Patrick Kelly's Confederate apologist, General King Kong (a nod to "Dr. Strangelove") and move the local chapter of a fez-wearing, African-American fraternal organization (led by the great Steve Harris of "The Practice") to lead a counter-protest and plan an insurgency to end what they believe to be an unconscionable dry spell. "These hos have literally shut down the penis power grid!" he almost-whines.

John Cusack shows up as a white priest in a black church (he later explains that he grew up in the neighborhood) who delivers a long, blistering sermon on violence and guns, state indifference and community paralysis, until his voice goes hoarse. It's another kind of musical number, one powered by the musicality of Biblical language and evangelical locutions, the words dipping and rolling and twisting and jumping, the speaker's volume rising and rising and rising, the congregation murmuring and muttering and shouting: Amen! Amen!

Lee's 2000 satire of television and racism, "Bamboozled"—which has been recently reclaimed as a lost masterpiece, but that I never particularly liked—started with a dictionary definition of the word "satire," which is the surest possible way to signal that a movie has no real control over its tone. "Chi-Raq" requires no such audience hand-holding. It is eerily sure of itself, a true satire, at once serious and irreverent, ridiculous and sublime. And like most of Lee's best work ("Do the Right Thing" especially; the more I think about this new movie, the more it feels like a companion, even a mirror, to Lee's 1989 masterpiece) it doesn't cook the viewer's interest into paste by sticking to one emotional temperature for too long.

Many stretches of "Chi-Raq" are purely musical or purely comedic. But others are explicitly polemical, as when Miss Helen shames Lysistrata for her supplication to Demetrius and gives her brief history of gangs and guns in Chicago, or when Jackson's narrator drops knowledge about the history of violence in the United States and the country's institutionalized legacy of oppression and genocide. Still other scenes are beautiful for beauty's sake, as when Libatique's camera watches an elevated train pull into a station at night. And throughout, there are moments when Lee's direction makes the images themselves seem to dance along with the dancers: watch for the moment in an armory dance number when the image bisects into two very wide, skinny, lateral split-screens, and the motion of a female dancer dipping down low in her frame seems to "push" the frame beneath her off'-screen.

Every Lee film has an affinity for the theatrical. Characters sometimes stand at center stage (center screen in a film) and talk right to the audience, often in a tight closeup, or chatter among themselves to create a communal buzz that can feel like what 1960s activists might have called a "rap session" ("rapping" as in talking; see the guys on the street corner in "Do the Right Thing," or the women debating the politics of skin color in "Jungle Fever"). Sometimes—as in the birthday present to Nola in "She's Gotta Have It," much of "School Daze," the opening credits of "Do the Right Thing," the Harlem sequences of "Malcolm X," and the dance floor number in "Summer of Sam"—Lee's characters burst into dance, or song, or both. Lee has often said that he wanted to make another full-on musical after "School Daze" but never got around to it, although he kept circling versions of "Rent" and "West Side Story" without landing on them. There is a sense in which Lee has always been a theatrical director, as well as a rhetorician or commentator and a stand-up comic, even as he proved himself a master of images who directs in a way that's equally intuitive and intellectual (not unlike a jazz musician who sticks to the sheet music sometimes, but improvises other times). All these complementary and conflicting aspects of Lee come together in "Chi-Raq," a movie that's held together by force of conviction.

Is the movie self-conscious, busy, perhaps all over the place? Absolutely. But this is what a Spike Lee film is, and does. And here, at least, it all seems to be of-a-piece, because the whole thing has been conceived by Lee and Willmott as a spectacularly cinematic equivalent of a stage play: a bit of literal street theater (with reference to gang and drug war and police brutality incidents dating back to the eighties) that aims to provoke and astonish, surprise and shock.

The movie does all of these things and more. There are scenes that are gut-bustingly funny, other scenes that are intensely sexy (especially the final musical number, a "duet" of sorts between Cannon and Parris). And from time to time the movie seems to calm down and clear its head so that it can concentrate on a single character at a single moment, often one of great distress. I will never forget the sight of Hudson's grieving mother on her knees in the street, trying to scrub her daughter's blood from the pavement with a sponge.

The movie offers no answers to the problems it presents—rampant street crime in poor neighborhoods; a gun-worshiping American culture tied to capitalist rapaciousness that's hooked into the country's culture of Permanent War; the lure of machismo, which makes violent confrontation seem "sexier" than negotiation and de-escalation. But it is not a film's job to offer answers. The job of a movie like this one is to stimulate arguments and hook itself into the viewer's imagination, and "Chi-Raq" accomplishes that job brilliantly. Its timing could not be worse, or more perfect. It is the movie we need right now, whether we're willing to admit it or not. 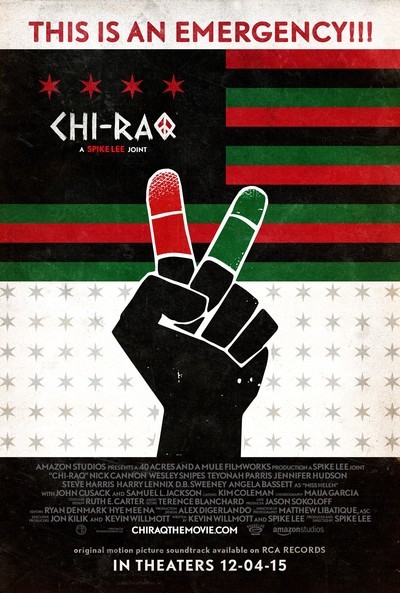 Rated R for strong sexual content including dialogue, nudity, language, some violence and drug use