The 2016 South by Southwest Festival in Austin, Texas kicked things off with a much-publicized appearance by President Obama speaking about the future of the fest’s interactive entrepreneurs and how technology can be used to further our country’s way of life. The President did not stick around to catch more than the local tacos that the city’s expansive fest has to offer. That’s too bad, since some of the titles offered on the film side of the music & movies program this year cut close to the current political scene. But if there was ever a place to escape the too-nutty-for-fiction facts about who may be taking over the President’s job in January, it is certainly in the warm embrace of this film lover’s paradise. 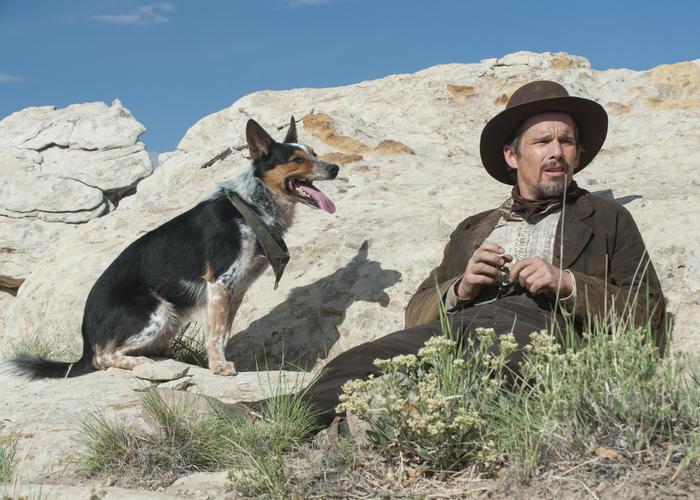 Slow burn horror master Ti West (“The Innkeepers,” “The Sacrament”) premiered “In A Valley of Violence” [pictured above] this weekend, and, surprise, it’s not a horror film at all. It is a western starring Ethan Hawke as a thirsty drifter, accompanied by his trusty, self-reliant dog. When a confrontation goes in Hawke’s favor, he is targeted by a gang of dimwitted followers and thrust into a quest for revenge. The comparisons to Keanu Reeves’ “John Wick” are inescapable (a film which owed a great deal to “Road to Perdition” itself.) But many modern action films draw their style from the western genre, so it’s only fair to watch it go the other way. West has fun with the “tough guy” archetype here, even bringing in John Travolta as a wannabe peacekeeper who finds himself just as much over his head. Employing knowing winks to the spaghetti westerns, West continues to be a smart filmmaker, having fun making movies that go from quiet calm to bloody mayhem. 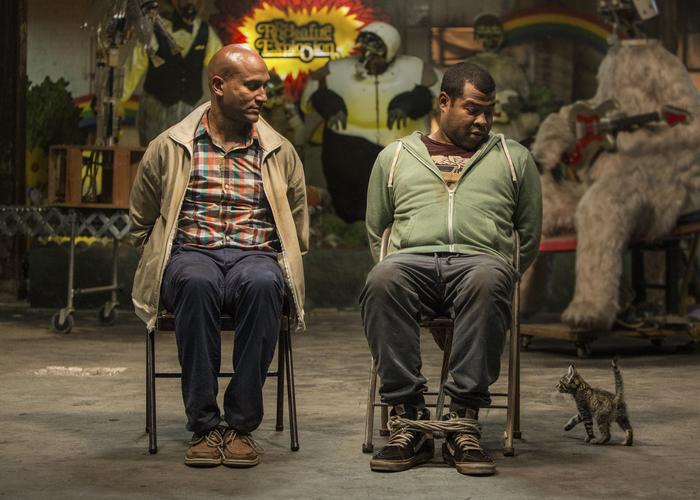 Keegan-Michael Key and Jordan Peele have been two of the freshest sketch comedians on television in the past decade. After ending their stint on Comedy Central, they are now poised to make their mark on the big screen. Their first film effort, “Keanu" [pictured above], was co-written by Peele, who also stars as a lonely guy going through a bad break-up whose life is reenergized when a tiny kitten appears at his doorstep. Adorably cute even by the cutest of kitten standards, the newly-named Keanu was once the property of a ruthless drug dealer. When the cat goes missing, he teams up with his best friend (Key) to infiltrate the drug ring and pose as tough guys until Keanu is his again.

While the film starts off with a lot of energy and even a noticeable emotional undercurrent in the newly formed pet relationship, it becomes clear that even these fresh comic minds are not immune to the trap that is a skit pushed well past its expiration. By the 18th George Michael joke and racially-charged ruse that begins to feel like you are watching Pryor & Wilder’s entrance into the jail in “Stir Crazy” on repeat, “Keanu” has already worn out its welcome before it shifts into an excessively violent climax. A couple of inspired cameo appearances help break the monotony, but even serious fans should hope that this one-note effort gives way to greater inspiration in their next effort. 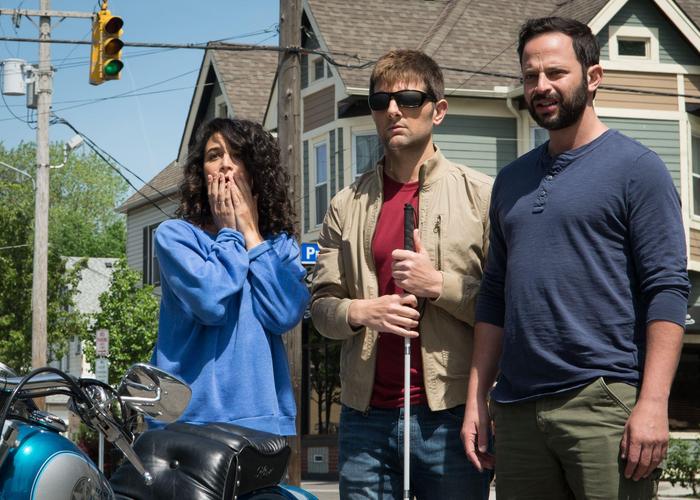 Writer/director Sophie Goodhart’s “My Blind Brother” [pictured above] belongs to a string of recent indies featuring a mix-and-match combo of fellow comedians—“Adult Beginners,” “Obvious Child,” “The Overnight,” Sundance 2016 hit “Joshy,” TV’s “Parks and Recreation” and HBO’s animated “Animals” helped familiarize the names of Nick Kroll, Jenny Slate and Adam Scott. Many of them are amiable stories of arrested development with lead characters trying to break out of a funk, putting their slacker life into order or falling in love. This indie comedy subgenre of personal growth makes “My Blind Brother” all the more familiar, but thanks to its strong cast and attempts to bridge the second and third dimensions of these stereotypes, it actually finds way to break out of that familiarity.

Kroll plays the guide dog brother of Scott’s visually impaired and self-involved overachiever. When he unknowingly takes on his brother’s one-night stand (Slate) as his assistant and eventual girlfriend, the less assertive Kroll begins a power struggle to win back the emotionally-stunted Slate, still reeling from a tragic breakup of her own.

The screenplay doesn’t take a lot of risks with the material but it begins to pop thanks to Kroll and Slate giving their all to make their characters into adults rather than rom-com pawns. The always-reliable Scott pushes the film to a darker edge by not painting the impaired community as saints who have to be coddled. It could have used a bit more of that as Scott mostly comes off as a jerk throughout (although not entirely without cause), but the film coasts nicely on the backs of Kroll and Slate and some genuinely hysterical moments. 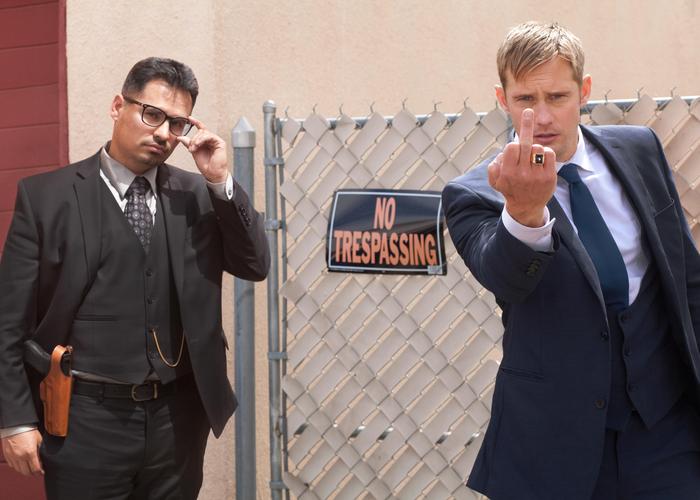 In a festival known for wild narratives, it’s surprising to see John Michael McDonagh (the writer/director of “The Guard” and “Calvary”) deliver the nuttiest film I’ve seen in this year’s program (at least of the non-animated variety.) “War On Everyone” [pictured above] is a hybrid of ‘70s TV cop shows infused with the Shane Black/buddy interplay of the late ‘80s and early ‘90s while wading around in an almost indecipherable Elmore Leonard crime plot.

Michael Peña and Alexander Skarsgård play two detectives who burned the rule book a long time ago, now trying to come out rich on the other side of a racetrack heist. When the gambit goes off the rails and they are thrust into solving the case (and reclaiming their payout) it leads them into an international crime syndicate that gets darker the further they go down the rabbit hole.

Leaving the plotting behind is probably a good idea as there are enough quirky characters and accented hooligans to keep one distracted while McDonagh attempts to insert humanity into his relationships. It's when the moral compass of the film is on hiatus that "War on Everyone" really burns like a . The interplay with Pena and Skarsgard is never less than riotous and at times refreshingly deplorable. There was a bit of this pitch-black McDonagh visible in his debut feature “The Guard,” though it would be easy to mistake this for the outlandish violent sensibilities of his brother, Martin, who was responsible for “In Bruges” and “Seven Psychopaths.” “War On Everyone” has much more in common with those films than the reverential examination of faith in “Calvary.” 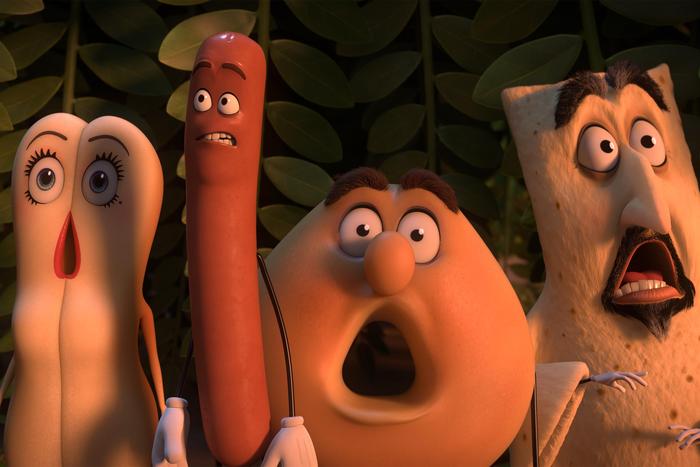 Unlike most “work-in-progress” screenings at SXSW, where that usually means color-timing or decisions over final credits have not yet been finalized, Seth Rogen & Evan Goldberg brought a more literal one to this year’s event. “Sausage Party” [pictured above], an animated comedy about the antics of food products in a grocery store, is still a full month away from finishing certain sequences with moments in the film that were portrayed with still frames as the dialogue continued. However, what was on-screen did not just surprise a usually predictable Austin crowd, it may turn out to be the best film to play the entire festival. Leave it to Rogen & Goldberg to turn a passion project about a male hot dog (voiced by Rogen) hoping to merge with a lady bun (Kristen Wiig) and evolve it into a theological discussion of what happens when they leave the store for “the great beyond.” It’s a classically-structured animated adventure tale with heroes (including a bickering bagel voiced by Edward Norton doing his best Woody Allen, and a pita looking forward to spending time with bottles of extra virgin olive oil) out of their comfort zones on a journey to get back the natural order. What they discover causes a potential uprising that makes Stephen King’s “The Mist” tame and a climax that would make Warren Beatty’s Bulworth proud. Rogen and Goldberg tapped into this a little in their apocalyptic “This is the End,” but here put it all out on the table for all warring belief systems to find common ground. “Sausage Party” is gloriously R-rated and entendre-filled, but, like the best episodes of “South Park” (along with its big-screen venture), it uses such vulgarity to tee up greater satirical goals.