There’s a strange thing that happens when you become a parent. Clearly, many strange things happen. But one of the primary ones is that you get a whole new set of friends.

These are parent friends: people you probably never would have met otherwise, but with whom you now have this fundamental and cosmic thing in common. An instant bond, if you will, whether you want it or not. Maybe they’re the parents of a kid in your son’s kindergarten class or your daughter’s soccer team. Maybe they’re a random couple or a single dad you meet at the park. And along with meeting these people comes a whole new vulnerability. You’re putting yourself out there for acceptance, all over again, as a grown person. You want your kids to get along, but, crucially, you want to be liked, too.

It’s a tricky balance to strike, and it’s fraught with potential for some unlikely alliances. Writer/director Patrick Brice completely gets that dynamic—and explores it for deliciously awkward comedy—in “The Overnight.”

Brice’s brisk and beguiling little indie takes you in various directions over the course of a long evening, but not necessarily the ones you might expect. You may think you know where a certain scene is headed—and it doesn’t go there, or it goes there with a slight twist or detour. His film is deft and delicate and exquisitely uncomfortable, but it also offers revelations that are joyful, sad and true.

It helps greatly that Brice has assembled a group of actors who are game for every adventure in Adam Scott, Taylor Schilling, Jason Schwartzman and Judith Godreche. They all get opportunities to shine and flex their muscles, in large and small ways, both as a foursome and in various permutations of paired-off couples.

It’s hard to write about this movie without giving too much away, but here goes …

Scott and Schilling star as Alex and Emily, a married couple in their 30s who’ve just moved with their young son, RJ, from Seattle to a trendy section of Los Angeles. They know no one and they long to make friends—especially Alex, who’s a bit more unmoored than Emily, who has an actual job in L.A.

One morning at the local playground, their son connects quickly with another boy who’s about his age. The boy’s dad (Schwartzman’s Kurt) walks over and greets Alex and Emily with a familiarity that’s simultaneously intriguing and odd. In no time, he’s invited all three of them to a casual pizza night at their house with his wife and son. It’ll be a good chance for the boys to play some more and for the two couples to get to know each other, Kurt says. Relieved at the prospect of making new friends, they say yes, figuring that the worst thing that can happen is sharing a couple glasses of wine with a couple of bores.

The fact that they don’t quite know what to make of Kurt—with his hipster dress and hearty demeanor—sets the tone for the rest of the film. (Schwartzman keenly plays with his sometimes off-putting, know-it-all persona.) And when they walk through the gates of Kurt’s Spanish-style mansion in the hills, only to be greeted by his glamorous and gorgeous French wife, Charlotte (Godreche), they feel even more intimidated and insecure.

But Kurt and Charlotte go out of their way to make their new friends feel welcome, including lulling the boys to sleep in an upstairs bedroom after dinner to allow the adults to stay up and party longer. And that’s about all I’m going to say about that. Suffice it to say, the couples get to know each other in ways they never could have imagined at the outset, with some moments of true hilarity and others that push the possibilities of absurdity.

That brings up another thing that happens when you have kids: You cling to the notion that you’re still young and fun and not old and lame. Brice also gets this by giving us characters who begin by being polite with each other, but end up pushing their own boundaries—and each others’—and baring their souls. (It’s especially enjoyable to see Scott, best known for his improv comic abilities, get a chance to stretch with more dramatic material.) This may sound heavy, but Brice navigates the highs and lows smoothly, and his actors bring just the right energy to their ever-changing roles.

Brice steadily ratchets up the tension and keeps us guessing as to what everyone’s true intentions are. But eventually, the will-they-or-won’t-they of a modern-day “Bob & Carol & Ted & Alice” gives way to an eeriness and a sense of true menace when the wives go on an impromptu field trip in the middle of the night. Cinematographer John Guleserian bathes the otherwise understated production in a garish, orange light during this section, which signals a shift toward heavier and more intimate terrain in the third act.

"The Overnight" probably couldn’t have gone on too much longer—at some point, the sun has to come up—and it may not stay with you for long after it’s over. But see it with someone you love, and then just try to feel smug about the security of your own relationship afterward. 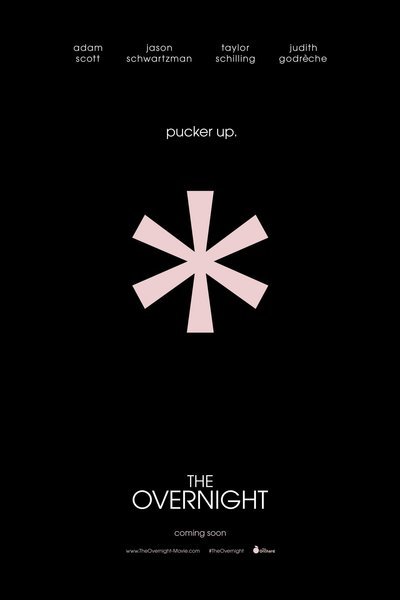