Low-budget horror tyro Ti West evokes Jonestown for a generation of viewers too young to remember the place, or the horrific event named for it, in "The Sacrament." West is such a technically accomplished filmmaker, and his cast of semi-regulars so committed to the narrative, that the resultant movie gives enough unsettling atmosphere and upsetting gut-level shock that this viewer didn’t mind too much all the stuff he wasn’t getting, such as intellectual coherence, not to mention any kind of profound insight into the cult hive mind.

West sets his story in the present day. The movie’s weakest sequence is its opening, done in faux-televised video style with static-punctuated jump cuts, showing a meeting at the offices of edgy media entity Vice (a written prologue explaining to the audience what Vice is ought to win a prize for Lamest Prose To Appear In A Motion Picture Nearly Ever) at which "fashion photographer" Patrick (Kentucker Audley) recounts to beardo editor Sam (A.J. Bowen) that his formerly drugged-out sister has quit the United States to live at some kind of sober commune that sounds kind of like a cult. Sam smells a story, so he, Patrick, and videographer Jake (filmmaker Joe Swanberg) set off to "Eden Parish" to check out the scene. There they find Patrick’s sister Caroline (Amy Seimetz), now bright-eyed and bushy-tailed and clean, but a little freaked out by greeting a shoestring camera crew. She’ll have to check with "Father" to see if these documentarians may be permitted to document.

Folks of a certain age, or those who know a bit about nasty episodes in U.S. history, will have some idea of where this is going. The expression "drank the Kool Aid," although historically inaccurate, has its roots in the Jonestown affair. Is that a spoiler? In any event, the intrigue is less in the tale than in the telling. The setup for the film suggests a "Blair Witch" style found-footage picture, but West wisely avoids that route. Yes, much of what we see is through the perspective of Jake, but as his character’s a professional, it makes sense that the resultant digital video imagery straddles the ground between found-footage style rawness and more polished feature documentary style. This allows West the stylistic latitude to be more overtly expressive in his imagery. And to set up interestingly corresponding visuals against character observations such as "this is nothing at all like the hippie commune we were expecting."

Indeed, it is not, and the movie gains much power via the performance of the cast’s oldest principal player, Gene Jones as the homey but steely "Father." Jones has a background in voiceover, and his rich, mellifluous Southern tones imbue his character with a coziness that can turn sinister on a dime.

In his eagerness to get on with the awfulness, West risks some plausibility complaints. The real Jonestown imploded after a year of investigations into the Guyana commune led by the Reverend Jim Jones (who, back in the day, was the subject of several fictionalized accounts, including the memorably titled "Guyana: Cult of the Damned"); in "The Sacrament," they’re mixing up the fruit drink after one night of scrutiny from the Vice crew. I know that people consider male urban hipster journalists pretty irritating, but come on. Once things build to a sickly conclusion, West takes advantage of the momentum to indulge in some pretty crass grindhouse exploitations. For all that, the movie gets its disreputable work done; not only will "The Sacrament" creep you out, it’ll also make you want to shower. That’s not nothing. 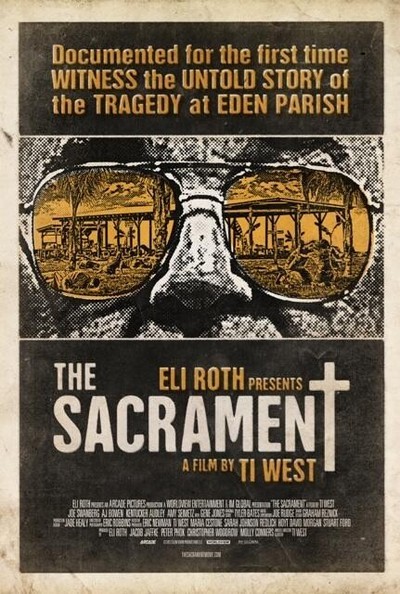