Acclaimed documentary filmmaker Stanley Nelson will receive the Lifetime Achievement Award at the 37th News and Documentary Emmys on Wednesday September 21st at the Lincoln Center. Hailed by AFI president and CEO Bob Gazzale as “one of our nation’s preeminent historians,” Nelson has made such films as 1989’s endearing “Two Dollars and a Dream,” 2006’s galvanizing “Jonestown: The Life and Death of Peoples Temple,” and last year's equally essential “The Black Panthers: Vanguard of the Revolution.” Nelson has already earned three Primetime Emmys, his first for 1988's "The Murder of Emmett Till," and his next two for 2010's "Freedom Riders."

At last year's AFI Docs festival, Nelson was honored at the annual Guggenheim Symposium. In an onstage conversation with The Washington Post critic Ann Hornaday, he reflected on his painstakingly personal 2004 film, "A Place of Our Own." The film primarily took place at the black resort community, Oak Bluffs, located on Martha’s Vineyard, where Nelson spent four decades worth of summers. The director struggled with the decision over whether to include candid footage of a conversation he had about the things black people do “in order to make white people comfortable,” before eventually keeping it in the final cut since it’s the sort of issue routinely missing from films. When Hornaday asked if he feels the burden of being “the explainer,” Nelson shook his head, arguing that he has no intention of being the African in “Tarzan” informing the white men about “what the drums mean.” “I’m making my films for black people,” Nelson said. “If they see something new in them, then obviously, white people will also see something new in them as well.” 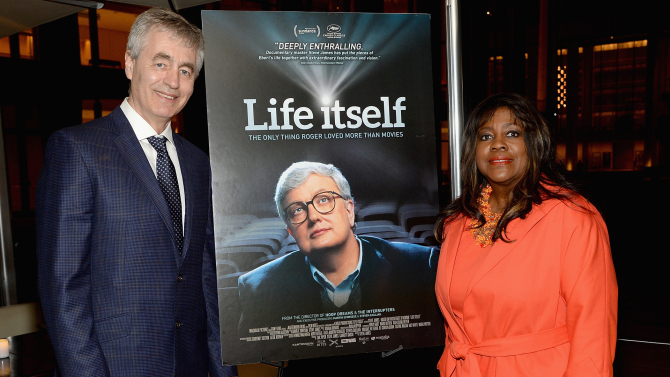 "Life Itself," Steve James' beloved documentary about Roger Ebert, has been nominated for Best Documentary and Outstanding Editing by The National Academy of Television Arts & Sciences (NATAS). The film was produced by CNN Films and Kartemquin Films, and James shares his editing nomination with co-editor and longtime colleague, David E. Simpson.

CNN Worldwide was honored with a total of 15 News & Documentary nominations setting a new network record.  And Kartemquin Films earned a third nomination for Anne De Mare and Kirsten Kelly's "The Homestretch," about homeless high school students in Chicago.