The Black Panthers: Vanguard of the Revolution

“The Black Panthers: Vanguard of the Revolution” opens with an old "Soul Train" clip of musical legends, The Chi-Lites. “For God’s sake,” the group sings, “why dontcha give more power to the people?” The Afro-clad quartet deliver their message of protest with a funky groove, a technique director Stanley Nelson adopts for this documentary. A river of protest soul music runs through the film, underscoring the visuals and influencing the smart editing choices by Aljernon Tunsil. He and Nelson traverse a structured arc as if designing great drama, presenting a slew of talking heads, film clips and rarely seen photographs. The film avoids hagiography, and in doing so, brings out the undeniable humanity of its subjects.

PBS strikes again with another fine documentary about the Black Power movement. “The Black Panthers: Vanguard of the Revolution” would make a fine double feature with 2012’s “The Black Power Mixtape.” That film stunned me, leaving my mind racing with thoughts and ideas. In my RogerEbert.com review, I wrote that “Mixtape” took me “back to the days when I came to a mature understanding of the implications of being Black, male, and broke.” The same can be said for Nelson’s documentary, but “Vanguard” also added an unnerving sense of déjà vu. “If you live long enough,” an elder once told me, “life starts to feel like a merry-go-round.” Viewers will be struck by how eerily familiar and current the tactics depicted in this film are. In the grand scheme of oppression, fifty years is apparently long enough for history to repeat itself.

"Vanguard” reminded me that every generation has its media-fueled boogeyman, and it’s usually a brown one. The American majority of my parents’ generation was scared out of its wits by the Black Panther Party, an Oakland-based group fighting for the civil rights of African-Americans. Founded in 1966 by Huey P. Newton and Bobby Seale, the Panthers had a multi-point plan and a savvy command of the fine art of media manipulation. They presented a tough, military-style image that ran counter to the suits and Sunday-best attire of protest marches and sit-ins. They published a newspaper, like the Nation of Islam did, that detailed events and delivered news to the Black community. They provided a breakfast program for poor kids. And they used the Second Amendment to great effect by blatantly carrying loaded guns in a state that had an open carry law. Whenever confronted about this by the police, Newton would recite the California Penal Code that made his weapon legal.

Throughout the film, Nelson turns to members of the Black Panther Party to set the scene and tell their story. He begins in 1966, where the tensions between police and the community In Oakland, California were at the highest levels in America. William Calhoun tells us that “there was absolutely no difference between the way the police treated us in Mississippi as they did in California.” As a result, the Black Panther Party started out as a self-defense organization, acting as a watchdog for police brutality. As Newton and others explain their methods to prevent undue violence during arrests, Nelson alternates between their words and those of Ray Gaul, an Oakland police officer describing the same methods. “It was pretty intimidating,” Gaul says.

Far more intimidating was the day-to-day existence of Blacks throughout the U.S. “Being Black in America meant that you didn’t walk down the street with the same sense of safety, and the same sense of privilege, as a White person,” says Jamal Joseph, another Panther interviewed here. This lack of safety and agency did not go away when the Panthers came on the scene. Instead, their show of power was seen as an enormous threat to the American way of life, a threat that caught the attention of J. Edgar Hoover. The former head of the F.B.I. became even more fearful once the Panthers acquired charismatic characters like Eldridge Cleaver and Fred Hampton, both of whom could work a crowd as well as Malcolm X and Dr. King.

Hoover is as big a character in this tale as Newton, Seale, Cleaver and Hampton. Nelson zeroes in on Hoover’s memos and his language, drawing a parallel between the Black Panther Party and Black Lives Matter with no extra effort. The similarities are striking. Hoover’s FBI was going after a group whose origins were in protesting against police brutality. He called the Panthers a racist terrorist group that wanted to destroy America, and a certain faction of the media promoted this message by playing up a manufactured scariness factor. The Panthers interrupted a press conference held by Governor Ronald Reagan, proving they can also play the media game to get politicians to listen. Hampton was illegally gunned down by the cops, leading to a successful civil lawsuit against the Chicago police department.

And in memos, Hoover was constantly fearful of a “Black messiah” who will bend the ear of non-Blacks and turn them toward the Black cause. That last one took me by surprise, but there’s a sly, subversive reason Nelson puts it out there. Remember the GOP’s favorite term for Obama during the 2008 election cycle? It was “the Messiah.”

Though it masterfully highlights the similarities between the “radical” organizations of yesteryear and today, “The Black Panthers: Vanguard of the Revolution” makes an even better cautionary tale for today’s movement. After all, these institutions are run by people who are subject to the best and worst of human emotions, people who aren’t always right in their decision-making. This film shows how the Black Panther Party fractured between its two leaders Newton and Cleaver, and is unflinching in depicting what went wrong and how the FBI exploited it using informants and counterintelligence. “We thought the FBI wanted to kill us,” says Kathleen Cleaver. “I don’t think we understood how insidious their plan actually was.” The damaging elements of human nature turned out to be J. Edgar Hoover’s biggest ally. After a certain point, he just sat back and let the dissention he planted play out on its own.

In contrast to the song of protest and forward motion that opens his film, Nelson closes with Gil Scott-Heron’s mournful “Winter in America.” Against the hopelessness and exhaustion of that classic soul song, each of the film’s talking heads recite from the Black Panther Party Platform and Program. None of the platform demands are outrageous nor unusual. All of them remain as relevant, necessary and timely as this documentary. “The Black Panthers: Vanguard of the Revolution” deserves to be seen, studied and discussed. 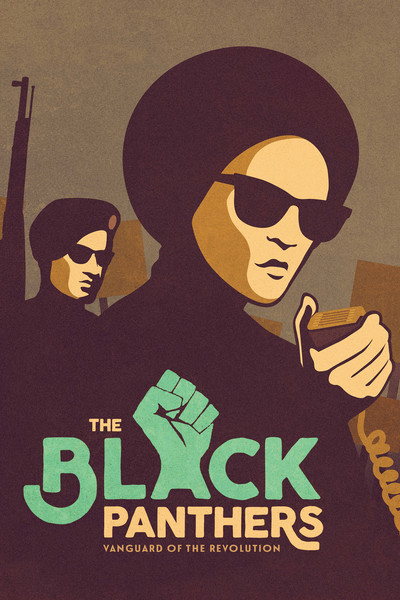 The Black Panthers: Vanguard of the Revolution (2015)