"The Homestretch" opens with a bleak statistic: Two to three thousand homeless children walk the streets of Chicago every night. The movie pauses, its conventional night shots of streets and its conventional acoustic-guitar led score filling the few seconds, asking the viewer to let that fact sink in.

What do you do with that fact when you read or hear it? Do you immediately politicize it? Do you reflexively ponder what might be wrong with the individuals who have no home, and why it’s probably their fault? It’s an interesting time to consider questions like those; it’s never not, but now it’s particularly interesting, let’s say.

Soon after the statistic, one of the three main subjects of the movie is heard saying: “Is this the life I’m gonna live the rest of my life?” Directed by Anne De Mare and Kristen Kelly, “The Homestretch” immediately shifts from statistic to specific, telling the stories of three homeless kids, each one trying to complete a level of education that’ll give them a leg up in adult life, which seems to be coming at them like a rushing train. Immediately anticipating the what-did-you-do-to-deserve-this question certain viewers are likely to ask in an accusatory tone, Roque and Kasey are introduced grappling with Shakespeare; Roque tells of how he relates to “Hamlet” because of his mother’s behavior after his father was deported on account of an immigration issue. Kasey talks about the depiction of friendship and betrayal in “Othello.” The third subject, Anthony, reads a poem of his own early on.

The movie is a production of Kartemquin Films, the Chicago-based company founded by the filmmaker Gordon Quinn, the director of “Home For Life” and the executive producer of “Hoop Dreams.” “Homestretch” has a narrative structure not dissimilar to “Hoop Dreams,” but at about 90 minutes it doesn’t have the epic sweep. It doesn’t mean to. Its intimacy is a reflection of its compassion and its brisk directness is in the mode of a police bulletin: this situation is a problem, the viewer has to multiply Raque, Kasey, and Anthony by a thousand to understand how big the problem is in just one American city. “The Homestretch” invites you to empathize with its subjects, to worry with them, to laugh with them, to worry about them. It’s engaging and compelling viewing. But it ends on an implied call to action, telling of a facility for servicing homeless kids that lost funding, was eventually able to reopen, but now still has to turn away “an average of 15 young people every night.” After watching the movie’s subjects brave the harshness of a Chicago winter, the message that this is fifteen young people too many couldn’t be clearer. “There is no such thing as society,” Margaret Thatcher once famously said, addressing expectations that government do something about issues such as homelessness. This movie obviously doesn’t hold to that position. 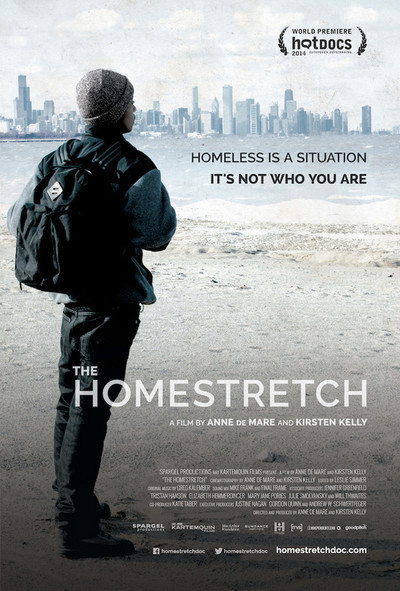