"Nobody joins a cult," says a woman at the very beginning of Stanley Nelson's documentary "Jonestown: The Life and Death of Peoples Temple." "Nobody joins something they think is going to hurt them. You join a religious organization or you join a political movement, and you join with people that you really like."

And she's right: You may follow a charismatic leader or an ideology or a utopian vision (religious, political, racial), but you don't think think of your behavior as cultish. At least, not at the time. When you "drink the Kool-Aid" (the phrase that has entered our language because of Jones), you don't know you're drinking the Kool-Aid; you're just evolving to a higher level of consciousness, getting into synch with like-minded believers. And it doesn't feel like brainwashing; it feels like a revelation.

That's more or less what the Rev. Jim Jones, of the Peoples Temple Christian Church, was pushing when he persuaded 909 of his followers to kill themselves and their children by drinking poisoned punch at his self-named Guyana settlement on November 18, 1978. He urged them (captured on tapes used in this film) not to fear death but to embrace it as "an act of revolutionary suicide protesting the conditions of an inhuman world."

"Hurry, my children!" we hear Jones tell his people, including parents who are giving cyanide to their own babies. "It's nothing to death. It's just stepping over to another plane." And they believed him.

How could this happen? As another man says in the film: "When you live in a dysfunctional family, you think it's normal."

Jones began his church in Indiana, moved to Ukiah, Calif. (after reading an Esquire magazine story touting it as one of the nine places in the world that was most likely to survive a nuclear attack -- an assertion as reality-based as most of Jones' preaching), then to San Francisco, and finally to his own "heaven on earth": Jonestown, built from scratch in the jungles of Guyana.

Jones got his start on the Pentacostal revival circuit, but based his ministry on breaking down racial and economic barriers between people. His focus, as one former congregationalist explains it, "was taken from the Bible, where Jesus in his earliest days, told people to sell all things and have all things in common."

Jones said: "Jesus Christ had the most revolutionary teachings..." -- involving feeding the hungry, clothing the naked, taking in strangers, ministering to the poor, the elderly and the ill in their suffering -- "and we feel nobody has really tried Christianity too effectively, or the Judeo-Christian tradition."

The socialist preaching of Jesus doesn't get much play in the fundamentally materialist culture of America today, but the selfless appeal of Christian agape was strong in the revolutionary, idealistic political and social climate of the 1960s and 1970s. Some former church members still insist that the Peoples Temple had the makings of something great and world-changing, had Jones not taken it in a dark, megalomaniacal and self-destructive direction.

By the end, even many of his followers felt Jones had gone crazy -- with power, booze, drugs and sex. He insisted he was the world's only heterosexual, that everyone else was homosexual and in denial, and he would have sex with parishioners as a way to help them deal with it. In the last days of Jonestown, he broadcast his own drug-slurred ramblings throughout the compound 24 hours a day. This is not the joyously integrated assembly, the "black church with a white minister," that had originally attracted so many enthusiastic believers.

"Jonestown" is a thoroughly conventional documentary -- archival footage, images and voice recordings alternating with talking head interviews. (It was funded by PBS' "American Experience" series.) But this familiar format also emphasizes the movie's universality. For while it's about a particular, peculiar phenomenon, and a shattering, generation-defining tragedy of its time (particularly those many friends and relatives in the San Francisco Bay area), the madness depicted here is not limited to Jim Jones. It is, as the woman at the beginning of the film implies, the dark-side potential of any religious, political or ideological movement, especially a cult of personality built around the carefully constructed and maintained image of a strong or charismatic leader.

The face of Jim Jones is, from a slightly different angle, the face of Stalin or Mao, of Christian or Islamic fundamentalism, of Baathism or American neo-conservatism -- any kind of ideology, rooted in certainty and the arrogance of infallibility, pursued with singleminded fervor, intolerant of free thinking or dissent, and that results, inevitably, in deadly consequences.

That kind of thing didn't die in Jonestown. 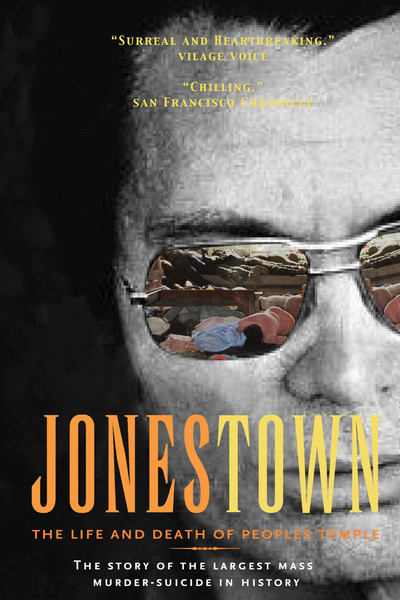 Jonestown: The Life and Death of Peoples Temple (2006)