It is, of course, ridiculous, unfair and arbitrary to deem any actor or actress to be "the best," either in an awards context or in terms of their entire career. That said, if someone wanted to make a case for France's Isabelle Huppert as the greatest screen performer of our time, regardless of gender, I would have no problem supporting such a notion. On paper, she has all the necessary stats to make such a claim--she has been working in films for over 40 years, has received awards and nominations throughout the world including a staggering 14 nominations (with one win) in her native country and has worked with many of the greatest filmmakers around--besides her celebrated collaborations with the likes of Michael Haneke (3 films to date), Benoit Jacquot (5 films) and the late Claude Chabrol (7 films), she has teamed up with such luminaries as Jean-Luc Godard, Catherine Breillat, Francois Ozon, Michael Cimino, Paul Cox, Olivier Assayas, Claire Denis, Andre Techine, David O. Russell, Raul Ruiz and the WWE.

More importantly, while most of the other screen actors deemed to be the greatest of their times have seen their  careers and reputations decline in their later years, she has continued to seek out risky and challenging projects to lend her talents. With her fierce intelligence, blazing sexuality and a willingness to play characters that most actors go to great lengths to stay away from so as not to sully their reputations, Huppert is that livest of screen wires and her mere presence in a film is not only enough to give things a jolt but signals to the audience that they will most likely be taken to strange and unexpected places along the way. Indeed, one of the very few performances of hers that could be labeled as disappointing was her turn in the title role of "Madame Bovary" (1991) and that was essentially because even she could not find a way to make such a warhorse of a part into her own. That restlessness and willingness to push herself into new and provocative areas even at an age when most other actors are content to coast on past glories with showy but shallow parts. 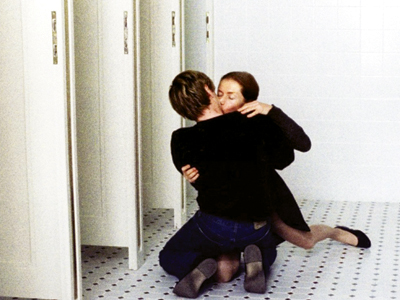 As part of its 50th anniversary celebration, the Chicago International Film Festival will be paying tribute to Huppert and her career through screenings of four of her favorite titles from her endlessly fascinating filmography and a photographic exhibition of portraits of her taken over the years that will be presented at the Alliance Francaise de Chicago. The films that she has chosen are 2001's "The Piano Teacher" (10/12), perhaps the most brutally intense of her numerous collaborations with director Michael Haneke; "Comedy of Power" (10/14), a 2007 film with another favorite collaborator, Claude Chabrol, in which she plays a magistrate obsessed with bringing down those guilty of massive corporate corruption; Claire Denis's 2009 drama "White Material" (10/14), in which she plays a woman determined to run her family's African-based coffee plantation in the face of intense civil unrest; and "Copacabana" (10/12), a 2010 comedy in which she plays a oddball mother at constant odds with her more conventional daughter (played by Huppert's real-life daughter, Lolita Chammah).

Born in 1953, Huppert studied at the Versailles Conservatoire and was still only a teenager when she began working professionally, first on the stage and then on the screen with her 1971 film debut "Faustine et le Bel Ete." She made her first big splash a couple of years later when she appeared in Bertrand Blier's still-controversial black comedy "Going Places" (1974) and the next year found her in her first major international film when she played one of five kidnapped heiresses in "Rosebud," a political thriller that proved to be arguably the nadir of director Otto Preminger's entire career and which failed to win her any real attention outside of France. That would come in 1977 with the release of "The Lacemaker," a powerful drama in which she plays a shy young woman driven to madness following the dissolution of her first love affair, a turn that would receive international acclaim and her first Cesar nomination for Best Actress. Her position as one of the most electrifying new actresses around was solidified the next year with "Violette Noziere," in which she played a young woman whose rebellion against her 30's-era bourgeois parents leads to murder. This was a significant film for her in many ways—it was her first film with the celebrated Chabrol in in addition to another Cesar nomination, she won the Best Actress award at Cannes.

Once again, Hollywood came knocking and she was signed on as the female lead for the eagerly anticipated new project from a director whose previous work was a critical and commercial smash that had just swept the Academy Awards. Alas, the director was Michael Cimino and the film was his epic Western "Heaven's Gate," a notoriously troubled production that went wildly over schedule and budget, every detail of which was reported in the press, and, when finally released, became an infamous box-office disaster that actually helped bring about the closure of the studio that produced it. While the grisly reception to the film presumably scuttled any immediate hopes for a career in the U.S. at the time, its reputation has grown considerably in the 34 years since its debut and its undeniable qualities are now better appreciated, especially Huppert's touching work as a frontier madam that is as intimate in scope and detail as the film surrounding it was expansive. 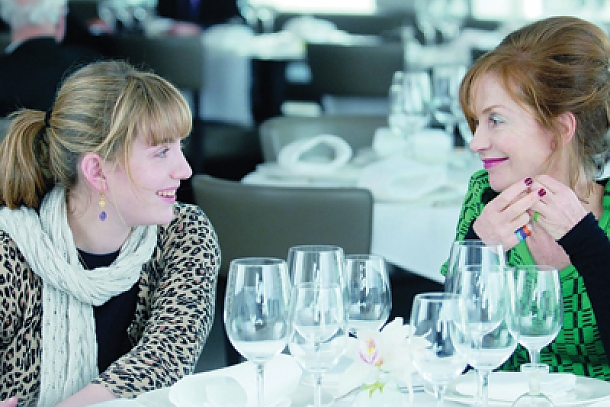 She returned to Europe and for the next two decades solidified her position as one of the continent's leading actresses, winning more accolades along the way. Among the films she made during this period were two features with Jean-Luc Godard—"Every Man for Himself" (1980) and "Passion" (1982)—the acclaimed crime drama "Coup de Torchon" (1981); the intimate women's drama "Entre Nous" (1983); "Story of Women" (1988), in which she played an illegal abortionist who was sent to the guillotine in 1943 for her crimes; "La Ceremonie" (1995), a dark drama for Chabrol that won her the long-awaited Best Actress Cesar; "School of Flesh" (1998) and "Merci Pour Le Chocolat" (2000). There were even a couple more stabs at working in American films during this time. "The Bedroom Window" (1987) was a largely unsuccessful modern-day noir from Curtis Hanson that saw her in a disappointingly conventional femme fatale role. A more salubrious collaboration occurred in 1994 when she appeared in "Amateur" for renowned indie filmmaker Hal Hartley.

In 1997, director Michael Haneke, one of the few filmmakers around whose intensity and willingness to undertake dark material rivaled her own, reportedly wanted to cast Huppert in his terrifying home invasion drama/meta-movie "Funny Games," but, so the story goes, she found it to be too bleak for her to take on. Four years later, they finally united for their first collaboration, "The Piano Teacher," and the result remains arguably the pinnacle of her entire career. In it, she plays a sexually repressed music teacher who becomes obsessed with a 17-year-old prospective student (Benoit Magimel) and initiates an affair with him in which he is meant to satisfy her increasingly masochistic desire—a relationship so consuming that when she suspects that a pretty fellow student is making a play for him, she puts broken glass in the girl's pocket before an important audition to destroy her chances at success. On the surface, it seems impossible that the end result could be anything other than a perverse freak show but there is a surprisingly degree of humanity amidst the kinkiness, thanks in large part to Huppert's devastating, pitch-perfect and oddly empathic performance, which earned her another bushel of awards topped by her second Best Actress award at Cannes. 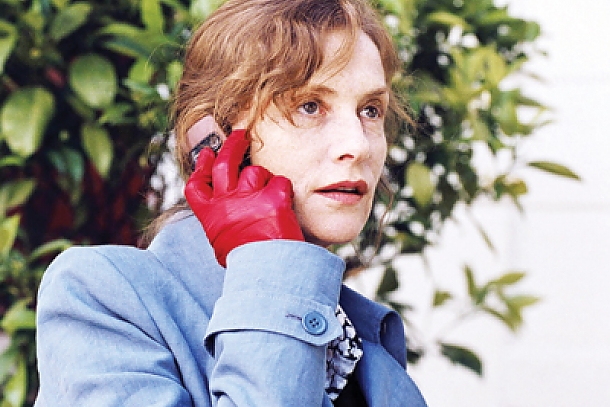 In the ensuing years, she would reunite with Haneke on "Time of the Wolf" (2003) and as the daughter of the elderly couple in "Amour" (2012), and would continue to work frequently on challenging material. Among the more notable films of this time were "8 Women" (2002), Francois Ozon's retro musical that brought together many of France's most noted actresses, "Ma Mere" (2004), a creepy psychodrama in which she plays a middle-aged woman who embarks on an incestuous affair with her son and the French-language version of "Fantastic Mr. Fox," in which she voiced the part of Mrs. Fox that Meryl Streep played in the English-language edition. There were a couple of additional excursions into American cinema as well. She was very funny in a supporting turn in David O. Russell's "I Heart Huckabees" (2004), she appeared as Jessica Chastain's mother in the various incarnations of "The Disappearance of Eleanor Rigby" (2014), and, in arguably the most baffling entry in her filmography, she turned up in "Dead Man Down" (2013) a banal revenge thriller that is only of interest because of the odd conglomeration of talent involved—it costarred Colin Farrell, Noomi Rapace and Terrence Howard, it was directed by Niels Arden Oplev, who previously made the original "The Girl with the Dragon Tattoo," and it was released under the auspices of the World Wrestling Entertainment banner. Finally, in a move so inevitable that it was a wonder it took so long to happen—especially considering the number of women directors she has worked with over the years—she teamed up with fellow French provocateur Catherine Breillat to make "Abuse of Weakness," a gripping recreation  of Breillat's own real-life experience in which she fell victim to a devastating stroke and, following a long and painful recovery, was then taken in by a charismatic con man who scanned her out of a huge sum of money.

Huppert is now entering her sixties, an age that tends to be notoriously difficult for even the most talented of actresses to navigate unless they are willing to play grandmothers or appear in life-affirming dramas involving people coming to terms with things. IMDb lists three new titles in various stage of production that sound intriguing—"The Sleeping Shepherd," "Louder than Bombs" and "Elle," the latter one scheduled to be directed by none other than Paul Verhoeven in a teaming that almost sounds too good to be true. The stage continues to beckon as well; earlier this year, she hit the boards in New York in a well-received production of Jean Genet's "The Maids" opposite Cate Blanchett. Who knows—maybe even the Oscar voters, who have thus far failed to give her so much as a single nomination to date—will finally see fit to giving her some long-overdue attention. Whatever she does—and it doesn't appear that she will be slowing down anytime soon—one can rest assured that the results, like the vast majority of her storied career, will almost certainly be worth watching, if only to revel in her talents.

The screenings for the 50th Chicago International Film Festival's tribute to Isabelle Huppert will take place at the Music Box theater. TIckets and passes can be purchased in person at the theater or the Festival Office (300 E. Adams, Suite 600), over the phone at (312)332-FILM or online at chicagofilmfestival.com For further information on the tribute, running times, ticket prices and availability and program changes, not to mention a full schedule of events, go to the festival site at chicagofilmfestival.com