Brian De Palma is one of the great seducers of the cinema, and he proves it with "Passion," a spellbinding thriller.

Joining his rapturous visual style to elements that have driven him to artistic peaks over the years—voyeurism, media manipulation,  compelling female characters, unexpected narrative twists —DePalma has made a film that simultaneously conveys the confident touch of a master and the energy of a newcomer eager to prove himself. The result is De Palma's most satisfying movie since 2002's "Femme Fatale."

"Passion" is set largely in the German office of an international P.R. firm where the trappings are as immaculate as the dealings are dirty. Rachel McAdams plays a rising executive, Christine. Noomi Rapace is her immediate subordinate, Isabelle. At first glance, they seem to have a harmonious working relationship. We learn otherwise when Isabelle devises a brilliant new ad campaign for a smartphone, but Christine winds up snaring the credit, and with it, the possibility of a much-desired promotion to the New York office.

At first, Isabelle seems oddly forgiving towards her boss, but when she learns that the home office is watering down her campaign out of fear that it's too raw and radical, she uploads her version to YouTube. The ad becomes an instant sensation, and suddenly it is is Isabelle who is being offered the New York promotion. After getting a taste of her own medicine and not liking it, Christine sets off on a exceptionally nasty course of revenge, trying to publicly and privately humiliate her rival.

If this storyline sounds a bit familiar, it may be because the film is a remake of the 2010 French thriller "Love Crime," which was directed by the late Alain Corneau and featured Kristin Scott Thomas and Ludivine Sagnier in the roles now played by McAdams and Rapace. De Palma has made a few small but significant changes that improve on the original and transform it into a full-blooded Brian De Palma film. One subtle but important change is making Christine and Isabelle closer in age than in Corneau's original. At first, this seems to make hash of the original's more overt boss-protege relationship, but it ultimately adds an intriguing new dimension. In DePalma's film, when the promise of the New York promotion is arbitrarily offered to both women by their distant superiors, it cannily suggests that women in that sort of corporate environment are seen as being largely interchangeable—and that Christine may have a point when she goes to extremes to stand out from the rest of the crowd, and destroy someone who is too much like her for comfort.

De Palma puts enough of a new spin on the proceedings to ensure that even those viewers who got around to seeing "Love Crime" will still have a few surprises in store, particularly in the final scenes. Some may object that these developments push the plot into the absurd, but they build to a finale that forces a reevaluation of everything that came before.

With the help of the significant contributions by cinematographer Jose Luis Alcaine, editor Francois Gedigier, and composer Pino Donaggio—whose score ranks with the best of his career—De Palma creates a dreamily hypnotic atmosphere. Reality and nightmare logic become indistinguishable thanks to oddball camera angles and off-kilter imagery (such as a creepily alluring mask that becomes a key motif). When everything comes together during the central sequence—a split-screen set-piece in which the intricate movements of a ballet scored to Debussy's "Afternoon of a Faun" are interspersed with activity of an equally choreographed nature—the result is so beautifully conceived and executed that it plays like a master class in the art of generating suspense.

De Palma has also sprinkled the proceedings with waggish references to some of his earlier cult classics. A new plot development could have come straight out of "Sisters," and the entire story, with its tale of a female power struggle that ends violently, is essentially an adult version of "Carrie" with the cruelties located in boardroom instead of the locker room. These additions give "Passion" an idiosyncratic personal touch that has become increasingly rare in movies these days, and that is one of DePalma's hallmarks. This is a film that was clearly made by an individual, not a committee, and it shows in every frame. 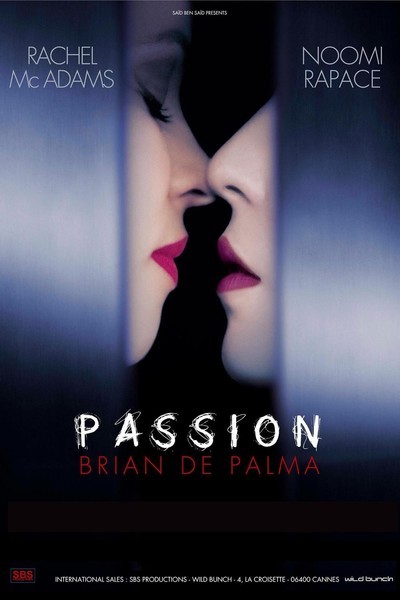