Back in 2004, Catherine Breillat, the French filmmaker and author responsible for such cinematic provocations as "Romance," "Fat Girl" and "Anatomy of Hell," suffered a massive cerebral hemorrhage that affected her entire left side. After five months of hospitalization and painful physical therapy, she recovered, and, in 2007, was able to resume her directorial career with the powerful period piece "The Last Mistress." That same year, she made the acquaintance of notorious con man Christophe Rocancourt when she contemplated casting him opposite model Naomi Campbell in a screen adaptation of her novel "Bad Love." That film would never be made, but over the next 18 months, Breillat charged, Rocancourt would take advantage of her diminished post-stroke capabilities by convincing her to give him a series of "loans" totaling over 800,000 euros. The courts would agree with Breillat, and, in 2012, Rocancourt would be put in prison for taking her money.

To be caught up in a situation like this would be an acute embarrassment for most people—especially those of a prominent position—and many of them would go to extreme lengths to keep as much of a lid on it as possible. Breillat, to put it simply, is not one of those people. In 2009, she wrote a book based on her experience, and, with her latest film, "Abuse of Weakness," she offers up a lightly fictionalized take on the ordeal. This is not the first time that Breillat has mined her own life and work for material—"Sex is Comedy," for example, was a film about a director struggling to shoot a graphic sex scene inspired by her own difficulties in putting together a similar sequence in "Fat Girl"—but this examination of power, greed, emotional manipulation and simple need is gripping and powerful to behold even if you don't know the story behind the story.

The film opens with acclaimed filmmaker Maud Schoenberg (Isabelle Huppert) waking up in the middle of the night to discover that she has no feeling in her left side before collapsing on the floor while trying to summon help. After that comes a wrenching series of scenes in which the once-proud Maud is forced to undergo countless gross physical impositions over the course of several months in order to learn how to walk, talk and even laugh again. Despite nearly a year of treatment and rehab, Maud's steely determination remains ("I've sunk like the Titanic. But if I ever resurface, I'll be like an atomic bomb") and she eventually begins planning a new film involving a sexualized power struggle between a rich and famous woman and the younger, poorer man that she becomes obsessed with, even after things between them become violent.

It is at this point that she wakes up in the middle of the night to see con man Vilko Piran (rapper Kool Shen, a portrait of magnetic insolence) being interviewed on television about his shady past—he brags about having bilked his victims out of more than $135 million—and is fascinated by his unrepentant demeanor. Against the advise of her friends, she decides to cast him in the lead role in her film and right from the start, he begins to insinuate himself in her life in weird ways—during his very first visit to her place, he literally begins climbing up her bookshelves in a move that looks like nothing so much as an animal marking its territory. She quickly falls under his spell and before long, he begins asking her for substantial loans—oh, he has more money than he knows what to do with but those creepy police make it impossible for him to touch it right now—which she bemusedly agrees to give him. Before long, she has given over virtually all of her money and is gradually forced to come to terms with the enormity of what she has done or been coerced into doing.

While watching "Abuse of Weakness," most moviegoers will no doubt be scratching their heads and wondering how a woman as obviously intelligent as Maud (and Breillat, by extension) could possibly fall for Vilko's machinations—right from the start, he is rude and abrasive, and the various stories that he spins in order to separate Maud from her money (including the idea that they co-author a book, a move that somehow requires her to give him a substantial "advance") are not exactly the stuff of "House of Games." A lesser and more reductive film would have come up with some pat explanation for her behavior and painted Maud as nothing more than an innocent victim. As Breillat knows all too well, there is no easy explanation for such actions, and, as the film progresses, she weaves a web of potential rationales—a certain degree of loneliness and isolation in the wake of her terrible ordeal, bemusement at the idea that her movie idea is playing out before her very eyes, the delusion that she can somehow out-manipulate such a master manipulator—and leaves the audience to understand for themselves how things turned out the way they did. She also makes the smart move of presenting Maud not simply as a helpless victim but as a smart and resourceful (despite her loss of faculties) woman whose ultimate predicament is in no small part of her doing.

And who better to portray the formidable but frail Maud than Isabelle Huppert, that most indomitable of French actresses in what is, amazingly enough, her first collaboration with Breillat. Having spent her illustrious career playing strong and sometimes manipulative women, she is the perfect choice for the role, and what she does here is extraordinary in the way that she conveys a woman whose outside sense of bravado is now required to mask physical and emotional vulnerabilities that she is not used to, and which she tries to compensate for in ultimately disastrous ways. She has three particular scenes here that are among the best that she has ever played—the opening sequence in which she suffers her hemorrhage in an agonizing but somehow understated manner, a moment towards the end where she watches Vilko lavish Christmas gifts on his wife and infant child while realizing that she has funded his largesse, and the powerful finale in which she attempts to explain to her incredulous family why she was compelled to give away virtually all her money to a known con man.

Those expecting the intense violence and/or transgressive sexuality of Breillat's earlier films may be disappointed at first to discover that "Abuse of Weakness" is comparatively tame in both departments. That said, this is a work just as startling and potent as anything she has done to date—a powerful example of art being used to exorcise personal demons that is anchored by two stunning performances and some of the most gripping moments to be seen in any film so far this year. 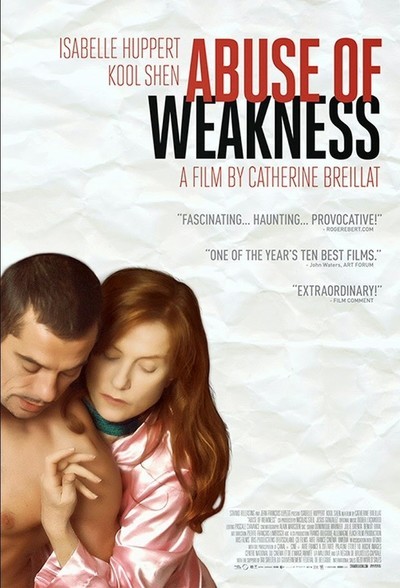