Roger Ebert December 24, 2011
Tweet
This is a free edited sample of the Christmas Newsletter.
For Roger's invitation to the Club, go here.
From the Grand Poobah and Mrs. Poobah:
Seasons Greetings Everyone! 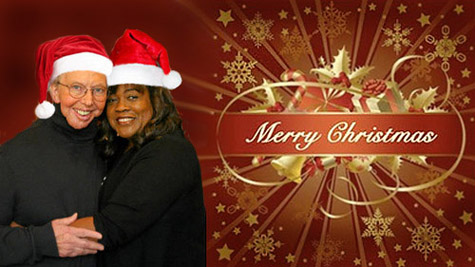 "Exactly a century before the film adaptation of J.R.R. Tolkein's The Lord of the Rings, W.R. Booth and R.W. Paul made this short film that used the full panoply of what were then state-of-the-art special effects to tell a traditional sword-and-sorcery romance. In The Magic Sword - A Mediaeval Mystery, a knight has to battle ghosts, ogres, shape-shifting witches and disembodied flying heads in order to win back his damsel - but, thanks to a magic sword bestowed on him by a good fairy, everything turns out happily." - BFI

Marie writes: Now that Christmas is almost here, I think we should celebrate what's really important. You know, the stuff we actually care about... 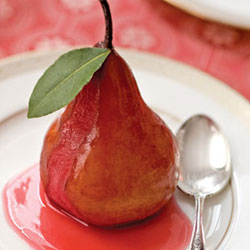 Ingredients4 Bosc or Bartlett pears1 bottle (750-ml) hearty red wine, such as Zinfandel1 cinnamon stickPeel of 1/2 orangePeel of 1/2 lemon2 bay leaves5 cardamom pods5 peppercorns3/4 cup sugar4 drops red food coloring (optional) Garnish: 4 bay leavesInstructions:1. Using a vegetable peeler, peel pears. Place pears in a medium saucepan, trimming bottoms if necessary to help pears stand up on their own.2. Add the wine, cinnamon stick, orange peel, lemon peel, bay leaves, cardamom pods, peppercorns, sugar - and food coloring, if using. Bring to a boil.3. Reduce heat, and simmer until pears are tender, 30 minutes to 1 hour, depending on ripeness.4. Remove pears from saucepan and set aside to cool. Bring cooking liquid to a boil, and cook until thickened, about 5 to 8 minutes. 5. Garnish each pear with a fresh bay leaf and serve with sauce. - Victoria Magazine.And for an eclectic mix of yummy desserts, visit Holiday Desserts from Around the World which feature recipes to make: Gingerbread Cake with Chocolate-Ginger Glaze, Spiced Krumkake, Panettone, Steamed Christmas Pudding, and Red Velvet Cake!

Jack The Giant Killer (2012) Directed by Byran Singer. Starring Nicholas Hoult, Stanley Tucci, Ian McShane, Bill Nighy, Eleanor Tomlinson and Ewan McGregor. Synopsis: "Jack the Giant Killer" tells the story of an ancient war that is reignited when a young farmhand unwittinglyopens a gateway between our world and a fearsome race of giants. Unleashed on the Earth for the first time in centuries, the giants strive to reclaim the land they once lost, forcing the young man, Jack, into the battle of his life to stop them. Fighting for a kingdom, its people, and the love of a brave princess, he comes face to face with the unstoppable warriors he thought only existed in legend--and gets the chance to become a legend himself. In theaters

Men in Black III (2012) Directed by Barry Sonnenfeld. Starring Will Smith, Tommy Lee Jones, Alice Eve and Josh Brolin. Synopsis: Agent J time-jumps back to the 1960s, where an alien with its sights on the younger version of Agent K poses a threat to the future of the MIB organization -- and humankind's very existence. In theaters May 25, 2012

MS One Maximum Security (2012) former title "Lock Out". Directed by James Mather, Stephen St. Leger. Starring Guy Pearce. Synopsis: A man wrongly convicted of conspiracy to commit espionage against the U.S. is offered his freedom if he can rescue the president's daughter from an outer space prison taken over by violent inmates. In theaters April 20, 2012

Perfect Sense (2011) Directed by David Mackenzie. Starring Ewan McGregor, Eva Green. Synopsis: A story about two people - a chef and an epidemiologist - who fall in love just as an epidemic begins to rob the world's population of their sensory perceptions. In theaters February 10, 2012

G.I. Joe: Retaliation (2012) Directed by Jon M. Chu. Starring Channing Tatum, Dwayne Johnson. Synopsis: The G.I. Joe team faces off against Zartan, his accomplices, and the world leaders he has under his influence. In theaters June 29, 2012

Rock of Ages (2012) Directed by Adam Shankman. Starring Julianne Hough, Diego Boneta. Synopsis: Set in 1987 Los Angeles, Drew and Sherrie are two young people chasing their dreams in the big city. When they meet, it's love at first sight, though. In theaters June 1, 2012

The Expendables 2 ( 2012) Directed by Simoin West. Starring Sylvester Stallone, Jason Statham, Jet Li, Dolph Lundgren, Chuck Norris, Terry Crews, Randy Couture, Liam Hemsworth, Jean Claude Van Damme, Bruce Willis, Arnold Schwarzenegger. Synopsis: The Expendables are back and this time it's personal. Barney Ross (Sylvester Stallone), Lee Christmas (Lee Statham), Yin Yang (Jet Li), Gunnar Jensen (Dolph Lundgren),Toll Road (Randy Couture) and Hale Caesar (Terry Crews) -- with newest members Billy the Kid (Liam Hemsworth) and Maggie (Yu Nan) aboard -- are reunited when Mr. Church (Bruce Willis) enlists the Expendables to take on a seemingly simple job. The task looks like an easy paycheck for Barney and his band of old-school mercenaries. But when things go wrong and one of their own is viciously killed, the Expendables are compelled to seek revenge in hostile territory where the odds are stacked against them. Hell-bent on payback, the crew cuts a swath of destruction through opposing forces, wreaking havoc and shutting down an unexpected threat in the nick of time -- six pounds of weapons-grade plutonium; enough to change the balance of power in the world. But that's nothing compared to the justice they serve against the villainous adversary who savagely murdered their brother. That is done the Expendables way. In theaters August 17, 2012

The Dictator (2012) Directed by Larry Charles. Starring Sacha Baron Cohen, Anna Faris. Synopsis: The heroic story of a dictator who risks his life to ensure that democracy would never come to the country he so lovingly oppressed. In theaters May 12, 2012

Salmon Fishing in the Yemen (2012) Directed by Lasse Hallström. Starring Ewan McGregor, Emily Blunt. Synopsis: A fisheries expert is approached by a consultant to help realize a sheik's vision of bringing the sport of fly-fishing to the desert and embark son an upstream journey of faith and fish to prove the impossible, possible. In Theaters March 2, 2012

The Dark Knight Rises (2012) Directed by Christopher Nolan. Starring Christian Bale, Tom Hardy, Michael Cane and Joseph Gordon-Levitt. Synopsis: Eight years after the events of The Dark Knight, the terrorist leader Bane arrives in Gotham City, pushing it and its police force to their limits, forcing its former hero Batman to resurface after taking the fall for Harvey Dent's crimes. In theaters July 20, 2012 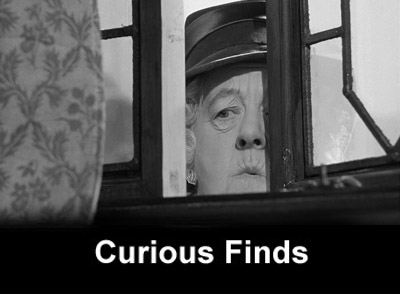 Marie writes: If I could have any toy for Christmas, any toy in thewhole wide world, I'd want an Iron Giant...."Superman"....sniffle. :-)
Then again, Aquariums can be fun - if you can find some whale sharks...Although not as fun as visiting Hogwarts in the UK!  OMG...!I love this Christmas video; note the reference to George Melies...

"With three more cases for BBC1's Sherlock to crack, we speak to the series' co-creators Steven Moffat and Mark Gatiss, and stars Benedict Cumberbatch and Martin Freeman." - Guardian 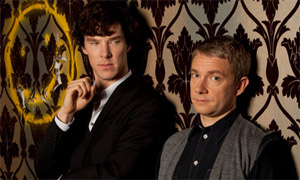 "The flat in 221b Baker Street is in a bit of a state. Home to Sherlock Holmes and his assistant Dr John Watson, the kitchen table is coated in the powdery remnants of some botched chemistry experiment, while a trail of yellowed newspaper clippings obscures much of the carpet. There's a human skull perched on the arm of the sofa, a bag of severed thumbs in the fridge, and a smiley face spray-painted on to the living room wall.Slumped in armchairs at the center of the room and seemingly oblivious to all this chaos are Sherlock creators Steven Moffat and Mark Gatiss. They've taken time out from shooting the second series of the hit BBC drama to have a chat with the Guardian about all things Holmes. Despite an arduous filming schedule, both look relaxed; Gatiss has reclined so far back into his chair that he is practically horizontal, while Moffat is recalling some of his favorite fan correspondence. "I got a tweet this morning where someone said, 'I so wanted to hate this but I couldn't.'" He shrugs: "It says more about the person, I think."It's indicative of what a successful fist the pair have made of dragging Arthur Conan Doyle's sleuth into the 21st century that grumblings from serial "Holmesophiles" - as Martin Freeman calls them - have been relatively scarce. Much of this has to do with the fact that Moffat and Gatiss are enormously knowledgeable about Conan Doyle's work, and their re-imagining incorporates big and small screen adaptations of Holmes as well as the original stories. As Gatiss puts it: "Everything is canonical." - by Gwilym Mumford. To read more visit "Sherlock returns to the BBC" at the Guardian. 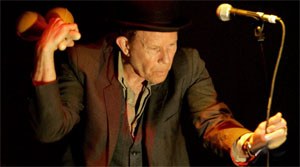 "Idiosyncratic singer Tom Waits has kept his fans waiting seven years for his new album, Bad as Me.For his latest studio album, the California-based singer has surrounded himself with a cast of musicians including Keith Richards, Charlie Musselwhite, David Hidalgo and Mark Ribot. Waits talked to Jian Ghomeshi, host of CBC's Q cultural affairs show, about his songwriting process and how his years in the music business have changed him." - Q Interview CBC. Listen to a free recording of the interview on the CBC.  The video "Satisified" directed by Jesse Dylan from the new record Bad As Me. CD on sale on now. Tom Waits Official website 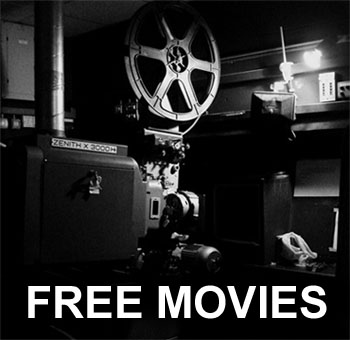 The Cat and the Canary (1927) American silent horror film adaptation of John Willard's 1922 black comedy play of the same name. Directed by German Expressionist filmmaker Paul Leni, the film stars Laura La Plante, Forrest Stanley and Creighton Hale. The plot revolves around the death of their uncle Cyrus West, and the reading of his will 20 years later. Annabelle inherits a fortune from her uncle, but when she and her family spend the night in his haunted mansion they're stalked by a mysterious figure. Meanwhile, a lunatic known as "the Cat" has escaped from an asylum and is hiding inside the mansion. Silent film, no sound.