From March 22nd through 26th, over 1,900 profs, grad students and independent scholars assembled to present over 1,200 20-minute papers. Q&A’s ensued. The lingo overlapped very little with what’s in the air after a fest screening. This crowd was into “interrogating texts.” Celebrities, not so much. I skipped the paper titled "Did She or Didn’t She?: Renée Zellweger and the Mediated Pedagogies of Surgical Selfhood.”

Logging 50+ hours at the 2017 SCMS conference in Chicago, I saw an astonishing array of perspectives. Researchers deployed a panoply of tools to interpret diverse reservoirs of data. Arcana ranged from projectionists’ letters to trade journals quarreling about changeover marks at the end of film reels, to the sound mix of faux-ambient birdsongs during golf tournament broadcasts.

Topical politics surfaced in talks about a Syrian cellphone videographer documenting a soldier shooting him. That raw imagery was uploaded to YouTube on August 20, 2011. Other panelists discoursed on the Jewishness of Bernie Sanders, the spinning of Ted Cruz’s insistence he’s a "Star Wars" fan, and campaign memes likening Hillary Clinton to Princess General Leia.

The films under study are indeed diverse. Not to mention the film-like things that are not traditional films. Patrick Clancy’s “peliculas”—a film installation from 1979—was restored and set up in a gallery at the Chicago Cultural Center during the conference, which was based at the nearby Fairmont Chicago, Millennium Park. Another specimen: Walter Ruttmann’s imageless 11-minute “blind film” or “cinema for the ears” from 1930.

Some 40 Caucuses and Scholarly Interest Groups met to network about shared interests. Rubrics included: Black, Class, Queer, Media Literacy and Pedagogical Outreach, Fan and Audience Studies, and Film and Media Festivals. Two of the 384 panels addressed film festivals. So did one of the 41 workshops. Artistic director Bryan Wendorf represented the Chicago Underground Film Festival. An advertiser this year was the Toronto International Film Festival. Next year’s meeting is slated for Toronto.

New York City was where a 1957 Conference on Motion Picture Education met at the Museum of Modern Art. Two years later the Society of Cinematologists was founded. The name changed to the Society for Cinema Studies in 1969. Since 1999, SCMS offices have been located at the University of Oklahoma in Norman.

This is the fourth time SCMS met in Chicago. In 1977 the site was nearby Evanston, Illinois, where Northwestern University is located. What was a three-page program back then is now 195 pages long and lists 29 Northwestern participants and 35 from the University of Chicago. DePaul University and the School of the Art Institute of Chicago each sent eight this year.

Like filmmakers entering a festival, academics pitch their topics for papers, panels and workshops—with better odds. SCMS program committee acceptance rates this year were 58%, 67% and 77%, respectively. Among the papers with intriguing titles: “‘Our Best Machines Are Made of Sunshine’: Magnetic Recording and the History of Consciousness”; "The Sound of Occupation: The Sound of the Invisible Airplane and the Image of Pregnant Women in Japanese Atomic Bomb Films”; and “`All We’ve Broken so Far Is a Vase in Ed Sullivan’s Living Room’: Technology, Domesticity, and ‘Authenticity’ in Edward R. Murrow’s Person to Person.”

Is there a common theory underlying all this? Not really, although there were seven panels—one was titled "That Thing Called `Theory'”—and three workshops so thematized. Ten panels used the term “genre.” That fixture of film talk turned up in ten papers in other panels. 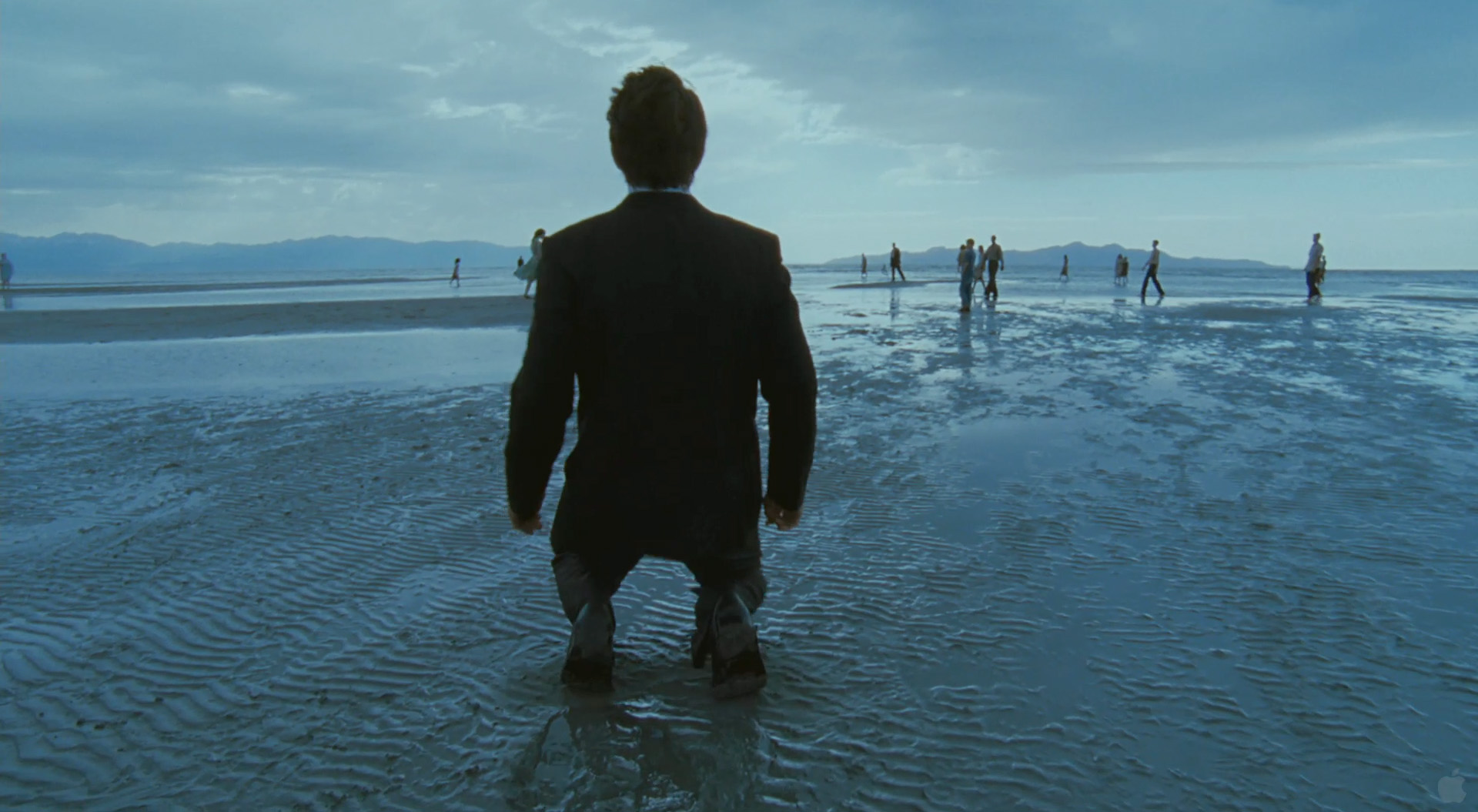 Seven panels sported the term “auteur.” One weighed M. Night Shyamalan’s “oeuvre.” Another looked at Robert Altman’s career. Individual papers focused on directors Richard Kelly and Spike Lee. An entire panel was devoted to “Dheepan,” a 2015 film directed by Jacques Audiard. Terrence Malick films were the focus of three separate scholars. Three papers regarded “The Lobster” (2015) from Yorgos Lanthimos. Two got “Under the Skin” (2013) by Jonathan Glazer. Appearing in the titles of different papers: “Hardcore Henry,” “The Handmaiden” and “Citizen Kane.”

Eight panels headlined Hollywood in their titles or subtitles, but it’s no longer a mainstay in the ship of cinema scholarship. Maybe feeling like an old school minority, some SCMS members felt the need to start a Classical Hollywood Scholarly Interest Group in 2015—“which suggests how much the ground has shifted,” notes Notre Dame prof Pamela Robertson Wojcik in an email. From her vantage as SCMS president-elect and program committee chair, she lists a few trends this year’s lineup: “More papers on sports media, video games, aesthetics and technology, adult film, festivals, African American representation and especially media and state violence, and labor.”

Film critics and reviewers figured in few papers. Positif editor Michel Cement put in an appearance. Letters from critic James Agee’s postwar readers in Time and The Nation inspired one paper. Another traced the rise of women writing on movies in 1910s newspapers, including the pseudonymous Mae Tinée in the Chicago Tribune.

The Chicago Board of Censors Chicago’s shortlived ban of the 1938 March of Time newsreel "Inside Nazi Germany” interested Steven Carr from Indiana University-Purdue University Fort Wayne. For the bigger picture, Steve Macek from North Central College in Naperville, Illinois considered Chicago screen censorship from 1907 to 1984.

Chicago informed presentations on pop concerts of video game music, virtual terrains of the city in games, and athletic scholarships for collegiate eSports gamers. There was a 50th anniversary look at Kartemquin Films. The “Medium Cool: Between Fiction and Documentary in Chicago, 1968” panel had two papers about the late Haskell Wexler, born and raised in Chicago.

The University of Chicago Press was among vendors exhibiting books on site. In a contemporary vein, I noticed Folklore, Horror Stories, and the Slender Man: The Development of an Internet Mythology at the Palgrave booth. Columbia University Press displayed When Movies Were Theater: Architecture, Exhibition, and the Evolution of American Film by William Paul, who once wrote film reviews for Rolling Stone and the Village Voice. Here he writes “a history of movies in the theater” to illuminate “our actual experience of what a movie is.”

At her talk Catherine Clepper at University of Washington, passed around a press booklet for “Scent of Mystery,” a 1960 film directed by Jack Cardiff. Producer Michael Todd, Jr. offhandedly promoted this piffle in 70mm with eight-track sound: “We are not being pretentious by claiming our process is going to advance the cause of culture by one iota, but we have spent a lot of money to make a classy presentation of something we think is `strange and unusual’ (my father’s pet phrase in describing what motion picture entertainment should be) and fun. We hope you agree.”

The 30 unique sensations in the mise-en-scene—from “The wonderful caress of fresh cool air” to “The heavy oriental incense of an ancient mosque"—were pumped through tubing to seat headrests. Todd held the world premiere at his Cinestage Theatre in Chicago on January 6, 1960. Chicago Tribune newspaper ads touted: “If You Never Smell Another Motion Picture In Your Life You Must Smell `Scent of Mystery.’” An obvious swipe at an ad for more serious fare on a competing loop screen: “If You Never See Another Motion Picture In Your Life You Must See Stanley Kramer’s Production of 'On the Beach.’”

What Parisians once heard in their theaters was excavated. What came before booing at the Cannes Film Festival? The custom goes back to “right to whistle” espoused in Le Figaro in 1886. In 1893 Le Monde diagrammed the whistling styles of theater-goers. A 1917 film critic lamented: “The French public too often forget to whistle and make known their opinion.” Fascist and anti-fascist outbursts in Paris cinemas in 1920s and 1930s were revisited via news accounts and police records. 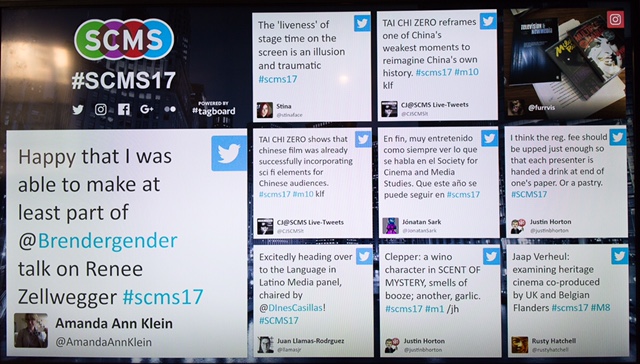 Michael Pigott, from the University of Warwick, adopts dual roles as ethnographer and preservationist by recording soundscapes inside 35mm projection booths during screenings. He is also working on a four-year oral history with pre-digital projectionists. He played an audio actuality labeled “Frank Gibson making a splice on the rewind bench.”

Two presenters shared research on a new kind of screening in China and Japan. As a feature plays on the screen, the audience texts a live stream of commentary about others sitting in the theater, as well as what’s legible. Dating from 2014, this phenomenon is called danmaku in Japanese and danmu in Chinese, which were translated as “barrage subtitles” or “bullet curtain.”

Curious in a sociological sense, these big screen social media events are unlikely sites for serious insight into cinema. Better luck online, suggests Sight and Sound editor-in-chief Nick James in Film Criticism in the Digital Age, an anthology from Rutgers University Press. In 2008 James wrote: “Bloggers have the advantage over print film reviewers in really free speech: they have no professional responsibilities, or policy interventions to deal with. They can write at any length and access historical material that once was restricted to library collections. The web offers an opportunity for another golden age of film criticism.”

That’s where young SCMS scholars may find an outlet, if not an income. “In terms of PhDs, unfortunately, the job market is still very tough,” observed Wojcik. “When there are jobs, they are most often in new media rather than film. At the same time, a few book editors told me they had record numbers of meeting this year, many with young scholars, and that the book proposals were terrific. So, the talent is there.”

Allusively deep titles already in print include: Artificial Darkness, History of a Shiver, The Internet Unconscious, Thinking in the Dark and Unthought. On a more downscale note, a flyer circulated to solicit contributors for a proposed book called Trash TV: Reality TV’s Obsession with Rags to Riches in Junk Professions that will ask: “Can trash TV engage viewers to question the worlds they live in and the choices they make?”

One paper this year partly answered that: “American Idol: Reality TV and Candidate Trump” by June Deery, who wrote Consuming Reality: The Commercialization of Factual Entertainment and teaches at Rensselaer Polytechnic Institute. Next year in Toronto, I bet more of SCMS’s 3025 members from 46 countries will theorize on Trump his tweets and his TV-watching—barring passport issues for U.S. scholars.