Presented almost entirely from the first-person perspective of the title hero, "Hardcore Henry" is a sensational, feature-length beat-'em-up. Henry, a robotically-enhanced amnesiac who fights a group of mercenaries who have kidnapped Henry's wife Estelle (Haley Bennett), finds various inventive uses for bricks, knives, grenades, and many guns. But do we really need to experience his kinetic adventures in blood-soaked bad taste from his alienating first-person perspective? Short answer: not really, but so what? "Hardcore Henry" is like a good roller-coaster in that it does not require a complex reason to be: it's there, it's fun, you ride it, and that's about it.

Over-the-top-ness is what draws you into "Hardcore Henry," a film that can be described as a cross between the "Call of Duty" first-person shooter video games, and hyper-violent, semi-satirical action movies like "RoboCop" and "Crank." The film lives and dies based on its abilities to disorient, shock, and generally undermine your sense of stability. So: soon after he is awoken and quickly debriefed by Estelle, Henry is chased out of an airborne laboratory by evil albino businessman Akan (Danila Kozlovsky), an ultra-powerful mob boss with the ability to move things with his mind. Henry, a cyborg with a robotic right arm and right leg, then runs around Moscow with the help of Jimmy ("District 9" star Sharlto Copley), a mysterious benefactor who appears through the guise of various clones of himself. Henry's mission is always simple: track down allies and supplies using a cell phone with a GPS, and kick scads of butt along the way.

Now, you could argue that "Hardcore Henry" does not go far enough over-the-top to be a truly great midnight movie, something you watch with your friends whenever your mind is most receptive to dark, trippy, and/or flat-out bizarre ideas. For example, much of the film concerns the simultaneous homogenization and privatization of contemporary Russian security, linking Akan's all-black mercenary stormtroopers with other private sector employees—naked, blonde-wig-wearing prostitutes. Likewise, a third-act twist implicates viewers for wanting to believe something about Henry that is patently untrue/irrelevant. But again, not enough is made of this revelation.

More importantly: while the action choreography is impressively bombastic, it's also not very good. The film's action scenes are like mediocre musical compositions, sporadically punched up by a boisterous, ever-mutating chorus. When Henry moves around, his running, kicking, and punching often feels like uninspired build-up for the next splashy murder. It's telling that, in a later scene, Queen's "Don't Stop Me Now" starts playing when Henry takes on an army of Akan's men. By this point in the film, the audience, like Henry, may be ready to check out. But then Freddie Mercury starts singing about how he's having a good time, and he doesn't want to stop at all. Henry then jams two syringes full of adrenaline into his thighs. And the scene takes off, lurching around without reason or grace beyond a blind imperative to get from one cool-looking kill to the next. If nothing else, this scene proves that the makers of "Hardcore Henry" know exactly what type of film they made.

After all, who would ever cast character actor Sharlto Copley in multiple parts? His line readings are wildly uneven here, his emotional range non-existent, and he tends to over-emphasize every other line (and never in an intuitive way). Then again, the amateurishness of Copley's performance is what makes him such a fascinating screen presence: he steals almost every scene he's in because you never know what he's going to do. He's like a young Christopher Walken, though Walken was always a strong screen presence and performer. Still, there's a lot of Copley in "Hardcore Henry" since Jimmy plays Henry's guide to a video-game-like world of senseless violence.

Ultimately, there's no time or reason to question what motivates actions in "Hardcore Henry," not when almost every scene boils down to action verbs: running, jumping, stabbing, etc. I'm not sure "Hardcore Henry" should exist, but if you pack a Dramamine, and surrender to its pummeling embrace, you'll probably enjoy yourself. 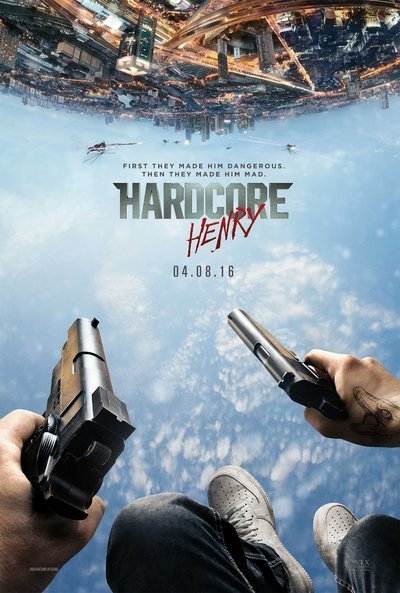 Rated R for non-stop bloody brutal violence and mayhem, language throughout, sexual content/nudity and drug use.