Park Chan-Wook’s “The Handmaiden” is a love story, revenge thriller and puzzle film set in Japanese-occupied Korea in the 1930s. It is voluptuously beautiful, frankly sexual, occasionally perverse and horrifically violent. At times its very existence feels inexplicable. And yet all of its disparate pieces are assembled with such care, and the characters written and acted with such psychological acuity, that you rarely feel as if the writer-director is rubbing the audience’s nose in excess of one kind or another. This is a film made by an artist at the peak of his powers: Park, a South Korean director who started out as a critic, has many great or near-great genre films, including “Oldboy,” “Sympathy for Mr. Vengeance,” “Lady Vengeance” and “Thirst,” but this one is so intricate yet light-footed that it feels like the summation of his career to date.

It’s also as inspiring an example of East-West cross-pollination as cinema has given us, on par with Akira Kurosawa’s adaptations of Shakespeare, Dostoevsky and Dashiell Hammett in its ability to submerge a respected source while keeping its outlines visible. The plot faintly evokes many Gothic thrillers (chiefly "Rebecca," "Jane Eyre" and "Gaslight") and quite a few examples of film noir as well; Park’s source is Sarah Waters’ Fingersmith, a 2002 novel set in Dickensian England that was previously made as a 2005 British miniseries. The result seems at once specifically English, specifically Korean and not of this astral plane; like Park’s best work, it’s an expressionistic, at times surreal movie that skates along the knife-edge of dreams. Every frame pulses with life, sometimes with blood.

The script tells of a spirited female pickpocket named Sooki, actually named Tamako ( Kim Tae-ri), who gets a job as a handmaiden at the estate of a rich old book collector (Lee Yong-nyeo), serving him and Lady Hideko (Kim Min-hee), the niece of his late wife; she gets pulled into a scheme by a fake count who wants to marry the niece and have her committed to an asylum so that he can claim her fortune; the book collector, the fake count’s mentor, has more or less the same plan in mind. “Frankly, I’m not that interested in money itself,” says the fake count, who was raised by a Korean fisherman but claims to be Japanese and calls himself Fujiwara (Ha Jung-woo). “What I desire is—how shall I put it?—the manner of ordering wine without looking at the price.”

The plan is fiendishly complicated, but it grows thornier still when Sooki/Tamako starts falling in love with her target. Their blossoming affair is tenderly observed—a startlingly blunt sex scene is delayed until fairly deep into the film, and preceded by many scenes that pivot upon subtle glances, overheard remarks, and moments where one woman rushes to the other’s defense. The fake count is handsome and can be dashing at times—Ha looks so at home in a tuxedo that you could imagine him wearing it to a supermarket—but he’s also pig who seems to revel in his piggishness, and his intended target sees through him immediately. When he calls her “mesmerizing” over a tense dinner, she replies, “Men use the word ‘mesmerizing’ when they wish to touch a lady’s breasts.” He’s upfront about his utter cyncism and lack of affection for Lady Hideko, a crushed flower of a woman who was raised from girlhood as a virtual prisoner by the book collector after—well, let’s just call it a tragedy, because now we’re at the point in this review where describing any specific moment or scene from “The Handmaiden” in detail would rob readers of one of the great pleasures of watching a densely plotted, elegantly executed motion picture: having no idea of what’s about to happen next, yet nearly always being surprised and enthralled by both the twist itself and the film’s presentation of it.

So here we go, somewhat vaguely, into the breach: nothing is what it seems in this movie, and the things that aren’t what they seem aren’t quite what they don’t seem to be, if that makes any sense at all (and if it doesn’t right now, trust me: it will). Most of the story takes place in and around the book collector’s country estate, a splendidly realized creation that’s not just one of the great mansions in film history—rivaled in recent movies only by the estate in another modern Gothic romance, “Crimson Peak”—but also an organizing metaphor for the whole film. It seems to change size and shape depending on a visitor’s angle of approach, and once you’re inside it, the geography at first seems so clear that you could draw floor plans of its most frequently used spaces; but after a few more scenes, you realize that you only saw a small part of the house, and not only are there rooms and wings you’ve never laid eyes on, there are secret doors and hidden passageways that only certain characters know about, leading to places where they can go to make love, commit sadistic acts of violence, or spy on each other. Soon enough, the movie teaches you how to watch it, and you start asking questions, like, “What does this person truly hope to gain from sneaking here, doing this, stealing that?” and “Are they really spying in secret, or do the spied-upon people know somebody is watching?" and “Are the emotions being expressed by that character real, or are they faking it, or are they seeming to fake it while actually feeling those feelings?”

A good many moments resonate not because of what one character is saying, but because of the looks on other characters’ faces as they hear their words and either contemplate their true meaning or visualize images to accompany them. One of many show-stopping setpieces is a reading of perverse erotica from the book collector’s library, accompanied by one of the weirdest sex shows in mainstream cinema, but most of the sequence’s eerie power derives from observing the rapt expressions of men who’ve gathered to hear explicit fiction read aloud. Nearly as powerful, though far subtler, are the cross-cut sequences that feel like self-contained short stories of their own. Dialogue or recited scraps of letters or fiction become de facto narration laid over a cascade of images, brilliantly composed for a very wide frame by Chung Chung-hoon, and backed by Cho Young-wuk’s hypnotically repetitive yet rapturously melodramatic score, which rises to operatic heights when the characters are experiencing misery, ecstasy or fear.

Park’s sense of texture and color seems as intuitive as a painter’s, but the film’s narrative construction is as right-brained as Christopher Nolan at his wonkiest. "The Handmaiden" is neatly diced into thirds, each approximately 45 minutes long, each narrated by a different major character with parenthetical mini-narratives embedded within each, Russian nesting doll-style. As you ease into the middle third, you start to see moments and images revisited from different angles, seen or heard from fresh vantage points, or picked up slightly earlier or slightly later, altering their meaning or revealing previously withheld facts. The result is a rare film that could be equally well-represented by a billboard-sized collage of randomly chose still-frames, and a flowchart. “Even listening to the same story, people imagine different things,” a character warns us, so deep into the movie that the line plays not like a revelation, but a confirmation of what we we’ve been feeling in our marrow.

As you might have deduced, “The Handmaiden” is a story that is also about storytelling, and writing, and picture making, and the obsessive-compulsive attention to detail that links so many great artists throughout history, regardless of medium, worldview or temperament. The movie is filled with literal and figurative nods to the act of artistic creation, from the loving close-ups of the book collector’s treasured volumes, the drawings and paintings made by Hideko and the fake count (he was originally hired to tutor her), and the shots of calligraphic sentences scratched onto letters and scrolls, to the way that blood spilled by lovemaking or disfigurement blooms upon mattresses and stone floors, rhyming with the lotus blossoms glimpsed in trees over the characters' heads, the eruptions of green that accompany transitions from indoors to outdoors, extreme closeups of voyeurs' eyeballs, and shots of a full moon so bright that it seems to be burning a hole through the clouds.

These touches are all striking in their own right. But they never feel ostentatiously disconnected from the story and characters. “The Handmaiden” is about a lot of things, among them trust and vulnerability, imprisonment and freedom, and the tension between the authentic self and the façade that individuals create, and that society imposes from without. Park never loses track of these ideas or forgets about them, but they never expressed in tediously rhetorical terms—always in a gliding, playful, often audaciously musical way. "The Handmaiden" stirs the senses by appealing to our gut feelings, our sense of morals and ethics, and our appreciation for the sight of great artists making magic as if it’s the easiest thing in the world. 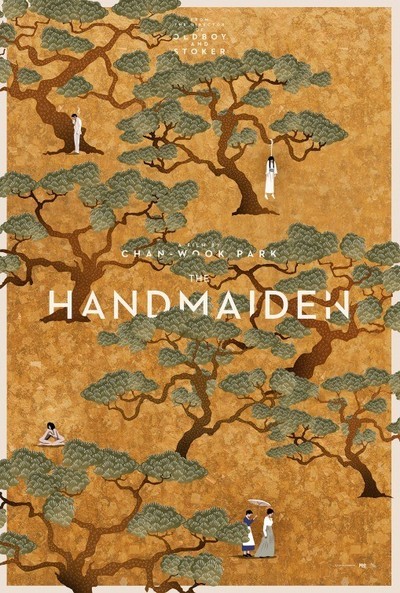 The Unloved, Part 84: Reign of Fire

Short Films in Focus: If Anything Happens I Love You