"Dheepan," the controversial 2015 Palme d'Or winner, was written and directed by Jacques Audiard, whose films often focus on the forgotten and marginalized, the criminal, the displaced, characters who try to move out of a permanent underclass into the alienating mainstream of French life. In "The Beat That My Heart Skipped," "A Prophet" "Rust and Bone" and now "Dheepan," the characters come from violent backgrounds, where they have done horrible things, and the plots involve searing acts of redemption or salvation. These films are akin to a phoenix rising from an inferno of destruction.

"Dheepan," featuring two extraordinary central performances, starts in the chaos of civil war in Sri Lanka and moves to another kind of chaos in a housing project in Le Pré-Saint-Gervais. When the film focuses on the everyday life of the makeshift family at its center, it is compelling and thought-provoking. "Dheepan" derails in its final sequences, becoming a revenge-thriller, and it's a disappointment. Overall, though, "Dheepan" is finely-drawn, beautifully shot and acted, featuring complex characters doing their best in no-win situations.

The film opens in a refugee camp in Sri Lanka, with people hustling in a panic to get out of the country. A man, a woman, and an orphan child pose as a family (using three passports found on dead bodies) in order to get tickets on the boat that will take them to a plane that will then take them to France. Sivadhasan (Jesuthasan Antonythasan), pretending to be "Dheepan" (the name on the passport) Yalini (Kalieaswari Srinivasan), and the child Illayaal (Claudine Vinasithamby) huddle on the getaway boat with the other refugees. The three do not know one another, but their fates are now tied together. They are father, mother, and child in the eyes of the world and the lie must be maintained. It is the only thing that will save them.

Once in France, intense disorientation ensues and this is where Audiard and his two main actors shine. "Dheepan" really lays out what it feels like, when already traumatized, to be thrust from the familiar into a newly traumatic situation, where people rattle off important information at you in a language you don't understand. Yalini and Dheepan spend a lot of time smiling and nodding as they are told what to do. Not knowing French isolates Dheepan and Yalini, although Illayaal, the child, knows a little French, and does her best to translate for her fake parents. The first hour of the film shows the struggle to just get through the day, never mind deal with ghosts from the past, or the fact that they are not, in fact, a family at all.

Dheepan gets the dauntingly enormous job as "caretaker" of a big housing project in Le Pré, overrun with drug dealers running their operation out of one of the buildings in broad daylight. He is told to ignore the "thugs," work around them, pass on by. Illayaal is enrolled in school. Illayaal does amazingly well, all things considered (and young Vinasithamby is terrific in a challenging role). Dheepan and Yalini share space warily, and their initial conversations are made up of Information Only topics: cooking, jobs, money. Yalini yearns to escape to a cousin who lives in England. She keeps one eye on the door, feeling no responsibility for Illayaal or anything else. She gets a job cleaning the apartment of an invalid man in the drug-dealer building, where the pitch-black stairway is like a descent into Dante's Inferno, glimpses of "thugs" passing by, frothing pitbulls struggling against the leash. Her job for the old man is quiet enough at first, and she finds herself drawn to Brahmin (Vincent Rottiers, in a frightening and charming performance), a young drug lord with an electronic tag on his ankle and chilly blue eyes. There is one extraordinary scene where he and Yalini have a complete conversation, in two different languages, not understanding one word the other says, but somehow an energy-charge passes between them. The situation shivers with the draw of danger, and the scene is pure Audiard territory.

Jesuthasan Antonythasan, a marvelous actor, is in many respects acting out his own life story. He joined the Liberation Tigers of Tamil Eelam (LTTE), a terrorist group warring for Tamil rights against the Sri Lanka government. Antonythasan left the group at 19, fleeing their clutches, before finally ending up in France (via Hong Kong, Malaysia, Bangkok). Dheepan is first seen covering a pile of burning bodies with palm leaves, but it is some time before it is revealed he fought with the Tamil Tigers. Later in the film, the talons of the group reach out for him in France. Perhaps there is guilt at what he had done while a part of the group, the innocents he may have killed. Perhaps there is grief at what he lost, although the details are fuzzy. While it would have been helpful to know whatever is in Dheepan's rear view mirror back in Sri Lanka, Antonythasan's face is beautifully eloquent and expressive: his whole life is there. Dheepan is a character actor's role but Antonythasan is a natural leading man.

There are great scenes throughout between Antonythasan and Srinivasan: the characters submit to their pretense uneasily, take care of their new charge, argue, soften towards one another. Their scenes have a fresh intensity, with sudden soft moments, like Yalini telling Dheepan that he needs to develop a sense of humor. It's as though they are handcuffed to each other and have to try, at least, to get along. Did Dheepan have a family of his own? He seems used to close proximity, whereas Yalini is uncomfortable. He and Yalini fight over her desire to pick up stakes; he feels responsible for the child. Dheepan keeps his head down as the drug wars heat up in the vast unkempt space between the housing project buildings. The innocent residents cower in their dark apartments.

And then "Dheepan" turns into a shoot-'em-up thriller and while there is something satisfying in that, after watching scene after scene where Dheepan and Yalini are underestimated or ignored merely because they can't speak French, the finale hails from another movie entirely. There's a great scene in "Rust and Bone" when Marion Cotillard's former party-girl Stéphanie suddenly finds herself in charge of an illegal wrestling organization, where she is the only woman present, and has to count up bets and pay people off. The sequence is filmed in slo-mo to the accompaniment of Bruce Springsteen's grinding "State Trooper," and it's frightening, subversive, and sexy as hell. Crime has released her, she steps into her own power. Something similar happens in "Dheepan" but it feels less motivated and it is less humorous and absurd (part of why the sequence in "Rust and Bone" is so great). If we hadn't spent an hour and a half getting to know Dheepan and Yalini, watching them interact with each other and with "outsiders," if we hadn't been so immersed in their steep learning-curve in a new culture, the ending wouldn't jar. "Dheepan" is well worth seeing, in spite of that. See it for the performances. There you will find the whole story. 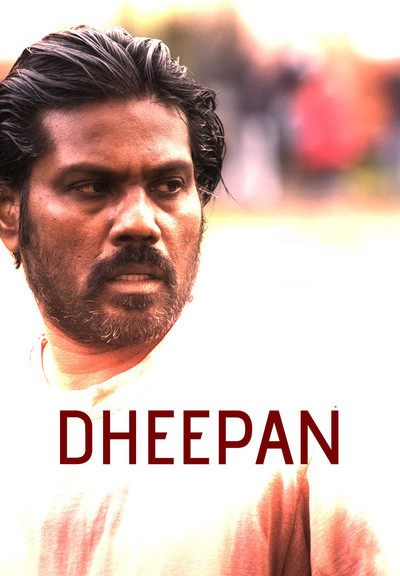