Official Synopsis: Styles of filmmaking have changed greatly from the classical Hollywood system, with its emphasis on narrative and character, to the current digital era of YouTube and installation art, where audiovisual spectacle takes command. The ways in which film critics and scholars have analysed these transformations in film style have also often changed. This book explores two central style concepts from the history of audiovisual criticism and theory, mise en scène and dispositif, to illuminate a wide range of film and new media examples. It argues that we need an open, inclusive and truly international approach to understand anew both old and current film and media works.

One afternoon, when I was 15 years old – a precocious cinephile – I saw Otto Preminger’s "Anatomy of a Murder" (1959) for the first time, on a humble, domestic, black-and-white television set. Although Preminger was already a name on the lists (compiled from the standard coffee-table guide books of the era) of filmmakers and films I had convinced myself I needed to catch up with, I had no real notion, back then, of the kinds of intense cults of cinephilic adoration, situated all over the world at diverse moments of film criticism’s history, that had been (and were still to be) inspired by his work from the 1940s through the 1960s.

But I shall never forget the emotion that I experienced that day – and on every subsequent viewing – when confronted with a particular moment about 90 minutes into this great film. It was a moment of initiation for me – initiation into the mystique or cult of cinephilia. And that is a cult intimately connected with a certain apprehension of mise en scène.

The moment in question is part of a courtroom scene in which the lawyer Biegler (James Stewart) manages to finally introduce evidence of a rape into his defense of a soldier (Ben Gazzara). A scene of dynamic theatricality: both prosecution attorney Lodwick (Brooks West) and Biegler play to the crowd (the jury) in their very different ways. 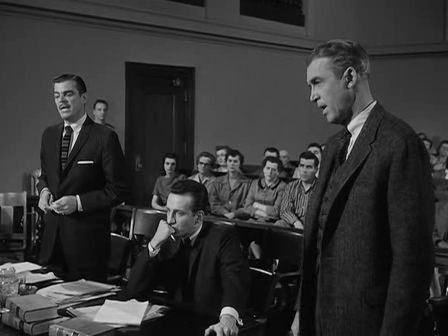 Preminger, who began his career as director in theater, likes to play out scenes in what dramaturgs refer to as steps or beats, which break up, structure, and mark out the stages of an event. Even more intricately, Preminger lays out, in a wide-angle, one-minute take, the back-and-forth of the tussle of power and persuasion between these two, clever men. First, Lodwick speaks while Biegler sits; 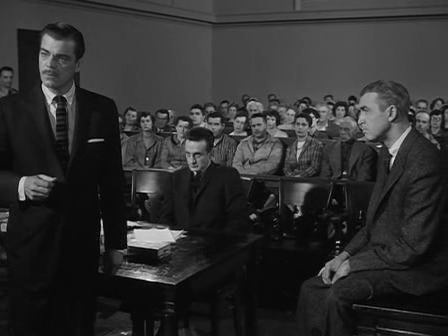 then the latter quickly stands up and draws level with his opponent in order to deliver a monologue before Judge Weaver (Joseph N. Welch). 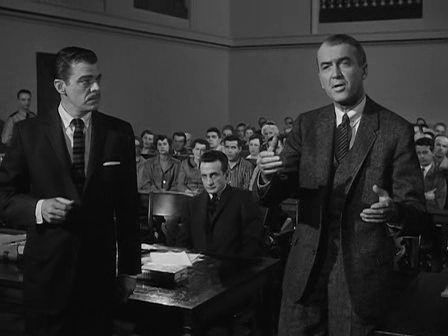 He inches closer to Weaver – and to the camera – as the intensity of his speech builds, ending with the line ‘I beg the court …’; 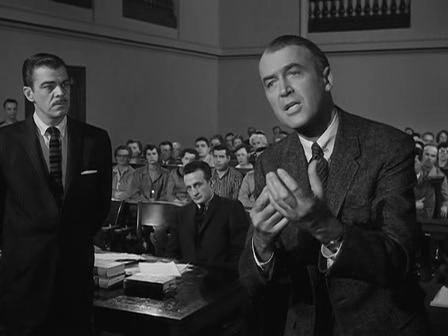 then he takes another step – now positioned quite close to the camera – and lowers his voice into a dramatic whisper to repeat, ‘I beg the court … to let me cut into the apple.’ 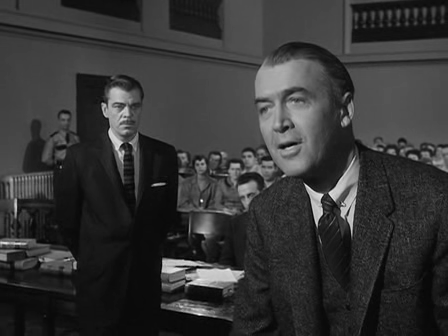 This is an instance where scripted dialogue (by Wendell Mayes) and its delivery are an absolutely integral, superbly timed part of the mise en scène thrill. The Judge deliberates for a few agonizing shots and seconds, winding his watch as he thinks, 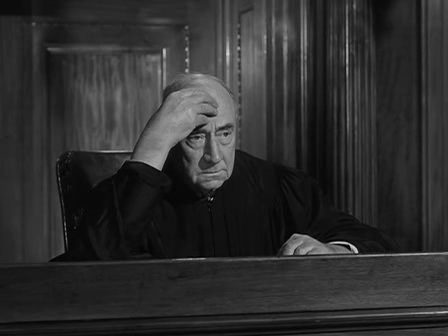 and then the tension breaks; 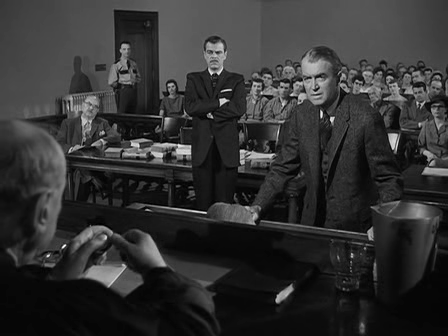 the trial can continue along this new line. 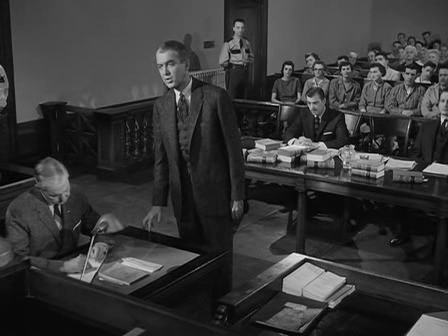 In the parlance of screenwriters, the film has just reached a turning point, and swung itself up to a new level of intrigue.

How to explain the tearful euphoria that this moment unfailingly produces in me – and in so many faithful, multi-time viewers of "Anatomy of a Murder" – beyond the elementary fact that it signals an important breakthrough in the story? The effects of Preminger’s mise en scène – and, indeed, of an entire era and ethos of mise en scène criticism – are caught in Brian Henderson’s description of a similarly staged scene in Orson Welles’s "Chimes at Midnight" (1966): ‘a sequence of actions and movements’, he writes, detailing the ever-changing relationship between the actors and the camera within long-held shots, ‘in turn realizes a delicate and precise sequence of emotions’ (Henderson, 1980, p.61). This is the process that critics of the 1950s gave an even more condensed formulation: mise en scène as the movement of bodies in space – a space constantly defined and redefined by the camera.

In the same, Preminger-like spirit, when the Italian director Sergio Leone died in 1989, his one-time screenwriter Bernardo Bertolucci handily summed up an entire era of cinema – as well as critics’s favourite way of speaking about it – by offering the following evocation of what mise en scène entailed: ‘the relationship between the camera, the bodies of the people in front of it, and the landscape’ (Bertolucci, 1989, p.78) – and, although he was thinking primarily of the rocky deserts in Leone’s Westerns, let us take the liberty of conceiving landscape, more inclusively, as environment to take in built as well as natural settings.

Bertolucci encapsulated here the classical, time-honored way we imagine that mise en scène happens in practice: in a set or on location, the director sizes everything up, guides actors into their spots, finds a position for the camera (or a ‘zone’ for it, if there is to be movement) … and after various trials and amendments, voila!, it happens: movie magic – the kind of magic incarnated by James Stewart for Preminger when he leans forward, close to the camera, and whispers about that metaphoric apple. A chemistry of bodies and spaces, gestures and movements caught on film, irrefutably, no matter what was in the script beforehand, or whatever is to happen in the editing and soundtrack rooms later.

And this magic did happen, often. Before the films of Kenji Mizoguchi or Jean Renoir, Preminger or Orson Welles, Nicholas Ray or Satyajit Ray – or, indeed, Bertolucci – cinephiles rightly gasp at the expressive eloquence and power of that three-point relation of camera-actor-environment as it clicks into place with precision. Alexandre Astruc once evoked the process in this way: mise en scène is ‘a way of extending states of mind into movements of the body’ (Astruc, 1985, p.267).

This is, on many levels, what I describe as a classical vision of mise en scène, what it is and how it works. And also something of a nostalgic vision, given that it tends to enshrine a particular period of cinema (roughly from the mid 1920s through to the mid 1960s) as the greatest period of filmic art and craft – judging later developments in film style as decadent aberrations or signs of a sloppy decline in standards. The directors’s names I have listed above encapsulate not just a critical agenda, but also a certain taste in film.

Raymond Bellour (2000) looks back upon this classical vision of mise en scène – which he predominantly associates with a founding father of the notion, Astruc – as a precise, particular culture, an ideal, dream or ‘cause’ born of a certain time and place (in his account, France of the 1940s and 1950s). He describes this culture as corresponding ‘to both an age and a vision of cinema, a certain kind of belief in the story and the shot’ (Bellour, 2003, p.29). Its rituals (viewing, writing, editing and publishing magazines or books, collecting stills, posters, and soundtrack albums) tend to make a considered fetish of particular portions of world cinema – classical Hollywood, Japan in the 1950s, French cinema of the 1930s (especially by Renoir) among them – and quietly exclude the rest of global film history. We can see the ledger of this 1950s taste preserved in aspic, as it were, in the clips chosen and reworked by Jean-Luc Godard in his monumental Histoire(s) du cinéma series (1988-1998).

The orientation of this brand of mise en scène criticism, furthermore, is overwhelmingly towards fiction – with the particular ‘belief in the story’ or investment in the fictional world it allows; documentary, animation and experimental film – to name only the three most glaring absences – rarely got much of a look-in at Cahiers (some notable, exceptional articles aside) during the 1950s and well into the 1960s. Why not? The answer is simple: they did not match the lineaments of this particular dream-vision of what cinema was, what it did best.

Bellour even gives the very name of mise en scène a tweak. With a certain smile, he calls this nostalgic film culture la-mise-en-scène (‘the’ mise en scène), so as to distinguish it from other, potential conceptualizations of the term as a theory or method. But la-mise-en-scène is at once a circumscribed piece of cultural history, and a way of looking – and of making – that persists into our present day. There have been, and continue to be, many fine, sensitive commentaries by fans and scholars who have devoted their life to this particular cause of classical mise en scène – indeed, it has somewhat returned to a position of intellectual favour today, for some very good reasons, after having been eclipsed for several decades (for examples, see Elsaesser and Buckland, 2002; Klevan, 2005; Keathley, 2011).

The classical conception of mise en scène is important not only because it has given birth to both marvellous, poetic films and impassioned, precise criticism, but because it still exists in contemporary cinema. It may not be the dominant style of our current period, but it is still available, at any moment, to any filmmaker, as a tradition, as a set of resources or strategies. We see la-mise-en scène, often in strikingly unadulterated forms, in works by Stanley Kwan ("Rouge," 1988), Todd Haynes ("Far From Heaven," 2002, a homage to Douglas Sirk), Terence Davies ("The House of Mirth," 2000), Christian Petzold ("Jerichow," 2008) and many others.

In this sense, mise en scène is not – and is never likely to be – entirely dead. Any filmmaker, in any audiovisual medium that allows the three-point interplay of body, space and environment, can still produce a moment as intense and effective as Preminger did in "Anatomy of a Murder."

Raymond Bellour, ‘Movie Mutations: Letters from (and to) Some Children of 1960’, in Jonathan Rosenbaum and Adrian Martin (eds), Movie Mutations: The Changing Face of World Cinephilia (London: British Film Institute, 2003).

Bernardo Bertolucci, ‘Once Upon a Time in Italy’, Film Comment (July-August 1989).