Saturday, May 4, was one month to the day that Roger left this earthly plane. In honor of Kentucky Derby weekend I am posting this photo of Roger and I proudly sporting our hats at Churchill Downs. There have been several photos of us wearing hats over the years. For some reason hats delighted us to no end. And Roger was particularly fond of some of the more outrageous hats we wore.  That day while we were watching the races we were so pleased that we could wear our hats both in doors and out. You can’t wear a hat in a movie theater.

Advertisement
Recently as I resumed my Friday ritual of reading movie reviews in print and online it hit me hard—I miss Roger’s reviews!  What would he think of the new "Iron Man 3"?  Would he be amused by Robert Downey Jr’s character’s  post traumatic stress crisis? Did he get a chance to see Richard Linklater’s “Before Midnight”?  I remember how “Before Sunrise” prompted us to take a trip to Vienna. He would want to know how this couple has fared before sunrise and after sunset. Whether the years have softened their love or allowed them to keep having those passionate conversations. 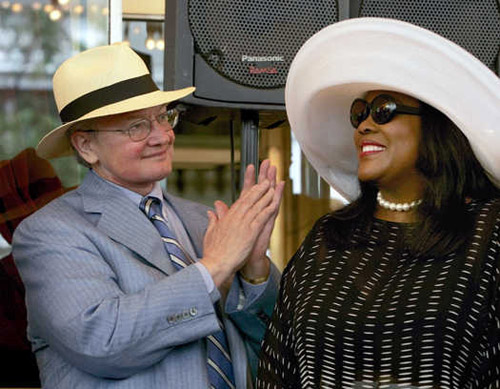 Mira Nair has a new film, “The Reluctant Fundamentalist.” Someone called it accidental timing, being released so soon after the bombing in Boston.  I long to know how Roger would dissect this movie, not just by its obvious cinematic quality, but by the politics of it, the nuances in human relationships, the layer of the layers.

The Cannes film festival is coming up and I know how eagerly Roger was awaiting “The Great Gatsby.” He has read the book by F. Scott Fitzgerald numerous times, even had Bill Nack recite the last page by memory at our wedding, but I don’t think he ever envisioned it in 3D and scored by Jay Z as only Baz Luhrmann could present it. He was jazzed by the thought of it. Luhrmann’s outsized “Moulin Rouge” was a high point at Cannes for Roger with its feverish red hue, and orchestral introduction. Lets hope Gatsby lives up to it.

My ritual is to open up my local Chicago newspapers and read Richard Roeper and Michael Phillips. Then I may search my subscription publications and/or go online to read A. O. Scott and Manohla Dargis in New York, Richard Corliss in Time, Ken Turan and Lisa Schwarzbaum in LA, Todd McCarthy in The Hollywood Reporter and Scott Foundas in Variety, Carrie Rickey and Steven Rea in Philadelphia and of course our very own critics from Ebert Presents At The Movies, Christy Lemire of the AP and Ignaty Vishnevetsky.  This is by no means an exhaustive list of the film critics we read. There are so many others we both admired.

When article after article decried the end of film criticism, Roger swam against the tide and praised this new Golden Age of Film Criticism. He said how fortunate we are to have the internet as a medium where more views can be shared, more writers nurtured, more diverse voices heard. He was generous that way. I remember when he first advanced the argument to the studios that legitimate online critics like James Bernardinelli should be admitted to movie screenings with the same privileges as the print critics. It was pretty radical at the time. Now our print critics are becoming a vanishing species, or have joined our online brethren and sisters.

Rogerebert.com is committed to both nurturing new writers and critics and giving seasoned writers a place to display their wares. We will be making announcements in the next few weeks about changes Roger was putting into place before he left us. We will announce other changes necessitated by Roger’s absence to keep giving you new and fresh reviews and articles and to expand the variety of articles we present.  Stay tuned. I think you will be pleased.

Yesterday, I attended a dinner for the Abraham Lincoln Library and Museum. We were giving the Lincoln Leadership Prize to former President Bill Clinton. After expounding on what it takes to make a leader of our nation (someone with a mission and a plan; who cares about people; can take a stand and explain and defend it; and who has the political savvy to execute it), he talked about how President Lincoln was great, not only for his Gettysburg Address, but for knowing how to make deals to get the votes he needed to pass the Thirteenth Amendment against slavery. He then talked about Steven Spielberg’s movie and how Roger Ebert got it right.  Yes Roger did get it right!  I miss him.