Baz Luhrmann's adaptation of "The Great Gatsby" isn't a disaster. Every frame is sincere. Its miscalculations come from a wish to avoid embalming a classic novel in "respectfulness" — a worthy goal, in theory. It boasts the third most imaginative use of 3D I've seen recently, after "U2 3D" and "Hugo." It's a technological and aesthetic lab that has four or five experiments cooking in each scene. Even when the movie's not working, its style fascinates.

That "not working" part is a deal breaker, though — and it has little to do with Luhrmann's stylistic gambits, and everything to do with his inability to reconcile them with an urge to play things straight.

If you've seen Lurhmann's "Strictly Ballroom," "Romeo + Juliet" or "Moulin Rouge," or watched "Gatsby" trailers, you know what you're in for: an epic melodrama that fuses old-movie theatrics and subjective filmmaking, period music and modern pop, real sets and unreal landscapes, psychological drama and speeded-up slapstick.

We see the book's Prohibition-era settings (East Egg and West Egg, New York City, and the sooty wasteland in between) through the eyes of the narrator, Nick Carraway (Tobey Maguire), who's writing a memoir-confession from an asylum. This framing device is inferred from statements Fitzgerald made in "The Crack-Up," and "Gatsby" often refers to itself as a book, so even though it isn't officially part of the source, it's hardly a blasphemous indulgence; still, it's one more buffer between viewer and story in a movie that already has more than its share.

All this busywork might astonish if Lurhmann's heart were in it—but is it? The guests at Gatsby's party are too obviously directed, and there's no sense of escalation in the gatherings. From frame one, they're Dionysian whirls of booze, lust and hero worship, minus the sense that that things are ebbing and flowing as they would at a real party. The CGI-assisted camera acrobatics feel obligatory. So do the anachronistic soundtrack mash-ups (modern hip-hop layered over ragtime piano and the like).

But in the film's dark second half, "The Great Gatsby" half-forgets its mandate to wow us and zeroes in on actors in rooms. Once that happens, the Luhrmannerisms distract from the film's true heart: the actions and feelings of its characters. Luhrmann didn't set out to make a PBS-style, bare-bones adaptation, but there are times when it feels as though he secretly wants to.

Once you get past the movie's opening eruptions of visual excess — hundreds of party guests boozing and hollering and doing the Charleston; CGI cityscapes that visualize 1920s New York by way of Warren Beatty's candy-colored "Dick Tracy"; a long expository talk between Gatsby and Nick in a careening computer-buffed roadster that moves as believably as the talking cab in "Who Framed Roger Rabbit" — "The Great Gatsby" settles into a traditional groove: scene, scene, montage, scene, burst of violence, moment of reflection. The movie wants to be a "kaleidoscopic carnival," to quote a phrase from the book's description of a Jay Gatsby party, but Luhrmann's instincts seem more traditional, even square, and the two impulses cancel each out. Once you've spent time with his cast, you understand why he was torn.

DiCaprio's Gatsby is the movie's greatest and simplest special effect: an illusion conjured mainly through body language and voice. On the page, the character is so mysterious, so much a projection of the book's narrator, that you'd think he'd be as unplayable onscreen as Kurtz or John Galt; he eluded Alan Ladd and Robert Redford, the role's previous inhabitants. And yet DiCaprio makes him comprehensible and achingly real. The actor's choices drive home the idea that Gatsby is playing the man he wishes he were, and that others need him to be. We see the calculations behind his eyes, but we also believe that he could hide them from the other characters — most of them, anyway.

DiCaprio's acting evokes Nick's description of the human personality as "an unbroken series of successful gestures." Luhrmann cuts some scenes to make it seem as if the character really is omniscient — as if he can see and hear for miles and read people's thoughts and feelings — and DiCaprio plays these moments with a mix of inscrutability and delight, as if Gatsby knows something we don't, but is too clever to say precisely what. (He could play Superman.) When Gatsby's deceptions are revealed and his illusions shattered, DiCaprio becomes at once terrifying and pathetic, a false idol toppling himself from his pedestal. In his final moment of realization, DiCaprio's blue eyes match the blue of Gatsby's pool, and his anguished face, framed in tight close-up, has a ghastly beauty. This is an iconic performance — maybe his career best.

The rest of the cast is nearly as impressive. Nick Carraway is almost as much of an abstraction as Gatsby — an audience surrogate, with touches of The Nice Guy Betrayed — but Maguire humanizes him, just as DiCaprio does Gatsby. It helps that he's played so many wry blank-slate types, but there's something else going on in his performance besides familiar notes — something deeper and sadder.

Carey Mulligan is physically and vocally right for Daisy Buchanan — when she flirts, the famous description of the character having "a voice like money" nearly makes sense — but the film doesn't idealize her, as Gatsby and Nick often seem to. There's a contradictory, complicated person there. She's matched — appropriately overmatched, really — by Joel Edgerton's Tom. The actor suits the book's description of the character as "hulking" and projects the jovial arrogance of a thug impersonating a cultured man with money; he's scary but life-sized, and always comprehensible. The small roles are well cast, too, with Elizabeth Debicki's Jordan Baker as a standout. The director is genuinely interested in his actors' performances, and in the characters' psyches. When the tale's simmering resentments detonate (notably in a scene near the end that takes pretty big liberties with the book) the result is a more powerful experience than crowd scenes and CGI panoramas can deliver.

There were times when I wished Luhrmann had made a smaller, squarer adaptation, because he seems to have the talent for it; I never would have imagined saying such a thing after seeing his other films, which have their merits but are hardly standard-bearers for subtlety. Alas, this "Gatsby" is so immense and overwrought — lumbering across the screen like the biggest, trashiest, loudest parade float of all time — that its intimacies feel like shared secrets between the director and the viewer. The movie's like a guest at a wild gathering who finds the frenzy tiresome and would rather be at home reading, but can't let on because he's supposed to be the life of the party. 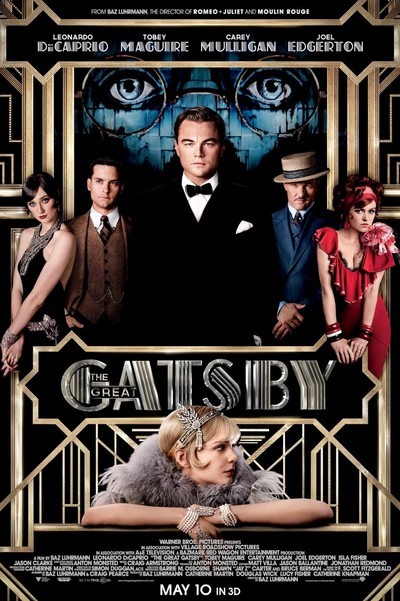