They Meet Cute on a train in Austria. They start talking. There is a meeting of the minds (our most erotic organs) and they like each other. They're in their early 20s. He's an American with a Eurail pass, on his way to Vienna to catch a cheap flight home. She's French, a student at the Sorbonne, on her way back to Paris. They go to the buffet car, drink some coffee, keep talking, and he has this crazy idea: Why doesn't she get off the train with him in Vienna, and they can be together until he catches his plane? This sort of scenario has happened, I imagine, millions of times. It has rarely happened in a nicer, sweeter, more gentle way than in Richard Linklater's "Before Sunrise," which I could call a "Love Affair" for Generation X, except that Jesse and Celine stand outside their generation, and especially outside its boring insistence on being bored.

There is no hidden agenda in this movie. There will be no betrayals, melodrama, phony violence, or fancy choreography in sex scenes. It's mostly conversation, as they wander the city of Vienna from mid-afternoon until the following dawn. Nobody hassles them.

"Before Sunrise" is so much like real life - like a documentary with an invisible camera - that I found myself remembering real conversations I had experienced with more or less the same words.

Jesse and Celine are played by Ethan Hawke and Julie Delpy.

You may remember him from "Dead Poets Society," "White Fang" or especially "Reality Bites," in which he played a character who is 180 degrees different from this one. She starred in Krzysztof Kieslowski's "White," as the wife who eventually regrets dumping her husband. Here she is ravishingly beautiful and, more important, warm and matter-of-fact, speaking English so well the screenplay has to explain it (she spent some time in the States).

What do they talk about? Nothing spectacular. Parents, death, former boyfriends and girlfriends, music, and the problem with reincarnation when there are more people alive now than in all previous times put together (if there is a finite number of souls, are we living in a period of a 5-to-1 split?). Linklater's dialogue is weirdly amusing, as when Jesse suggests they should think of their time together as a sort of "time travel," and envisions a future in which she is with her boring husband and wonders, "what would some of those guys be like that I knew when I was young," and wishes she could travel back in time to see - and so here she is, back in time, seeing.

A sexual attraction is obviously present between them, and Linklater handles it gently, with patience. There is a wonderful scene in the listening booth of a music store, where each one looks at the other, and then looks away, so as not to be caught. The way they do this - the timing, the slight embarrassment - is delicate and true to life. And I liked their first kiss, on the same ferris wheel used in "The Third Man," so much I didn't mind that they didn't know Orson Welles and Joseph Cotten had been there before them.

The city of Vienna is presented as a series of meetings and not as a travelogue. They meet amateur actors, fortunetellers, street poets, friendly bartenders. They spend some time in a church at midnight. They drink wine in a park. They find a way to exchange personal information by holding imaginary phone calls with imaginary best friends. They talk about making love. There are good arguments for, and against.

This is Linklater's third film, after "Slacker' (1991) and "Dazed and Confused" (1993). He's onto something. He likes the way ordinary time unfolds for people, as they cross paths, start talking, share their thoughts and uncertain philosophies. His first movie, set in Austin, Texas, followed one character until he met a second, then the second until he met a third, and so on, eavesdropping on one life and conversation after another. The second film was a long night at the end of a high school year, as the students regarded their futures. Now there's "Before Sunrise," about two nice kids, literate, sensitive, tentative, intoxicated by the fact that their lives stretch out before them, filled with mystery and hope, and maybe love.

NOTE: The R rating for this film, based on a few four-letter words, is entirely unjustified. It is an ideal film for teenagers. 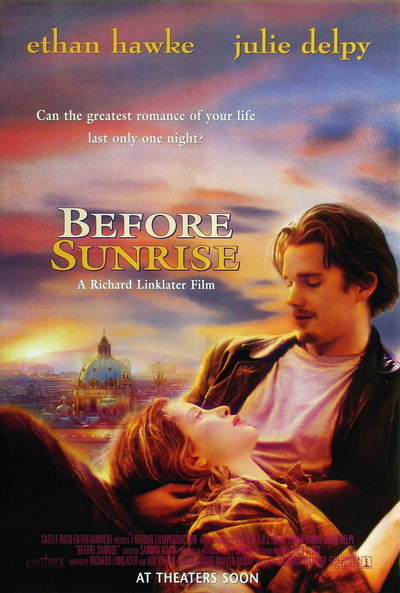