Check Into Quirky “Room 104” with the Duplass Brothers

I adore that HBO gave the Duplass brothers the budget for an anthology series that centers on a hotel room and the various people that travel in and out of its lonely confinement. The result, “Room 104,” premieres this Friday, July 28th and represents cable television at a more experimental tone than we often see, even in the era of Peak TV. Interestingly, in a time when everything people like on television is compared to film—note to TV critics, stop using the word “cinematic”—“Room 104” feels more like theater than anything else. All of the six episodes made available for press were two-handers (with an occasional third character supporting on a phone or television) and it’s interesting to watch a half-hour of TV given over to only a pair of actors, in a time when ensembles seem to grow in size year after year. As with any anthology series, the results are incredibly hit and miss but I appreciate the effort from the front of the room to the back.

Each week, you’ll meet new residents of Room 104, a nondescript room in an unnamed motel. The casts, writers, and directors change each week, although co-producer Mark Duplass is credited with several of the screenplays. Working with brother, Jay Duplass, they’ve assembled a diverse array of actors and directors, many of them from the indie circuit on which they’re famous but not yet household names. Directors include Sarah Adina Smith (“Buster’s Mal Heart”), Patrick Brice (“The Overnight”), So Yong Kim (“Lovesong”), Chad Hartigan (“Morris From America”), Anna Boden & Ryan Fleck (“Half Nelson”), Megan Griffiths (“Lucky Them”), and Marta Cunningham (“Valentine Road”), and each week includes a new cast of characters. Tones and styles change too, with the six sent for press varying from horror to drama to comedy. 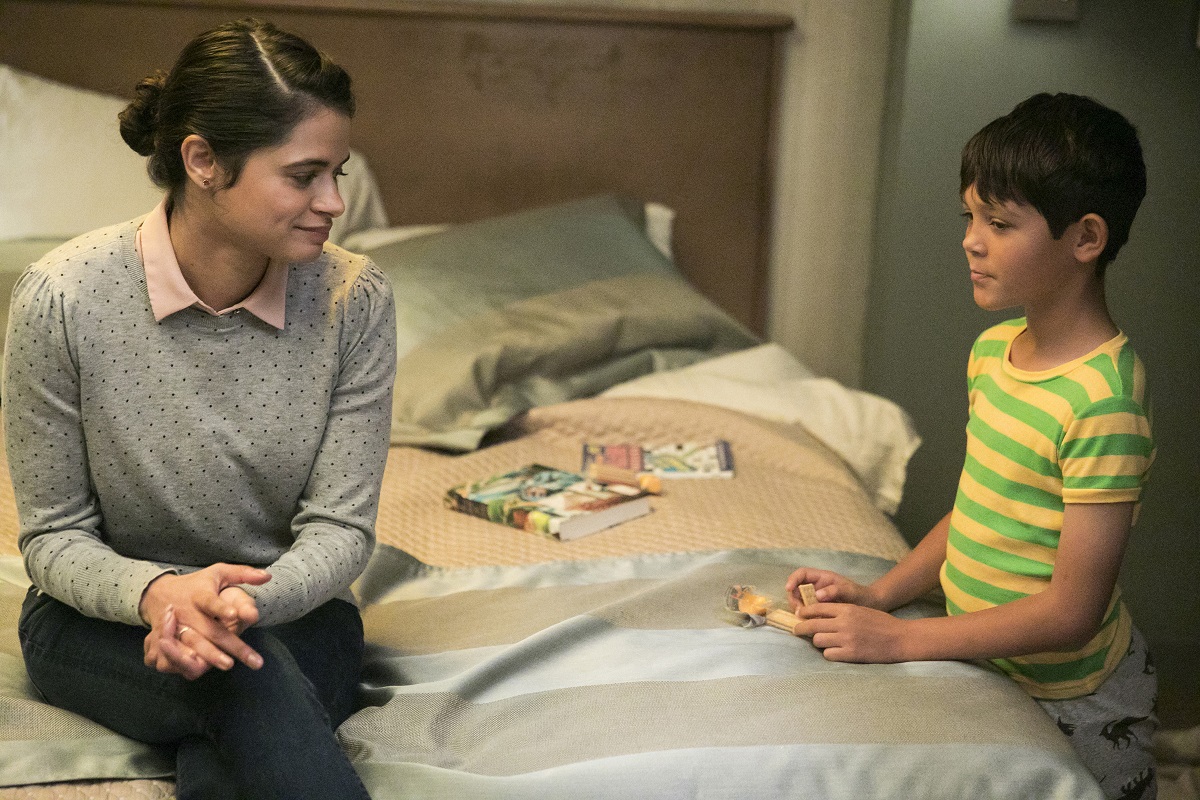 Take the premiere, written by Duplass and directed by Smith, starring Melonie Diaz as a babysitter for an unusual child. The polite boy named Ralph swears there’s another kid in the bathroom named Ralphie, who they don’t want to make angry. And then he tells her a story that implies something deadly happened to his mother. It’s all delightfully creepy although the final twist doesn’t quite pay off, as is so often the case in half-hour scripts that feel more inspired by “Tales From the Crypt” than they probably should have been. Episode three, “The Knockadoo” (HBO sent a seemingly random six for review, not in the order they’ll air) stars Orlando Jones as a cult priest performing a ceremony on a young woman (Sameerah Lugmaan-Harris) seeking transcendence. Other episodes sent to press include a piece set in 1997 in which a young man (Karan Soni) tries to talk his mother (Poorna Jagannathan) through emailing him a much-needed manuscript he accidentally left at home; a housekeeper (Dendrie Taylor) who essentially has an interpretative dance with the younger version of herself (Sarah Hay) while cleaning the room; two MMA fighters (Natalie Morgan & Keta Meggett) who try to rig the system only to reveal that they’re too competitive to do so; and an octogenarian couple (Ellen Geer and the phenomenal Philip Baker Hall) who return to the room in which they spent their first night decades earlier.

Of the six episodes sent to press, I’d say only half of them really work, but “Room 104” is the kind of show that it doesn’t feel right to pull apart and judge piece by piece. It’s the effort that impresses, the idea that the era of multi-million dollar shows like “Game of Thrones” and “Fargo” needs to still find space for one-set pieces like this that focus on character, circumstance, and confident direction. So even though I didn’t like at least half of this sextet, I’m eager to see the other six.