Toni Collette radiates smarts, humor and a world-weary cool in "Lucky Them."

Director Megan Griffiths’ charming little indie is pleasing on a number of levels, but much if its allure comes from the sexy, flawed, complicated woman at its center. Collette’s Ellie Klug, a veteran alt-rock journalist in Seattle, has been around the block more than a few times, made her share of mistakes and is unapologetic. Strong but vulnerable, and always interesting, she is a rare find in movies these days.

When we first meet Ellie, she’s slinking out of bed after yet another one-night stand after yet another show. The late hours, the functional alcoholism, the hook-ups with twentysomething musicians—they’re all part of the rut she’s stuck in, full of self-destructive habits that go beyond the casual consequences of the gig.

When her editor assigns her a piece on the 10-year anniversary of the disappearance of influential, young rock star Matthew Smith, she’s reluctant for several reasons—the primary one being, she was romantically involved with Smith when he went missing. The general assumption has been that he flung himself off a steep and severe waterfall, but no one knows for sure; in the ensuing years, he’s achieved a cult status just shy of Kurt Cobain’s.

Oliver Platt stands out in the small, supporting role as Ellie’s longtime editor, Giles, but even in a few scenes, the two establish the believable give-and-take of people who’ve worked together too long and know each other too well. Their banter reflects an obvious comfort level, tinged with a healthy amount of tension. After lighting up a joint in his office (which is lined with posters for bands like The Afghan Whigs and Mudhoney, lending authenticity), Giles insists that the magazine needs this big cover story to bolster its readership, and Ellie needs this big cover story to bolster her career.

And so, with a handful of tips, she goes off in pursuit of her elusive, lost love. Tagging along is Charlie (Thomas Haden Church), an odd dude she went out on a couple of dates with years ago and reconnects with at a bar.  A sudden dot-com millionaire and dilettante, Charlie now fancies himself a documentary filmmaker and agrees to finance Ellie’s investigation if he can turn her findings into a movie. (Spoiler alert, sorta: Their hunt leads to an inspired cameo and an unexpected moment of poignancy.)

This may sound like a total contrivance (and it is), but Haden Church is such a hoot and he and Collette have such an awesomely kooky chemistry, every second they’re together is a joy. They’re not quite opposites but they’re extremely different people who form an enjoyable, unlikely friendship while traveling around and searching for clues in a shiny, new RV. The clueless Charlie has a knack for saying the most inappropriate thing at every opportunity, and despite the consistently deadpan monotone of his delivery, Haden Church always keeps the character unpredictable. It’s some of his finest comic work.

The other man in Ellie’s life, sort of, is an up-and-coming singer-songwriter named Lucas (Ryan Eggold), whom she first meets when he’s busking on the sidewalk. Lucas falls into the pattern that she knows is toxic for her—he’s a young, good-looking musician—but he’s so enormously likable and he pursues her so ardently, it’s hard for her to resist. The script from Emily Wachtel (for whom this story has some semi-autobiographical elements) and Huck Botko also finds room for another sassy woman: Nina Arianda as Ellie’s obligatory, wisecracking best pal, a bartender who’s always available to chime in on her love life.

Yes, there is some formula here. You could easily imagine "Lucky Them" as the pilot for some CBS primetime dramedy, from its quirky characters and lived-in places to the lighting and pacing. But you also wouldn’t mind tuning in each week to see what happened next. 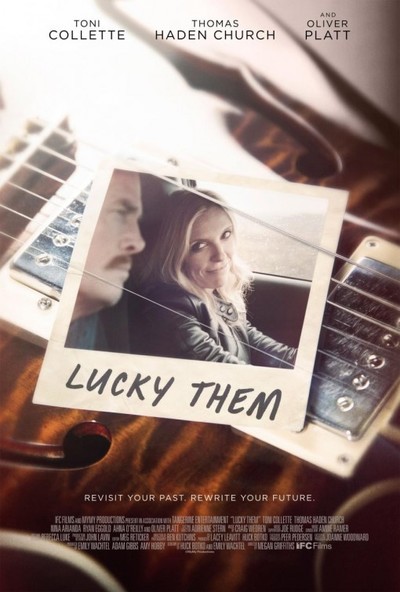